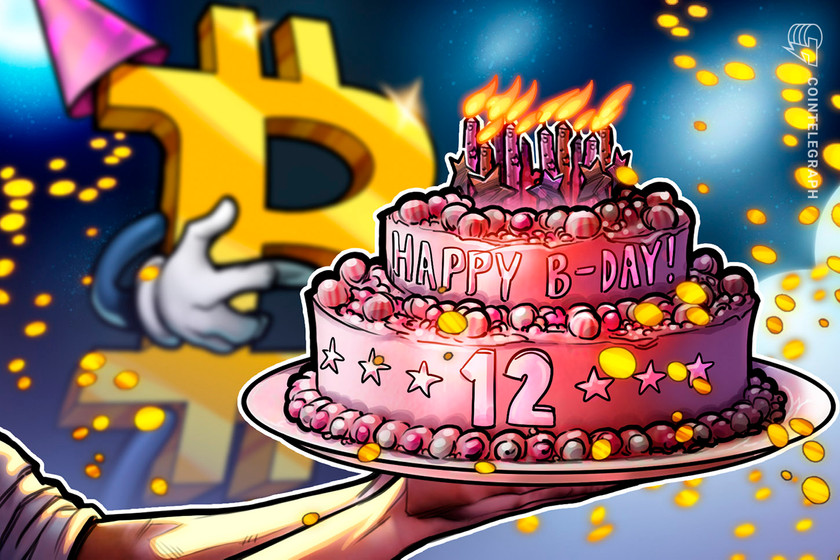 While the crypto community decides whether Bitcoin (BTC) was born — or merely conceived — 12 years ago, the fact is that Oct. 31, 2008, remains one of the most notable dates in humanity’s modern history. Exactly 12 years ago, Satoshi Nakamoto published what some have described as “a new bible” — Bitcoin’s white paper. Designed as a brand new “purely peer-to-peer version of electronic cash,” many see the creation of Bitcoin as a response to a global financial crisis.

Cointelegraph’s video team talked to Adam Back, co-founder and CEO of Blockstream, about the birth of Bitcoin. Check out the video here:

Although Bitcoin has recently become more appealing than both Jesus and sex, at least among Reddit users, let’s not forget that it’s only Bitcoin’s 12th anniversary and that many great achievements and challenges still lie ahead, though for this real-world saga, we can only hope to know how this story will end and who will emerge as the victor.

Cointelegraph has reached out to Bitcoin’s friends and supporters, asking them to send their birthday wishes to the Big BTC.

“For Bitcoin’s birthday, I hope it brings financial freedom to billions of people around the world.”

“My wish for the 12th birthday of BTC is that it marks the new chapter for BTC where it starts going from a passive capital (store of value) to actively deployed capital e.g., used as collateral in financial products. I think that’s the next logical step on Bitcoin’s path to becoming a reserve currency.”

“The 12th anniversary of the Bitcoin white paper, which took nearly two years to reach a point where anyone was even able to buy a pizza with 10,000 Bitcoins, is an astounding example of Bill Gates’ mantra that most people overestimate what can be done in a year, but underestimate what can be accomplished in a decade. Today, as Bitcoin passes a market cap of $260 billion, we have further market validation of Satoshi’s paradigm and of the global hunger for fair, self-sovereign vehicles for wealth creation and management.”

“A robust network, an antifragile community and a high price”

“I’d wish Bitcoin continued success in its adoption and many more years of a healthy, global network powered by the kind and caring miners.”

“My wish is that either the European Commission, Switzerland or the United States decide to adopt the Bitcoin blockchain towards a new constitutional right of every citizen who has a decentralized blockchain on-chain wallet with his/her ID. This wallet will also be used by each country when and if they decide to adopt some UBI scheme.”

Scott Melker, trader, investor and the host of The Wolf Of All Streets podcast:

Taylor Pearson, entrepreneur and author of The End of Jobs:

“May the censorship resistance rise up to meet you. May the hashpower be always at your back. May the BIP-32 paths shine warm upon your blocks; the fees fall softly on your security and until we meet again, may Satoshi hold you in the palm of his hand.”

“Bitcoin is only 12 years old. It’s a youngster. It still has a lot to learn and plenty of time to grow. In another 10-15 years, with wisdom and maturity, BTC, its siblings and offsprings may be a force to be reckoned with in the global financial system. I wish BTC the best of luck for a prosperous future.”

“Happy 12th birthday to Bitcoin! I wish every person who has no (or limited) access to traditional financial investments can receive some satoshis today. Bitcoin for the masses!”

These quotes have been edited and condensed.