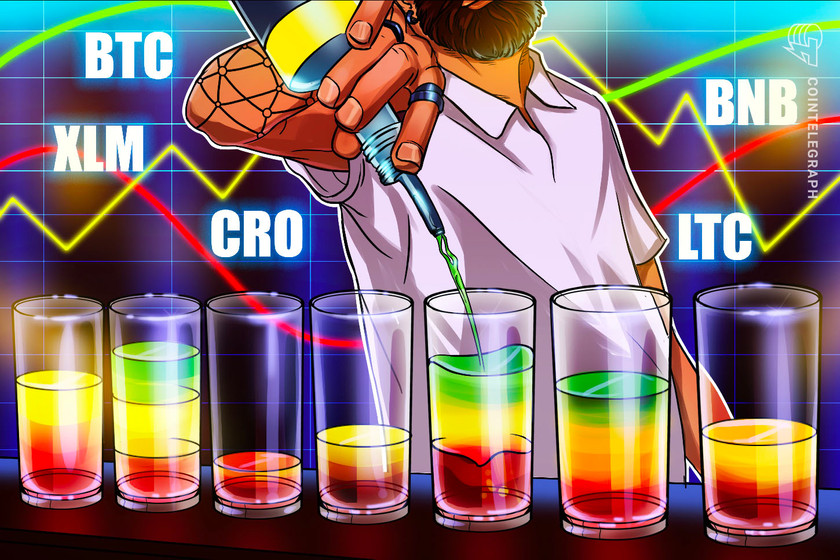 Data from Skew shows Bitcoin’s (BTC) spot volume on LMAX Digital, an exchange that mainly caters to institutions, has overtaken retail-oriented exchanges. This signals that institutional investors could be building up positions as they expect the price to move higher in the future.

Along with spot purchases, institutional investors’ participation in the derivatives market has also increased. Data from Arcane Research shows that a record number of investors are taking delivery of Bitcoin from the Bakkt Bitcoin exchange.

Another metric that can be useful for traders is volatility. Bitcoin options data shows that the implied volatility of at the money options has dropped to a 16-month low. This suggests that traders do not expect a large down move in the near future, hence, they are not willing to pay a greater amount to hedge their positions.

Although data suggests that institutional investors are positioned for an upside move, retail traders should keep a close watch on the price action and take large bets only after a trending move starts.

Let’s study the charts of the top-5 cryptocurrencies that could start a trending move next week.

Bitcoin (BTC) has been holding above the 20-day exponential moving average ($11,137) for the past few days. The buyers purchased the dip to the $11,165 support on Oct. 20, which suggests accumulation at lower levels.

If the bulls can push the price above the downtrend line, the BTC/USD pair could retest the $11,719 resistance. A breakout of this level may resume the up-move with the first target at $12,000 and then $12,460.

Both the short-term and the long-term moving averages are sloping up and the relative strength index is above 61. This suggests that the bulls are in control.

This positive view will be invalidated if the pair turns down from the downtrend line and plummets below the 20-day EMA. Such a move could pull the price down to the next support at $10,500.

The 4-hour chart has formed a bearish descending triangle pattern that will complete on a breakdown and close (UTC time) below $11,165. This bearish setup has a pattern target of $10,611.

However, if the bulls can propel the price above the downtrend line, the bearish pattern will be invalidated. Such a move could attract short covering by the bears, resulting in a rally to $12,000.

The gradually upsloping 20-EMA and the RSI in the positive territory suggests a minor advantage to the bulls.

Stellar Lumens (XLM) broke below the 200-day simple moving average ($0.077) on Sep. 21 but the bears could not capitalize on this move and sink the price below $0.066841. This shows buying by the bulls at lower levels.

If the pair stays above the moving averages, the buyers will make one more attempt to drive the price above $0.084584. If they succeed, the pair could start a new uptrend that may rally to $0.10.

The gradually upsloping moving averages and the RSI in the positive zone suggest that the bulls have the upper hand.

The pair had broken above the channel but the bulls could not clear the hurdle at $0.084584. However, on the downside, the bears have not been able to drag the price below the 38.2% Fibonacci retracement level of $0.079239.

This suggests that the bulls will again try to thrust the price above the overhead resistance. If they succeed, a rally to $0.091042 will be on the cards.

Contrary to this assumption, if the bears sink the price below the 20-EMA, a drop to $0.076546 is possible. A break below this level could result in a decline to the support line of the channel.

The descending triangle completed on Oct. 14 when Crypto.com Coin (CRO) plummeted and closed (UTC time) below the $0.144743 support. This bearish setup has a target objective of $0.10607.

Hence, if the CRO/USD pair turns down from the 20-day EMA, it will suggest that the sentiment is bearish. The sellers will then again try to sink the price below the 200-day SMA. If they succeed, the decline could extend to $0.10607.

The 20-day EMA is sloping down and the RSI has plummeted deep into the oversold territory, which suggests that the advantage is with the bears. However, a relief rally cannot be ruled out in the short-term.

The RSI on the 4-hour chart has also plunged deep into the oversold territory. This suggests panic selling and usually, after such a round of such intense selling, a minor pullback occurs.

Any relief rally is likely to face selling at the 20-EMA as bears will try to consolidate their advantage.

This bearish view will be invalidated if the pair rises and sustains above the breakdown level of $0.144743. Until then, every rally is likely to be viewed as a selling opportunity.

Binance Coin (BNB) turned down from $31.9798 on Oct. 16 but the bulls purchased the dip to the immediate support at $29.5646. This suggests that the previous resistance level has now flipped to support.

If the buyers can thrust the BNB/USD pair above the $32– $33.3888 resistance zone, the momentum could pick up and a retest of the all-time highs will be on the cards.

Contrary to this assumption, if the bears sink and sustain the pair below the 20-day EMA, it will signal weakness.

The bears are defending the $31–$32 zone aggressively. The flattened 20-EMA and the RSI just above the midpoint suggests a balance between supply and demand.

This balance will tilt in favor of the bears if they can sink and sustain the price below $29.5646. If this support cracks, a drop to $28 and then to $26 is possible.

Conversely, if the bulls propel the price above the overhead resistance zone, it will signal the resumption of the uptrend.

Litecoin (LTC) is attempting to form an inverse head and shoulders pattern that will complete on a breakout and close (UTC time) above $51.50. The flat moving averages and the RSI below the midpoint suggest a balance between supply and demand.

However, the long tails on the candlesticks on Oct. 2 and Oct.16 show that the bulls are buying the dips to the trendline. If the bulls can push the price above the moving averages, the LTC/USD pair could again rise to $51.50.

A breakout and close (UTC time) above this level could start a new uptrend. The pattern target of the reversal setup is $61.50.

This bullish view will be invalidated if the bears sink the pair below the trendline. Such a move could keep the pair range-bound for a few more days.

The 4-hour chart shows that the rebound off the trendline is struggling to sustain above $47.7845. This suggests that buying dries up at higher levels. The 20-EMA is sloping down and the RSI is in the negative zone.

Therefore, the bears may take one more shot at breaking the trendline support. If they manage to do that, the pair could drop to $42.