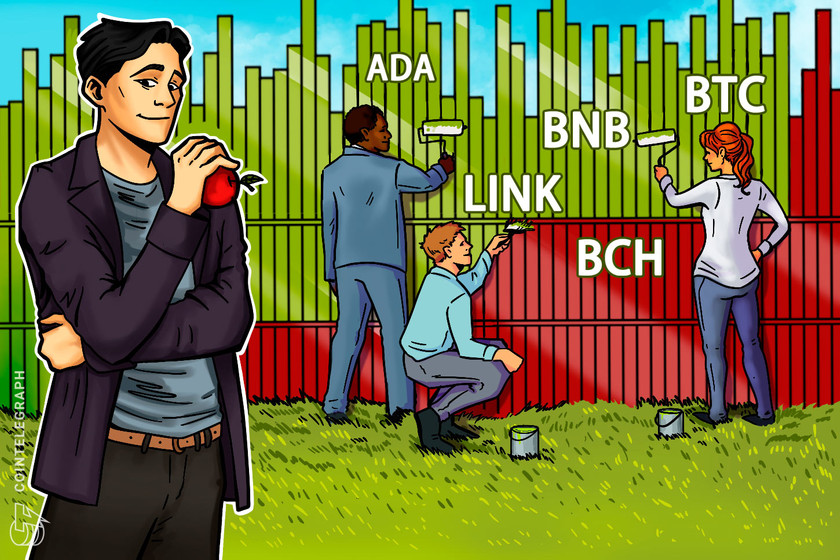 Bitcoin looks strong and the indicators point to a possible break above $14,000 while altcoins could underperform in the short-term.

Bitcoin (BTC) has rallied about 90% year-to-date and has risen close to 191% from its March lows. The rise has been gradual without much fanfare, which suggests that crypto believers are the ones who have been buying in 2020.

October’s monthly close at $13,798.99 is the highest ever, surpassing the December 2017 close at $13,789.68. The strong performance of Bitcoin may now attract the momentum players and the speculators who look to benefit from the strength.

If that happens, then Bitcoin could pick up momentum and surprise investors to the upside. This could result in traders selling their altcoins to invest in Bitcoin. Hence, the altseason looks to be over in the short-term.

Three of the top-five cryptocurrencies analyzed today may offer a trading opportunity to the upside while the other two may continue to decline further. Let’s watch the critical levels that may indicate the start of a trending move.

Bitcoin rose above the $13,973.50 overhead resistance and reached an intraday high of $14,101.91 on Oct. 31. Although the bulls failed to sustain the price above the resistance, they have not given up much ground to the downside.

This suggests that traders are not closing their positions in a hurry because they expect another attempt by the bulls to propel the price above the resistance.

Both the 10-day exponential moving average ($13,309) and the 50-day simple moving average ($11,505) are sloping up and the relative strength index is in the overbought territory. This suggests that the bulls are in command.

However, if the bulls again fail to sustain the price above $14,000, then the short-term traders may dump their positions and the bears could initiate short positions. A break below the 10-day EMA will be the first sign that the momentum has weakened.

The bears are likely to gain an upper hand if the pair drops and sustains below the critical support at $12,460.

The pair is currently attempting to hold above the 10-EMA. If that happens and the bulls succeed in pushing the price above the $13,973.50–$14,101.92 resistance zone, a new uptrend is likely.

However, the bearish divergence on the RSI suggests that the upside momentum is weakening. If the sellers can sink the pair below the 10-EMA, a drop to the 50-SMA and then to $13,000 will be on the cards. The strong support in the $12,750–$13,000 zone could attract buyers.

Binance Coin (BNB) broke below the $28.50 support on Oct. 30 but managed to bounce from the intraday lows and close above $28.50. However, the doji candlestick pattern on Oct. 31 suggested indecision among the bulls and the bears.

The bears are currently attempting to resolve the indecision to the downside and gain the upper hand. If the BNB/USD pair breaks and closes below $27.50, it will increase the possibility of a drop to $24.86.

The downsloping 10-day EMA ($29.47) and the RSI in the negative zone suggests that the path of least resistance is to the downside.

Contrary to this assumption, if the price reverses direction and rises above $28.50, then it will suggest a few more days of consolidation.

Both moving averages are sloping down and the RSI is close to the oversold zone, suggesting an advantage to the bears.

This view will be invalidated if the pair turns around and rises above $29. Such a move will suggest accumulation at lower levels and will increase the possibility of a rise to $30.50.

Cardano (ADA) broke below the bearish rising wedge pattern on Oct. 26 and plunged to the $0.0891 support. The bulls are currently attempting to defend the support and push the price above the moving averages.

However, the downsloping 10-day EMA ($0.988) and the RSI below 43 suggest that bears are in control. Therefore, the bounce is likely to face stiff resistance at the moving averages.

If the ADA/USD pair turns down from this resistance, the bears will again try to break the $0.0891 support. Such a move will open the gates for a decline to the next support at $0.0755.

This bearish view will be invalidated if the bulls can push and sustain the price above the moving averages. Such a move could result in a rally to $0.11.

The bulls have pushed the price above the 10-EMA on the 4-hour chart. The pair could now move up to the 50-SMA where bears may again step in and sell.

Although the 50-SMA is still sloping down, the 10-EMA is attempting to turn up and the RSI has risen to the midpoint, which suggests that the selling pressure has reduced in the short-term.

However, if the pair turns down from the current levels or the 50-SMA, the bears will once again try to sink the price below the $0.0891 support. If they succeed, the next leg of the down move could begin.

Bitcoin Cash (BCH) has formed a symmetrical triangle, which usually acts as a continuation pattern. However, as this setup suggests indecision among the bulls and the bears, it is better to wait for the price to break above the triangle before taking a directional bet.

Both moving averages are sloping up and the RSI is above 59, which suggests that the bulls have the upper hand. If the bulls can push and sustain the price above the triangle, the BCH/USD pair could move up to $280 and then to $296.87.

Contrary to this assumption, if the price breaks below the triangle, the BCH/USD pair could drop to the critical support at $242. The 50-day SMA ($239) is placed just below this support, hence, the bulls may buy a drop to this zone.

The bulls had pushed the price above the resistance line of the symmetrical triangle but they could not sustain the higher levels and the bears have dragged the price back into the triangle.

However, if the pair bounces off the 50-SMA or the 10-EMA, the bulls will make one more attempt to propel the price above the triangle. If they succeed, the momentum could pick up and a rally to $280 is likely.

This positive view will be negated if the price breaks below the moving averages and drops below the symmetrical triangle.

Chainlink (LINK) has been trading inside an ascending channel for the past few days. Although the pace of rise has been slow, the altcoin has been making successive higher highs and higher lows.

The LINK/USD pair is currently correcting after turning down from the overhead resistance at $13. Both moving averages have flattened out and the RSI is close to the midpoint, suggesting a balance between supply and demand.

The bulls are likely to purchase the drop to the support line of the channel. If the price rebounds off this support with strength, the bulls may again attempt to push the pair above $13.

This positive view will be invalidated if the bears sink the price below the channel. Such a move could drag the price down to $8.3817 and below that to $7.2869.

The bulls are currently attempting to defend the uptrend line. If they can push the price above the downtrend line, the pair could start its journey towards $13.

However, the 10-EMA has flattened out and the RSI has been trading in the negative territory, which suggests that bears are attempting a comeback in the short-term.

If the bears can sink the price below the uptrend line, the pair could drop to the support line of the channel. The bulls will attempt to defend this support and if they succeed, the pair may rise to the downtrend line.