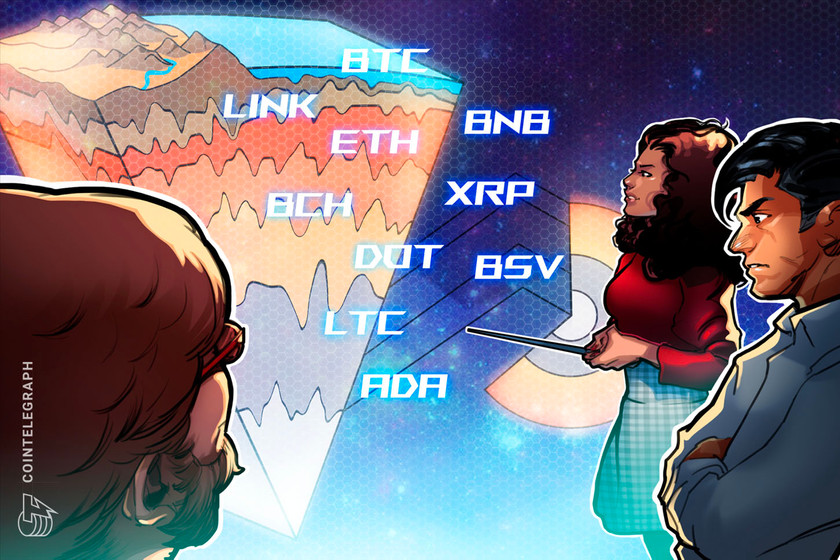 Bitcoin and several altcoins are showing signs of breaking above their overhead resistance levels, which suggests bulls remain in control.

Billionaire investor Stanley Druckenmiller became the latest famous name to disclose a Bitcoin position. Although Druckenmiller did not specify the quantity he had purchased, he did say that Bitcoin will outperform gold a lot more “because it’s thinner, more illiquid, and has a lot more beta to it.”

Paul Tudor Jones, Stanley Druckenmiller, and Bill Miller are some of the most successful traders and investors on Wall Street. A stamp of approval from them is likely to attract several other investors who may want to diversify their portfolio and outperform the markets.

In further validation for the crypto space, controversial Australian politician Cory Bernardi has called Bitcoin (BTC) “the millennial’s version of gold.” Even though Bernardi said that risks remain, he believes they are similar to that of any other asset class.

Alex Saunders, founder of the crypto education site Nuggets News, views the endorsements for cryptocurrencies by high-profile figures as a sign of changing times and earlier this week the analyst predicted that Bitcoin price will reach $1 million by 2030.

These fundamental points are long-term positives for cryptocurrency prices. However, let’s analyze the charts of the top-10 cryptocurrencies to find out the path of least resistance in the short-term.

Bitcoin (BTC) had formed an inside day candlestick pattern on Nov. 10, which showed indecision among the bulls and the bears. The uncertainty has been resolved to the upside today with the bulls attempting to push the price above the $16,000 resistance.

If the bulls succeed, the BTC/USD pair could start the journey towards the next target objective at $17,200. This level is likely to be the last stop before the pair retests the all-time highs.

The rising moving averages and the relative strength index in the overbought zone suggest that bulls are in command.

Ether (ETH) formed inside day candlestick patterns for three consecutive days from Nov. 8 to 10. This uncertainty has today resolved to the upside, which suggests that the bulls have absorbed the selling and have established their supremacy.

If the bulls can sustain the price above the resistance line of the wedge, it will invalidate the bearish setup. That will open the gates for a retest of the critical overhead resistance at $488.134. A breakout and close above this level could resume the up-move.

The first target on the upside is $520 and if the ETH/USD pair can ascend this level, a move to $550 is possible. The upsloping moving averages and the RSI in the positive territory suggest that bulls are in command.

Contrary to this assumption, if the price turns down from the current levels and breaks below the 20-day EMA ($418), it will signal that the bears are aggressively defending the wedge. They will then try to pull the price down to the 50-day simple moving average at $382.

The bulls pushed XRP above the overhead resistance at $0.26 on Nov.10 but failed to sustain the breakout. This suggests selling at higher levels, but the positive thing is that the bulls have not allowed the price to break below the moving averages on the downside.

Repeated jumps above a resistance level tend to weaken it. The bulls are currently again attempting to propel the XRP/USD pair above $0.26. If they succeed in sustaining the price above this level, a new uptrend is likely.

The first target on the upside is $0.30. The RSI in the positive territory and the gradually upsloping 20-day EMA ($0.248) suggest that bulls have the upper hand.

This positive view will be invalidated if the price turns down from the current levels and breaks below the moving averages. Such a move could drag the pair down to the support at $0.2295.

Chainlink (LINK) has been trading close to the overhead resistance at $13.28 for the past few days. A tight consolidation near a resistance usually ends with a breakout favoring the bulls.

If the price closes above $13.28, it will complete an inverse head and shoulders pattern that may signal the start of a new up-move. The target objective of this setup is $19.2731.

The upsloping moving averages and the RSI in the positive territory suggest that bulls are in control.

This bullish view will be invalidated if the price turns down sharply from the current levels. Such a move could result in profit-booking by short-term traders. A break below $9.7665 will signal a possible deeper correction to $7.30.

Bitcoin Cash (BCH) is struggling to rebound off the 20-day EMA ($257). This suggests a lack of urgency among the bulls to buy at these levels as they may not be confident that the altcoin will rise above $280.

The bearish divergence on the RSI also suggests that the momentum may be weakening. If the 20-day EMA support cracks, the BCH/USD pair could drop to the 50-day SMA ($245) and then to $231.

This negative view will be invalidated if the pair rebounds off the current levels and breaks above the $272 to $280 resistance zone. The flattish 20-day EMA and the RSI close to the midpoint suggest a range-bound action in the short-term.

If the range expands to the upside and the bulls push the price above the moving averages and the overhead resistance at $30, the BNB/USD pair could rally to the $32 to $33.3888 zone.

Conversely, if the range expansion happens to the downside, the bears will try to sink the pair below the $25.6652 support.

Polkadot (DOT) is currently stuck close to the midpoint of the $3.80 to $4.95 range. However, as long as the price sustains above the moving averages, the bulls will try to push the price to the resistance of the range.

The gradually upsloping 20-day EMA ($4.29) and the RSI in the positive zone suggest a marginal advantage to the bulls. A break above $4.95 could push the price to the next resistance at $5.5899.

Conversely, if the price again turns down from $4.95, the DOT/USD pair may remain range-bound for a few more days. A break below the moving averages will be the first sign that the bulls have surrendered the advantage to the bears.

Litecoin (LTC) has bounced off the 20-day EMA ($56.75), which suggests that the sentiment remains positive and the bulls are buying on dips. The bulls will now try to push the price to the overhead resistance at $64.

Traders can keep an eye on the RSI as it has formed a symmetrical triangle. A breakout of the triangle will increase the possibility of a break above $64 while a break below the triangle could pull the price below the 20-day EMA.

Currently, the upsloping moving averages and the RSI in the positive zone suggest that bulls have the upper hand. This advantage could shift in favor of the bears if the support at $56.50 gives way. Such a move could drag the LTC/USD pair to $51.

Cardano (ADA) has been sustaining above the moving averages for the past few days. The bulls are now likely to attempt to push the price above the overhead resistance at $0.1142241.

If they succeed, the ADA/USD pair will complete a double bottom pattern that has a target objective of $0.1391. The upsloping moving averages and the RSI in the positive territory suggest an advantage to the bulls.

Contrary to this assumption, if the price turns down from $0.1142241, the pair may remain range-bound for a few more days.

The advantage will tilt in favor of the bears if the price reverses direction and breaks below the moving averages. If that happens, the pair could drop to the critical support at $0.0893.

Bitcoin SV (BSV) remains range-bound but the failure of the bulls to push the price above the moving averages suggests a lack of demand at higher levels. The bears will now try to sink the price to the critical support at $146.

Both the moving averages are flat and the RSI is just below the midpoint, which suggests a balance between supply and demand. Even if the BSV/USD pair dips to $146, the bulls are likely to defend this level.

A strong bounce off the support of the range could extend the stay inside the range. Contrary to this assumption, if the BSV/USD pair turns up from the current levels and breaks above the downtrend line, then it can move up to $181.