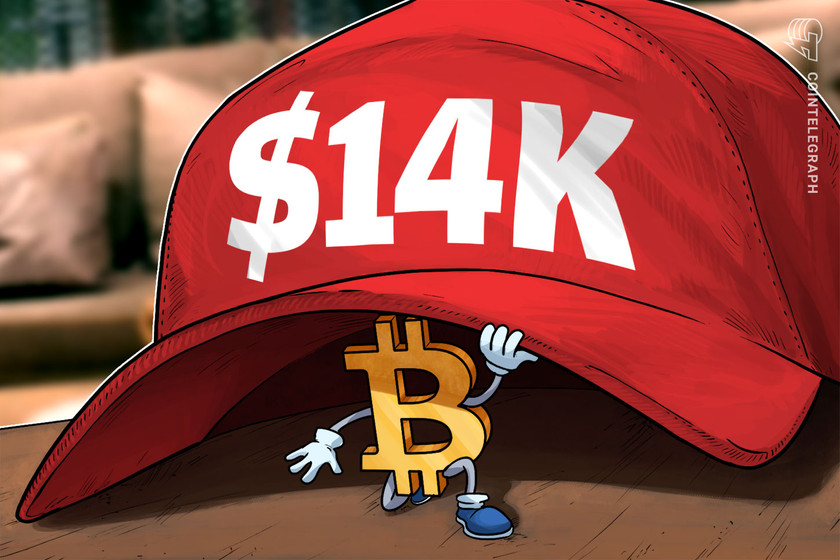 Both the 2016 and 2020 U.S. elections have seen little volatility in the price of Bitcoin, but the major multi-year resistance at $14K may finally break if history repeats itself.

While most investors and traders anticipated massive volatility to occur through the election hours, little has happened. Bitcoin’s price is still relatively stable and hovering under the crucial resistance of $14,000.

At the same time, Bitcoin’s price has been moving in tandem with equity markets over the past 24 hours.

The weekly chart is showing a very healthy setup as the price movements look natural and organic via testing every previous support and resistance levels before continuation occurs.

As the chart shows, this structure has been established with the $10,000 level, after which the price of Bitcoin rallied towards the current price levels of $13,800.

In that regard, a correction towards the $11,500 region would be relatively healthy for the markets, which could see another support/resistance flip.

These support/resistance flips are quite common, as they also occurred at the start of the previous cycle in 2016.

During this year, a significant number of range-bound constructions were seen. This occurs until the price of a certain asset enters price discovery, resulting in possible parabolic movements.

An interesting perspective is that the current run-up of Bitcoin is similar to the one in 2016. In the weeks before the election of 2016, the U.S. Dollar Currency Index dropped substantially. This drop caused the price of Bitcoin to run from $600 to $740, a rally of more than 20%.

However, not much volatility occurred during the election itself. The volatility started to kick off when the election results were confirmed as the vertical red line shows. The price of Bitcoin moved by 6% in a few hours while the U.S. Dollar showed weakness.

The primary question will remain whether the election results will trigger volatility as the markets hold their breath.

Therefore, the big moves for Bitcoin and markets, in general, may occur after the election results are confirmed similar to four years ago.

The current pre-election chart is showing many similarities with the pre-election movements of 2016. A similar drop in the U.S. Dollar Currency Index has been pushing the prices of assets up.

This meant an increase in the price per Bitcoin from $10,600 to $13,800, a rally of 30% in a matter of weeks. The significant difference currently is the stabilization of the U.S. Dollar, while Bitcoin is still being resilient and continuing its upward momentum.

However, the 4-hour chart is showing the possibility of a bearish divergence to emerge on the charts. Bitcoin’s price has frequently been pushing towards the $14,000 barrier, just taking liquidity above the high.

These breakouts don’t entirely show strength as they continue to get rejected. In that regard, the crucial breaker would be the area between $13,850-13,975 for any continuation of the price. If that breaks, a potential target of $15,000 is on the table.

However, if it fails to break, a range support test at $13,000-13,200 seems inevitable. As discussed previously, a further correction wouldn’t be unhealthy for the markets as that may warrant a very healthy build-up for the bull cycle itself.

The 5-day chart shows a likely scenario in the case of a lower timeframe breakdown. Thus, if the $13,900 area continues to hold as resistance, a correction to the $11,500-11,800 area would not come as a surprise.

Such a correction would grant another support/resistance flip and further compression before the next impulse wave can start.

Once the price of Bitcoin is done with the accumulation and compression, a shot toward new all-time highs may come quicker than expected.