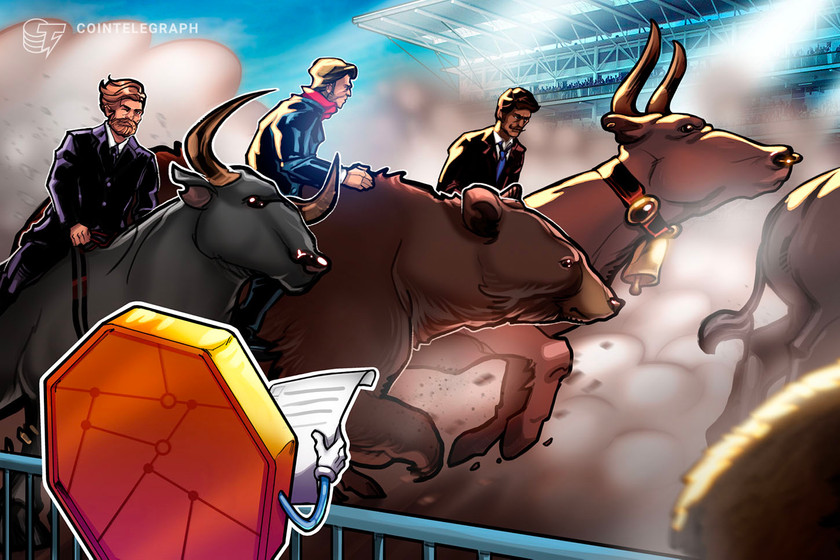 As the U.S. stock market enters earnings season, analysts explain how Bitcoin could perform after earnings and the presidential election.

Tech-heavy stock market indices, including the Nasdaq Composite and the S&P 500, have begun to recover. Amazon posted high pandemic sales that led profits to climb threefold and reported a 37% spike in revenue. Facebook also surpassed Wall Street expectations, achieving $21.5 billion in revenue during the third quarter.

As such, Svenson hinted that correlation would likely return: “The only other week in 2020 with a lack of correlation was at the bottom of the Global Pandemic Crash when #Bitcoin rallied before the S&P500. Remember, ‘correlation’ should not be calculated by % gain or loss. We are strictly talking about market direction. Uptrend or Downtrend.”

The United States stock market has entered earnings season, following weeks of stagnancy. Historically, earnings season has been a net positive for stocks, acting as a short-term catalyst. This could place Bitcoin (BTC) in a unique position because it has rallied throughout October, despite the slump of U.S. stocks. If risk-on assets begin to see some upside momentum, there is a chance it could affect BTC positively.

If Bitcoin begins to show some correlation with the S&P 500 again, then the positive earnings season met with a strong performance by Big Tech could further fuel Bitcoin’s momentum. However, there is some evidence that supports the opposite.

Denis Vinokourov, head of research at crypto exchange and broker Bequant, told Cointelegraph that earnings typically buoy the U.S. stock market, but the latest earnings season might have a small effect on the overall market sentiment. He said that the Nov. 3 U.S. presidential election has become a more important macro factor, which could diminish the importance of earnings, adding:

“The markets are now half way through the third quarter and despite the global slowdown in the wake of the covid-19 pandemic, so far, 85 percent of companies have beat expectations by 19 percent on average, which is well above the historic average beat of between three to five percent. However, what markets tend to focus on is not just the headline earnings data but also guidance, which, given the limited visibility amid the aforementioned pandemic, has been rather muted.”

Vinokourov also emphasized that Bitcoin could pull back in the near term, noting that if Bitcoin rose in October due to the uncertainty around the election, then the post-election cycle could cause BTC to unwind. Since Oct. 1, Bitcoin has risen from $10,775 to over $13,300, peaking at $13,859 on Oct. 28.

A minor pullback or consolidation phase in the short term is also likely, given that $13,875 has acted as a multiyear resistance area since 2018. Vinokourov suggested that “If one goes by the narrative that uncertainty over the elections in the U.S. was one the main upside drivers, then, by default, the resolution should result in unwind and therefore some downside.”

Guy Hirsch, managing director of the U.S. region at trading platform eToro, told Cointelegraph that he does not see earnings season affecting Bitcoin in a major way. Hirsch noted that the U.S. stock market would not have a major impact on BTC:

“So far, earnings season has been a net positive for the markets, with a significant number of companies beating estimates and likely limiting the total downside risk for a mass sell-off, at least for the time being. That said, the correlation between Bitcoin and equities has largely broken down over recent weeks and I am unable to see how earnings might affect BTC in the near-future.”

Another metric that points toward a declining correlation between Bitcoin and U.S. stocks is the Bitcoin network-value-to-transactions, or NVT, price ratio. The NVT price calculates the value of Bitcoin based on its market price and the amount of BTC transferred on the blockchain on a daily basis. The NVT price of Bitcoin has also seen a drop in correlation with the S&P 500, as on-chain analyst Willy Woo reported.

A small pullback could occur, but momentum is too strong

Since achieving a peak of $13,859, the price of Bitcoin has fallen by around 4% in the past three days. The drop coincided with a decline in stablecoin inflows, which indicates lower buyer demand. In the same period, exchange inflows increased, demonstrating an intent to sell from retail investors and potentially high-net-worth individual investors.

Still, Hirsch emphasized that he does not believe a drop to $12,000 is likely, as the “upside momentum” of Bitcoin is simply too strong, with fundamentals backing it up. Bitcoin has seen unexpected price swings in the past, especially during bull markets. Volumes, open interest and overall trading activity increase, raising the probability for short-term volatility spikes. Yet, Hirsch said the current uptrend of Bitcoin is different from past cycles.

In the past month, PayPal integrated cryptocurrency buying and selling. That was followed by JPMorgan Chase’s comparison of Bitcoin with gold, and Avanti, a digital-asset-focused bank, receiving a banking charter. Given the rising institutional adoption of Bitcoin, high network hash rate and growing daily transaction value on the Bitcoin blockchain, Hirsch suggested a major pullback is unlikely in the near term, as “This rally is different than the 2017 ICO run up,” adding:

“Should COVID continue to surge and stimulus falter in the wake of a contested US election, it would make sense for Bitcoin adoption to continue increasing (thus, driving up prices) versus BTC being sold off.”

Technically, higher time frame charts of Bitcoin also portray a neutral market sentiment in the short term. The daily chart shows BTC has been hovering above the short-term 10-day moving average, despite the pullback from $13,876. As long as the price of Bitcoin remains stable above key support levels of $12,700 and $13,000, the overall technical uptrend of BTC remains intact.