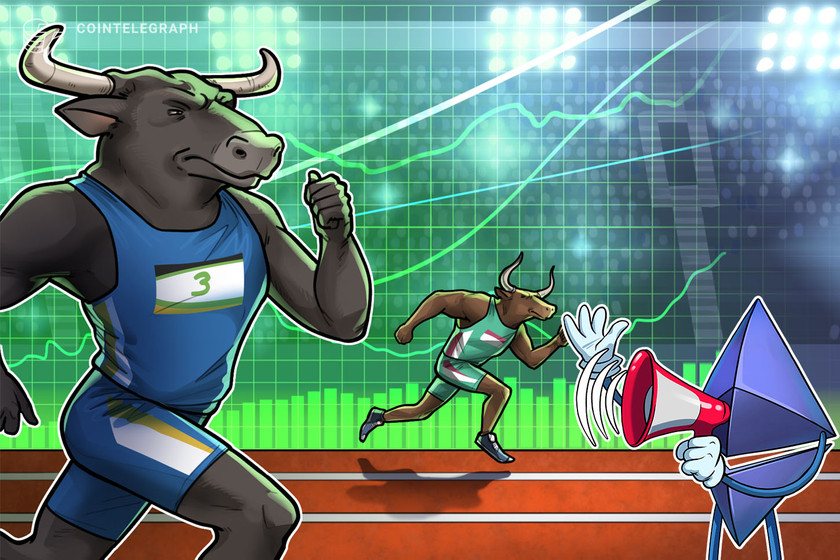 Numerous on-chain indicators suggest Ethereum price is on the verge of another 2017-style bull run.

Ether (ETH) price is currently ranging between $440 and $470, which is similar to the price action seen in December 2017. Back then, the scenario ended up being incredibly bullish, and the altcoin quickly rocketed toward $1,400.

Fast forward to 2020, and some investors believe a similar outcome may occur as a few key on-chain and technical indicators are mirroring the levels seen in the previous bull run.

On Dec. 10 Ether price was $450, and it took only 34 days for Ether to reach its all-time high. Before this price explosion, the altcoin traded sideways for over two weeks. If something similar were to happen, on-chain metrics and historical data suggest it could happen over the next ten days.

Take notice of how the recent price movements raised investors’ hope that the next crypto-bull market will mirror the one seen in late-2017. Although the price is an important metric, it does not provide granularity for network usage and volume.

To assess the size and amount of daily transactions, Coinmetrics provides adjusted transactions and transfers data.

The above chart shows $1.9 billion of the most recent transfers and transactions, a 46% increase from the previous month. Although Ether’s price increase undoubtedly helped, the same effect happened in late-2017.

The daily average notional transacted and transferred on the Ethereum network in November 2017 stood at $830 million. This all changed by the end of the month, as the indicator broke the $2 billion mark. This same indicator has strong ties to the current scenario.

November data seems to be repeating the previous month’s peak at 550,000 daily active addresses. This time around, activity appears to be at a much higher level than the late-2017 era.

Of course, one might need to adjust to the growing use of decentralized finance (DeFi) and stablecoins. Yield pools and decentralized exchanges are responsible for tens of thousands of daily transactions involving multiple addresses.

As one should expect, the number of daily active addresses back in November 2017 stood at 200,000, significatively below the current number. Nevertheless, they managed to catch up to 500,000 network addresses per day by the end of the year.

On-chain analytics might have been close enough to the current state, but price action relies heavily on volume. After all, trading activity doesn’t necessarily hold a direct relation to the network use.

The current $1.3 billion in daily average volume represents a 50% increase from the previous month. This data is a remarkable fact as it does not include decentralized exchanges.

Oddly enough, the current Ether volume stands out at the same level seen in Dec. 2017. Therefore one might conclude that this is too much of a coincidence to be disregarded.

The current daily active addresses, transactions/transfers notional, and traded volume are aligned with the 2017 year-end period when Ether traded near the $450 mark.

For this reason, analysts have solid reasons to believe that a $1,400 bull run is within the realm of possibility within the next few weeks.

Will a renewed decentralized finance (DeFi) frenzy be enough to generate an inflow similar to the one seen during the 2017 ICO era? Or will it be institutional and larger-sized investors who sustain a powerful 300% rally?

Remember, as the saying goes, ‘history doesn’t repeat, but it often rhymes.’