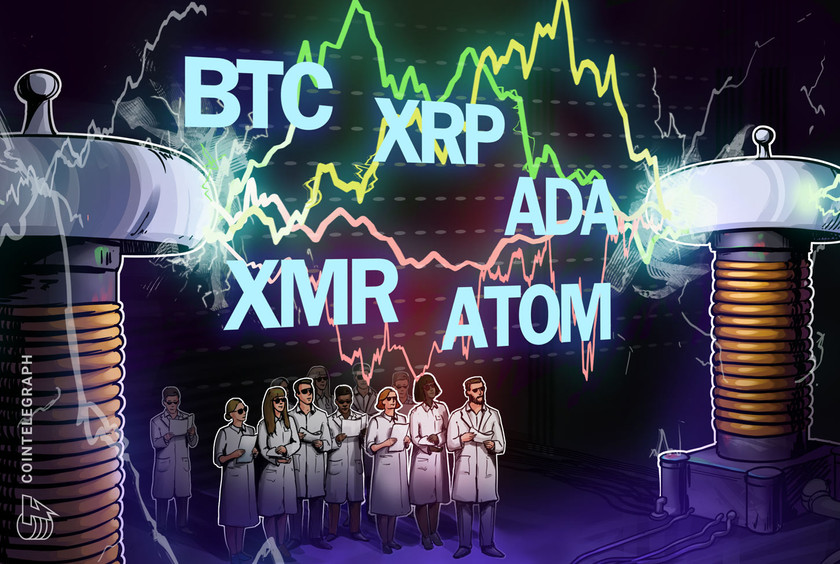 Bitcoin price could achieve a new 2020 high if bulls hold the price above the key multi-year resistance at $11.5K.

In the past three years the U.S. Securities and Exchange Commission has shot down several applications for a Bitcoin (BTC) exchange-traded fund. This dashed hopes of many investors who believed Bitcoin price would rally higher if an EFT was approved.

Although investors no longer pin BTC’s future on the existence of an ETF, regulators could eventually adjust their anti-crypto stance in the future.

In an interview with Cointelegraph, SEC Commissioner Hester Peirce said that the regulator will have to become accommodative to innovation as several people from both the crypto space and traditional financial institutions seek their guidance.

Bloomberg’s latest crypto newsletter predicts that a Bitcoin ETF could see the light of the day if Democratic presidential nominee Joe Biden is elected as the next U.S. President. The author believes that a change in guard may bring regulatory clarity that could attract investments into digital assets.

However, even if President Donald Trump is re-elected, Bloomberg expects Bitcoin to extend its uptrend through his second term as the digital asset will be buoyed by the rising debt-to-GDP, quantitative easing, and Bitcoin hash rate.

The long-term forecasts are encouraging and so are the short-term charts. Let’s analyze the top-5 cryptocurrencies that may outperform in the short-term.

The breakout of the symmetrical triangle on Oct. 8 attracted buyers who pushed the price above the overhead resistance at $11,178 on Oct. 10. However, the bears have not yet given up completely as they sold the rally to $11,482.44 on Sep. 10. 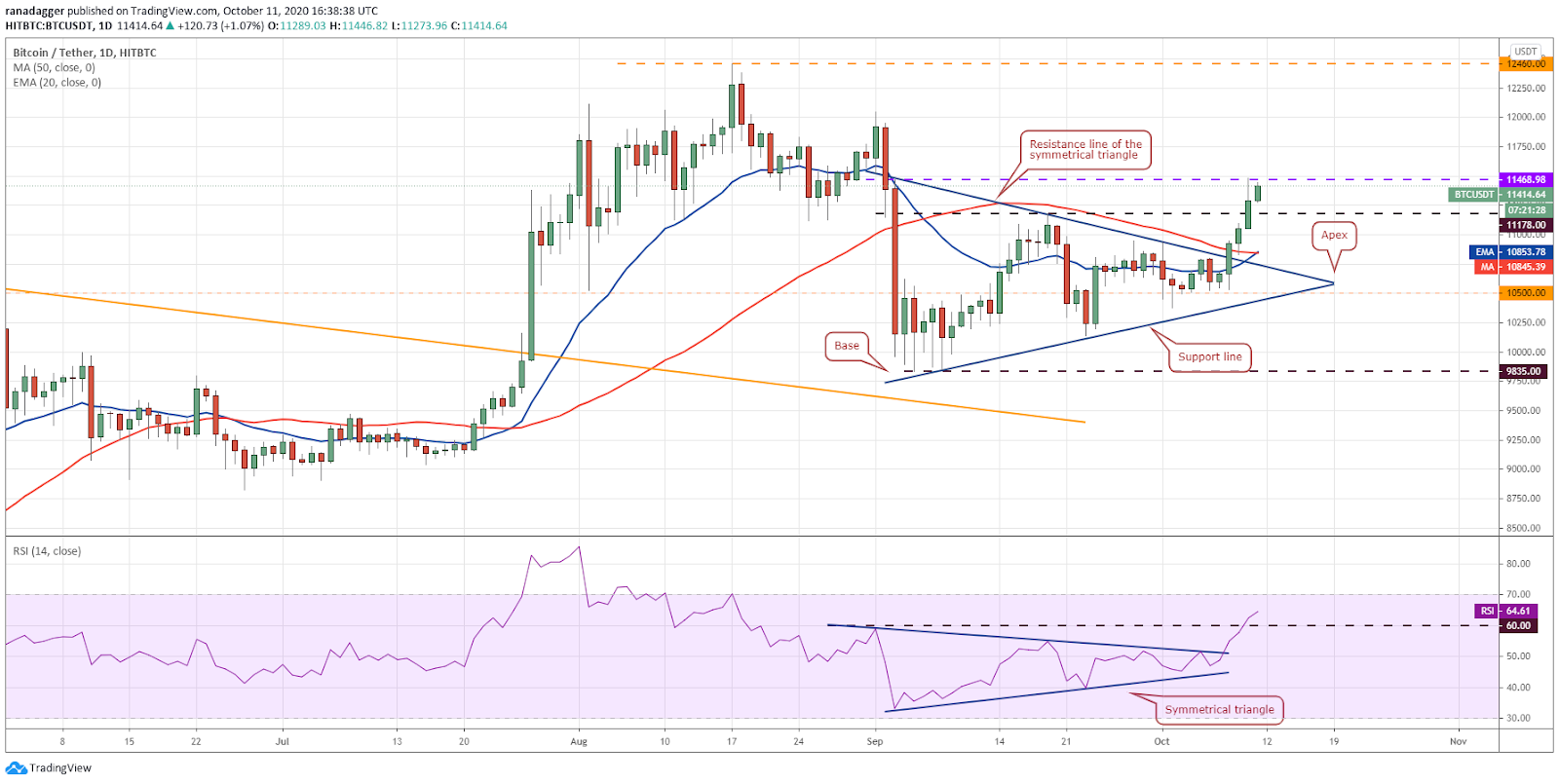 The bulls used the dip to buy and did not allow the price to break below $11,178. This suggests that the sentiment has changed from sell on rallies to buy on dips.

The moving averages on the verge of a bullish crossover and the relative strength index above 64 indicate that the advantage is currently with the bulls.

This bullish view will be invalidated if the pair turns down from the current levels and breaks below the 20-day exponential moving average ($10,853). Such a move will suggest that the current breakout was a bull trap. 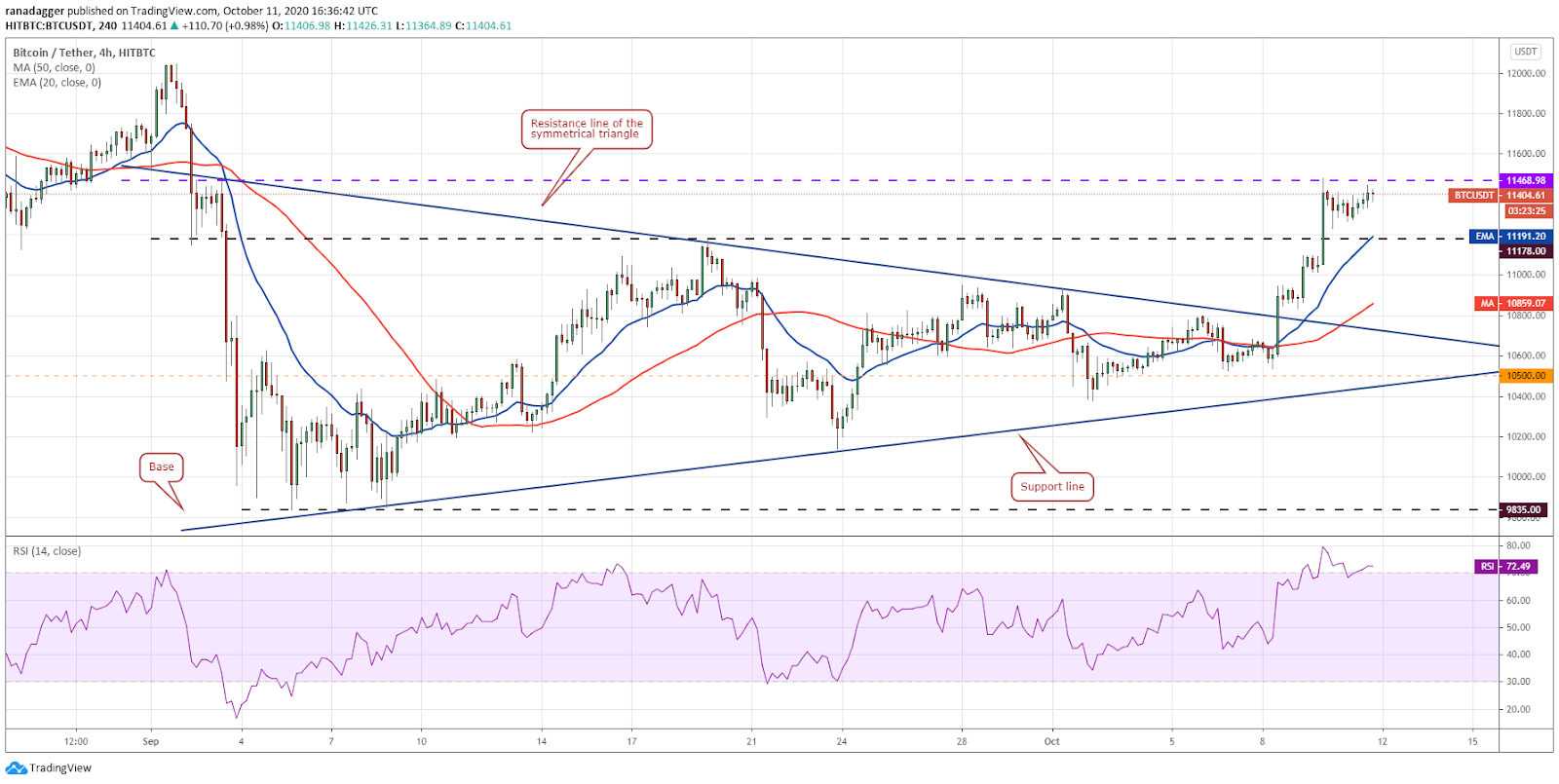 The trend on the 4-hour chart has turned bullish with both moving averages sloping up and the RSI in the overbought territory. The buyers will again attempt to push the price above $11,500 and if they succeed momentum is likely to pick up.

The bears defended the $0.26 overhead resistance on Oct. 10, but they could not sustain the selling pressure today. This shows that the bulls are buying on every minor dip and are currently attempting to push XRP above $0.26. 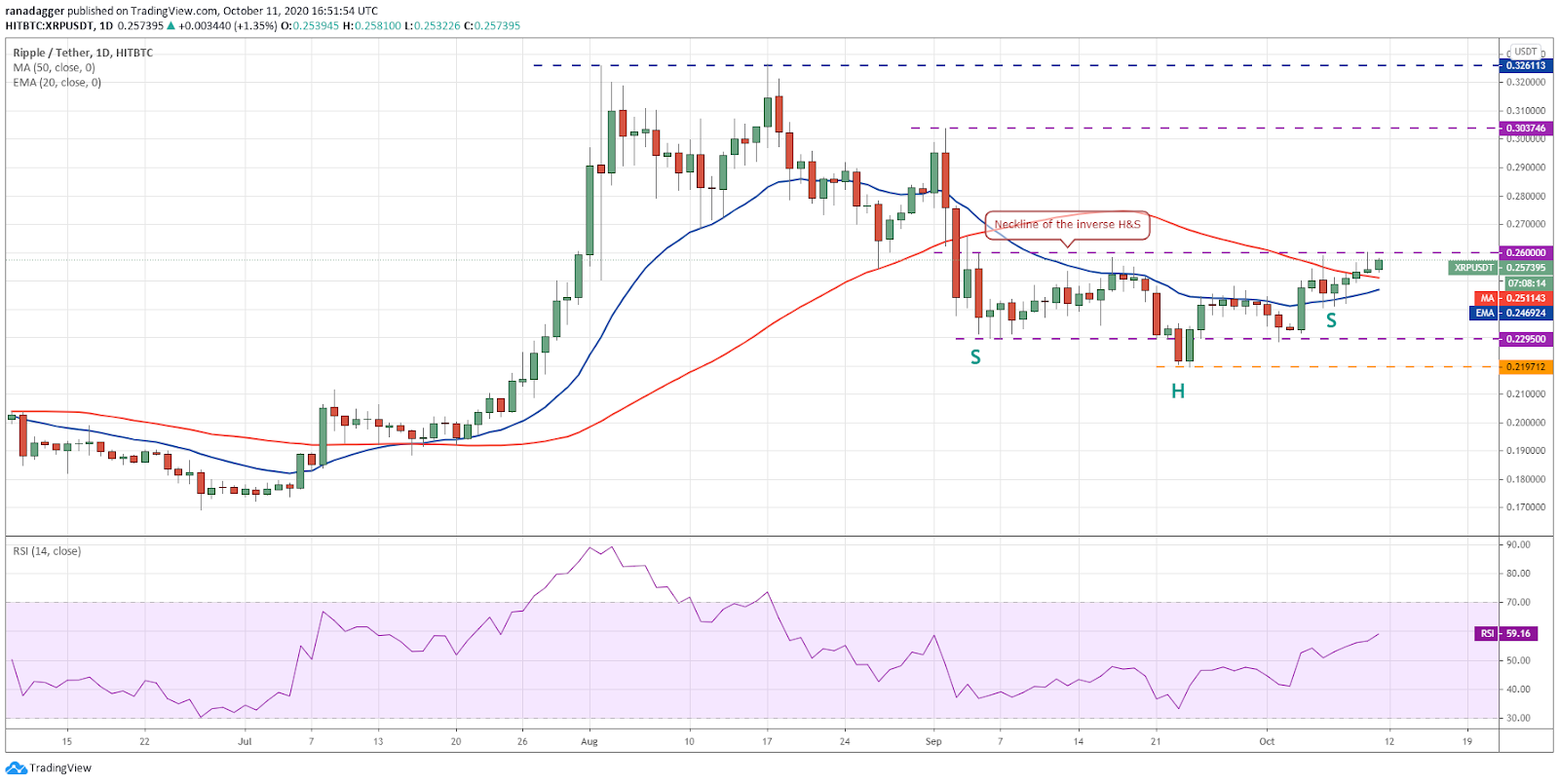 A breakout and close (UTC time) above $0.26 will complete an inverse head and shoulders setup that has a pattern target of $0.300288. The moving averages on the verge of a bullish crossover and the RSI close to 60 suggest advantage to the bulls.

Contrary to this assumption, if the XRP/USD pair turns down from the current levels and breaks below the 20-day EMA ($0.246), it will show that the bears are aggressively shorting on rallies to $0.26. 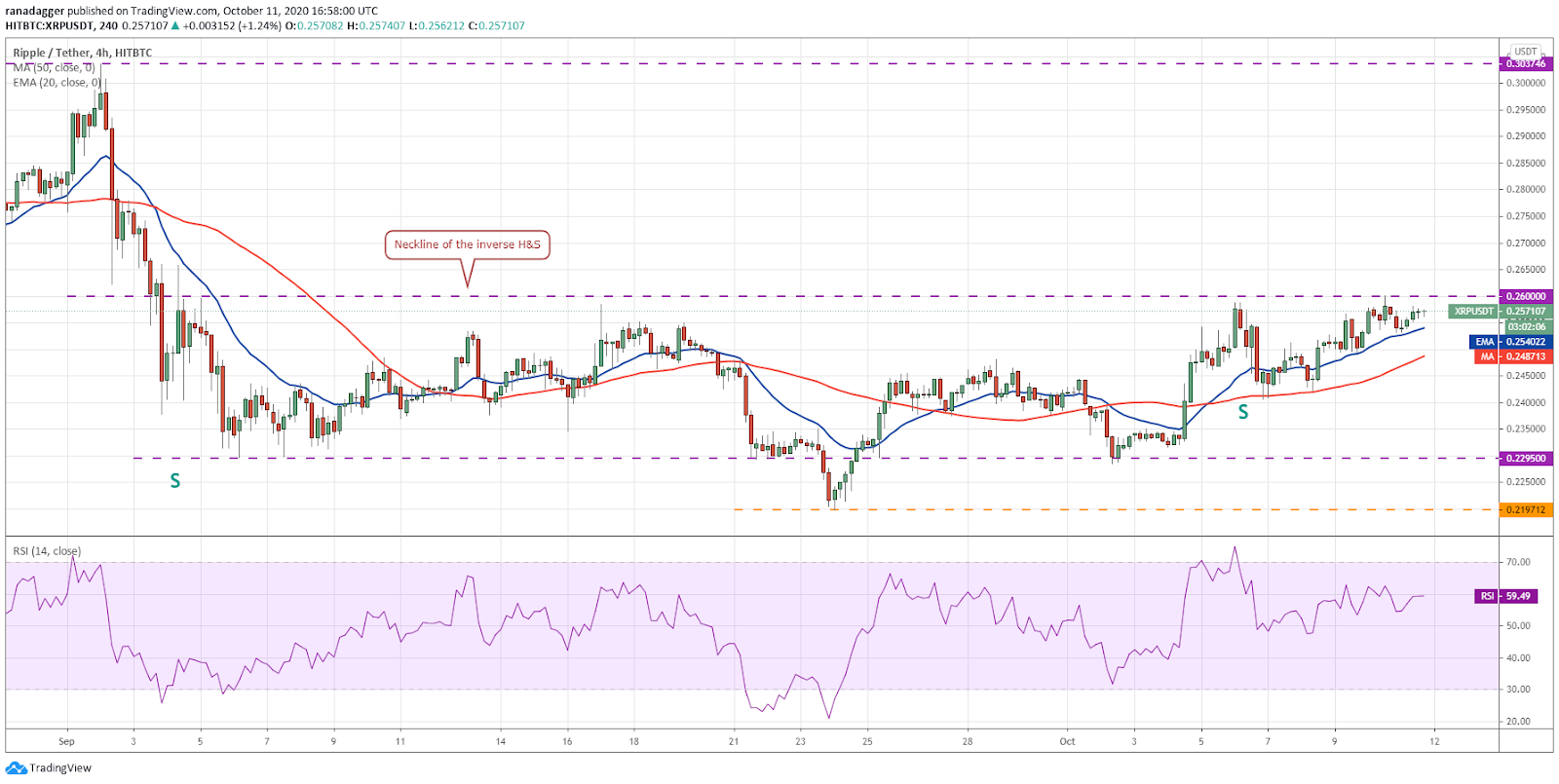 The bears are attempting to defend the $0.26 resistance but they have not been able to sink the price below the 20-EMA. This suggests that the bulls are accumulating on dips.

The upsloping moving averages and the RSI near 60 suggest that bulls have the upper hand in the short-term.

A break below the 20-EMA will be the first sign of weakness and the advantage will turn in favor of the bears if they can sink the price below the $0.24 support.

Conversely, if the bulls can push the price above $0.26, a new uptrend is likely. The pair could face resistance at $0.266 and then at $0.28 but the trend will remain bullish as long as the price remains above the neckline.

The failure of the bears to sustain Cardano (ADA) below $0.90, between Oct. 7 to 9, attracted aggressive buying by the bulls who then pushed the price above the moving averages. 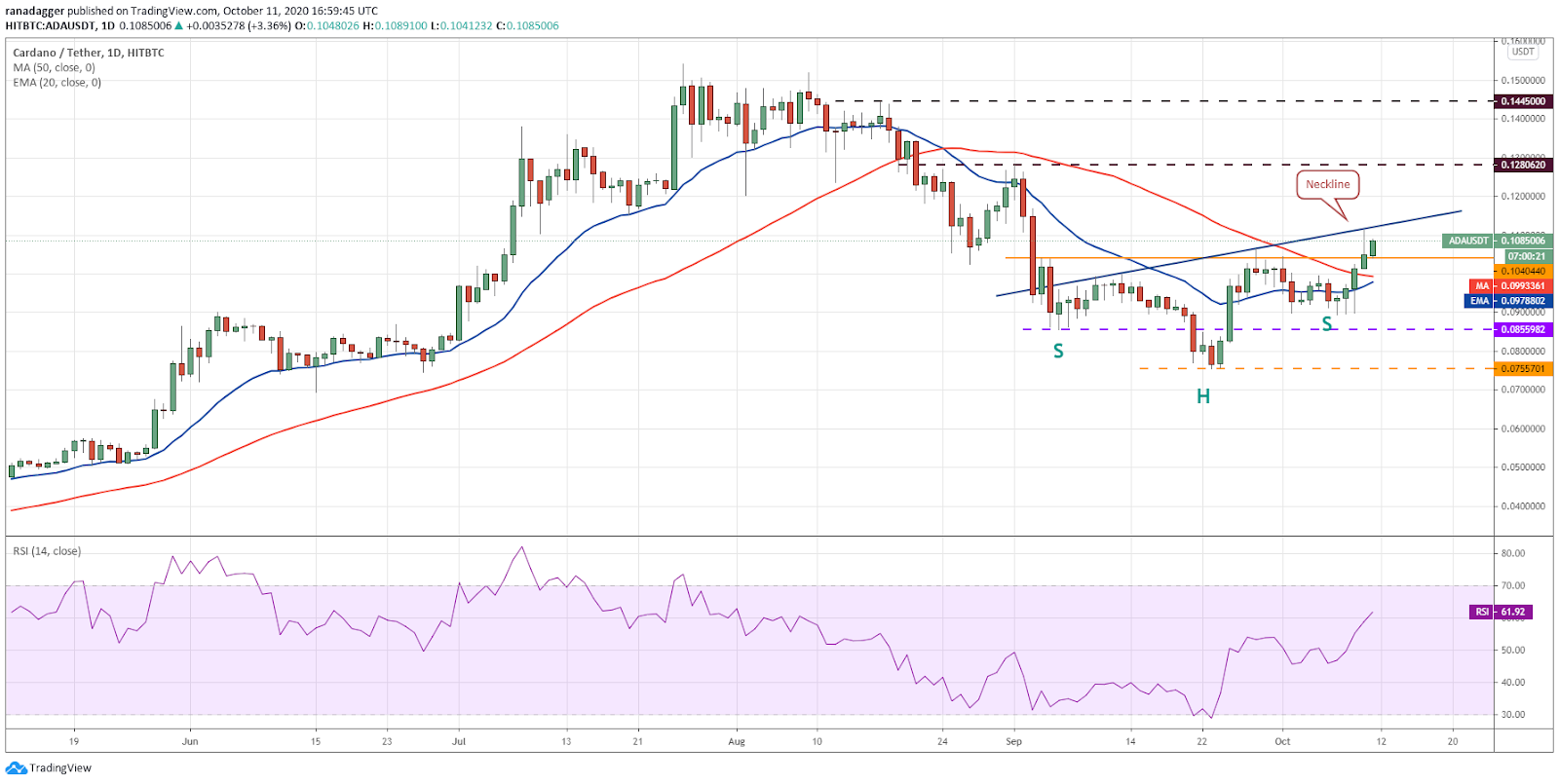 The moving averages on the verge of a bullish crossover and the RSI near 62 suggest that the buyers have the upper hand. If they can propel the price above the neckline, it will complete a reversal setup that has a pattern target of $0.1331.

This bullish view will be invalidated if the ADA/USD pair turns down from the current levels and breaks below the moving averages. Such a move will suggest that the breakout above $0.104044 was a bull trap. 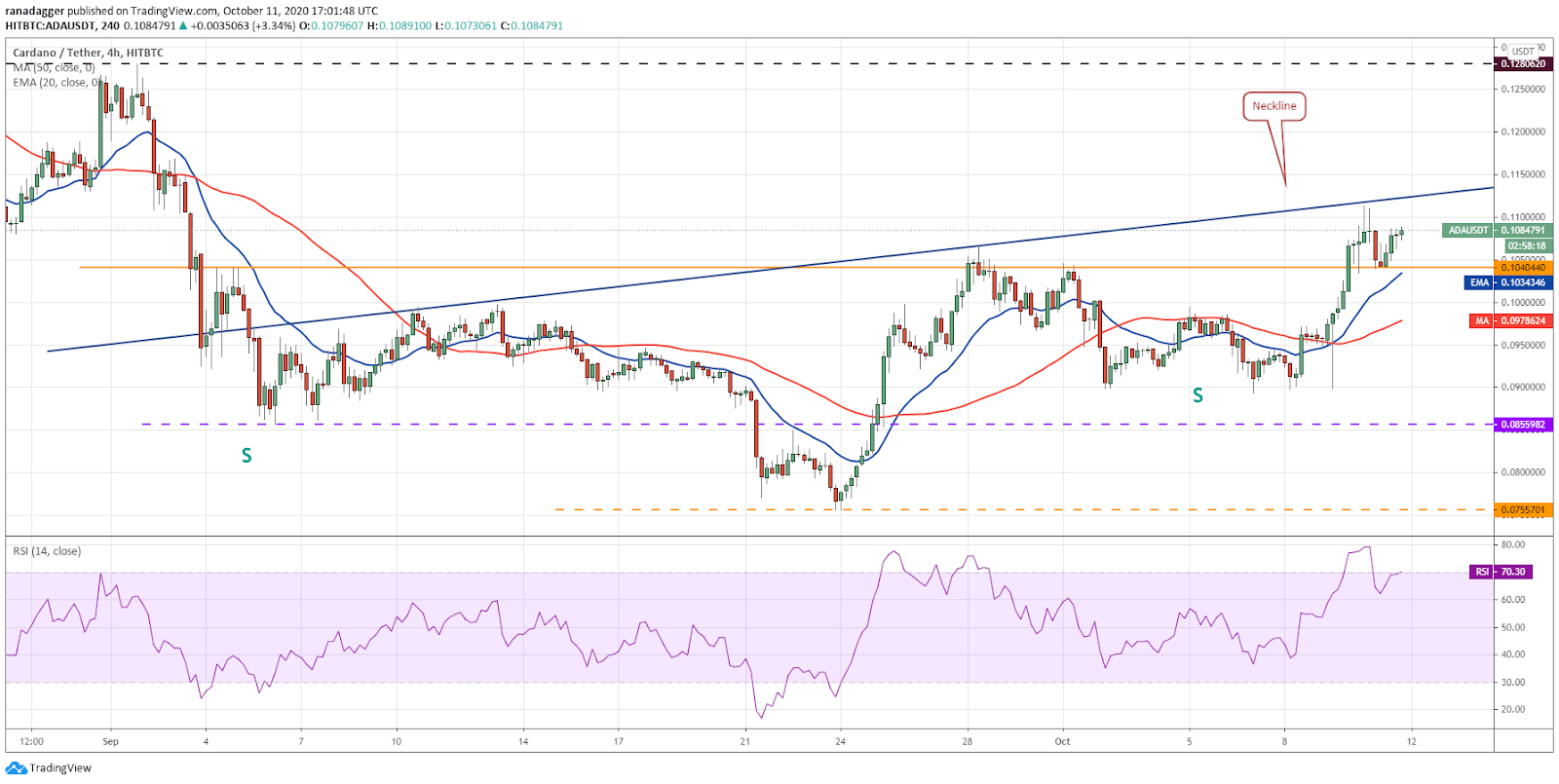 The rebound off the immediate support at $0.1040440 suggests that the sentiment has turned positive as the bulls are viewing dips as a buying opportunity.

However, unless the bulls drive the price above the neckline, the bears will again try to sink the pair back below $0.1040440 and the 20-EMA. If they succeed, the pair could drop to the 50-simple moving average and below it to $0.90.

Conversely, if the pair rebounds off the 20-EMA, it will indicate strength and increase the possibility of a break above the neckline.

Monero (XMR) is in an uptrend with both moving averages sloping up and the RSI in the overbought zone. The bulls will now try to extend the up-move to $140 and above it to $150. 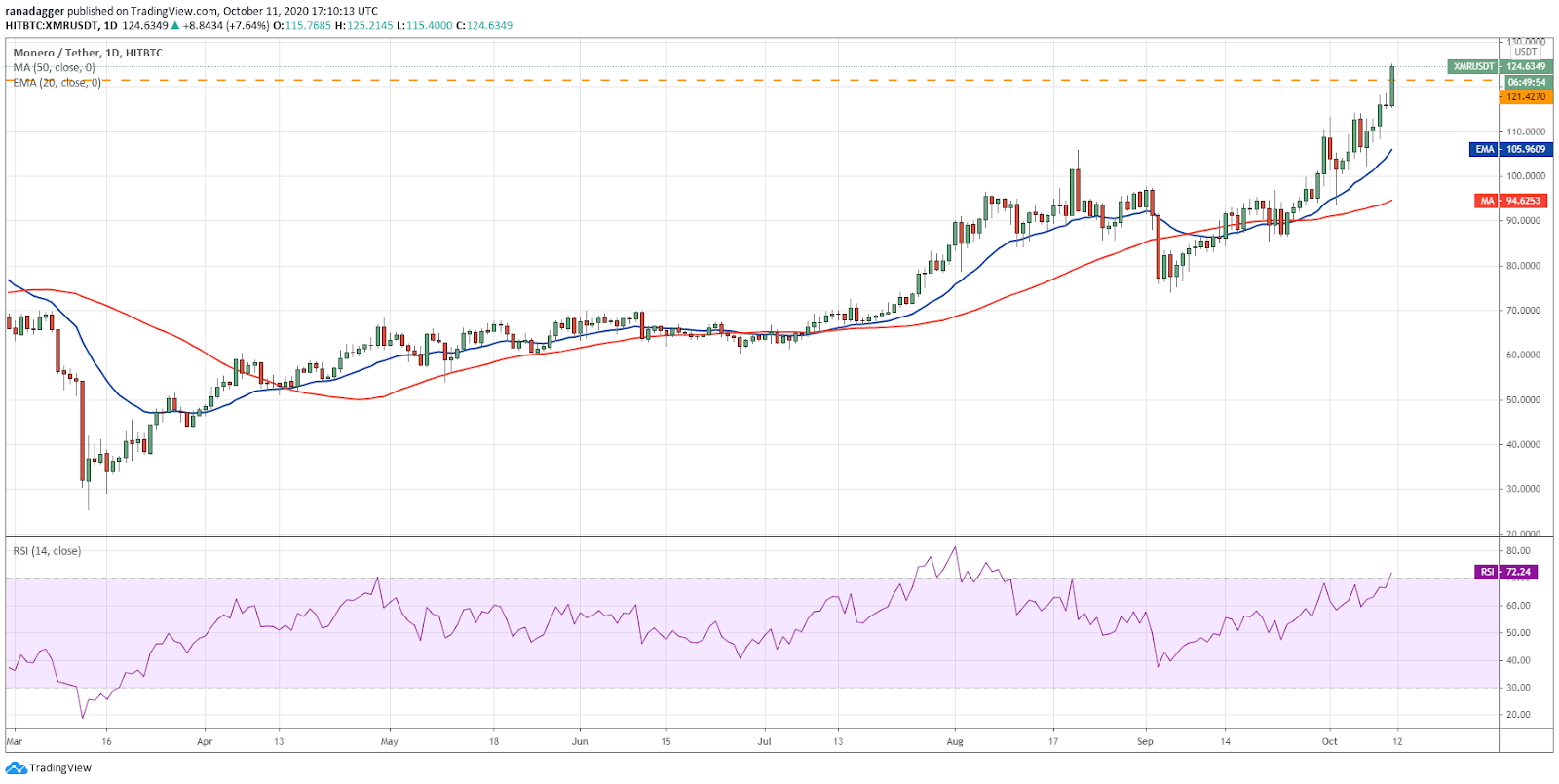 In a strong uptrend, the corrections usually last for one to three days and the bulls view the dips to the 20-day EMA ($105.96) as a buying opportunity because it gives a low-risk entry point with a good risk to reward ratio.

However, if the XMR/USD pair turns down from the current levels and drops back below $121.427, the bears will try to drag the price to the 20-day EMA. A break below this support will be the first sign of weakness. 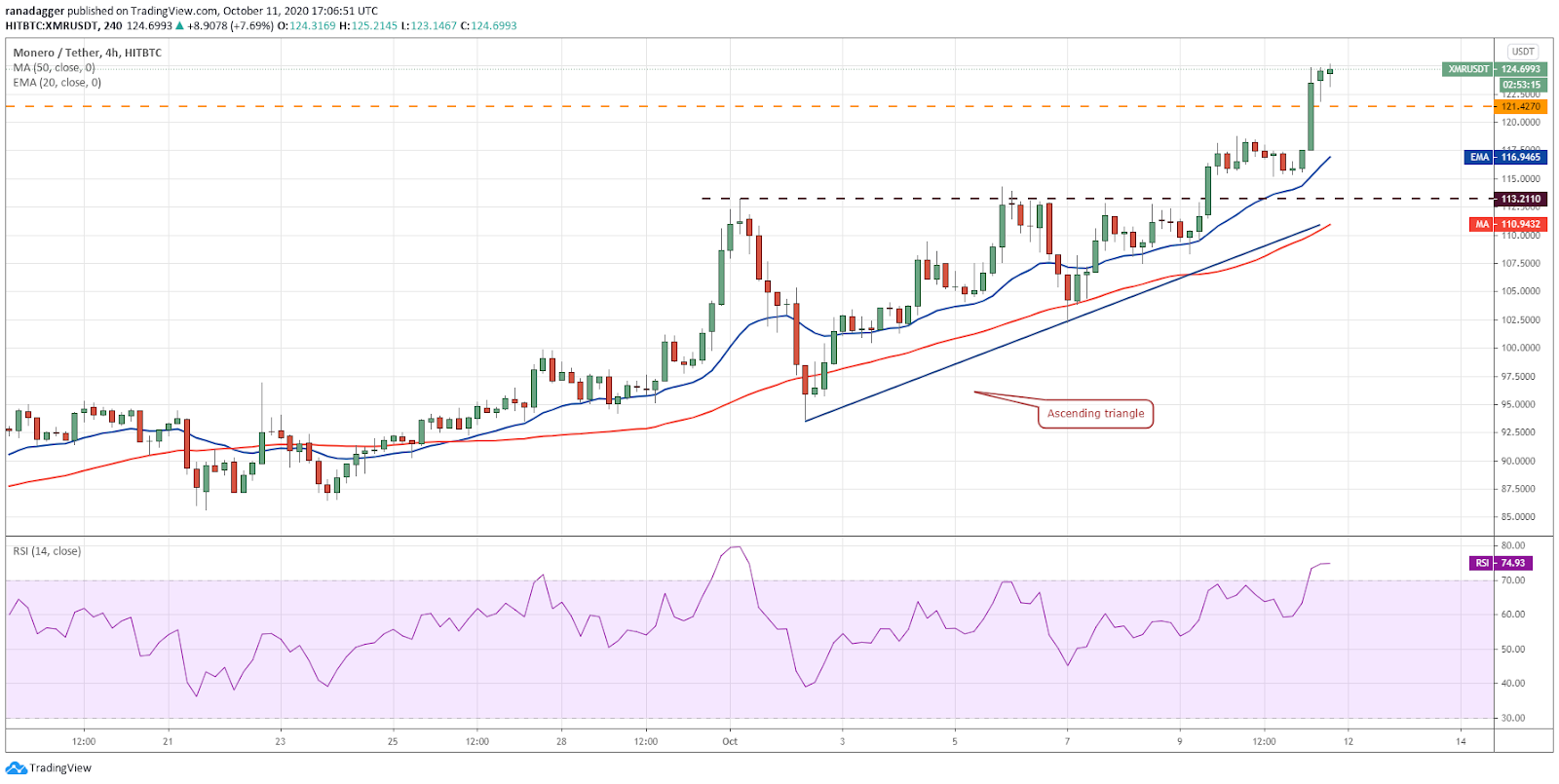 The ascending triangle pattern completed on a breakout and close (UTC time) above $113.211. This bullish setup has a pattern target of $132.739. The buyers are currently attempting to sustain the price above $121.427.

If they succeed, it will suggest that $121.427 will now act as a strong support. Even if the price dips back below this level, the bulls will again try to buy the dip to the 20-EMA.

If the pair rebounds off this support, it will indicate strength and increase the possibility of a resumption of the uptrend.

Cosmos (ATOM) broke out and closed (UTC time) above the neckline of the inverse head and shoulders pattern on Oct. 10. This breakout has seen further buying today and the bulls have pushed the price above the $5.877 resistance. 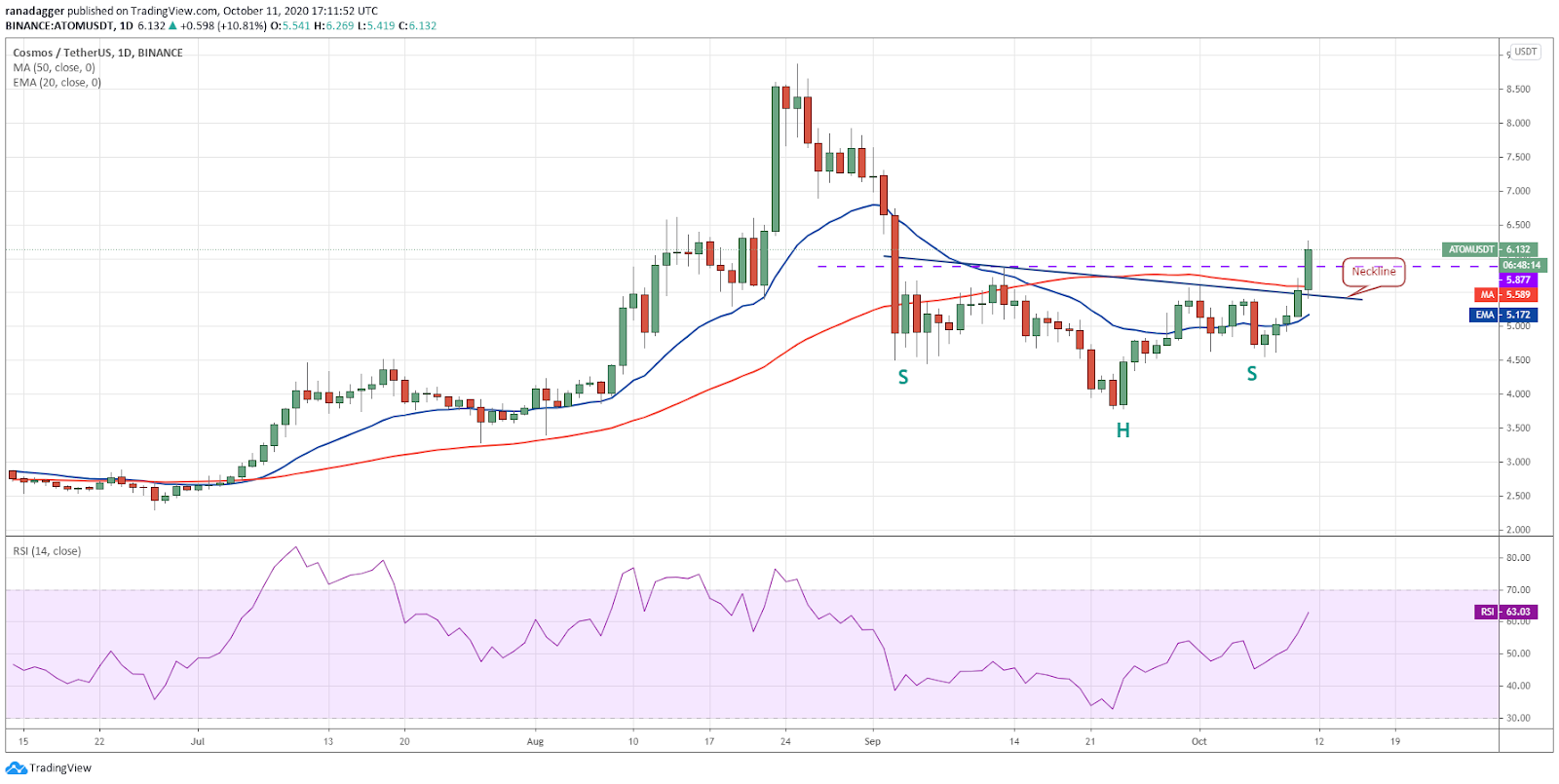 The ATOM/USD pair could now start a rally that may reach $7.40 and then $8.877. The 20-day EMA ($5.17) has started to turn up and the RSI has risen into the positive territory, which suggests a possible change in trend.

Contrary to this assumption, if the pair turns down from the current levels, the bears will try to sink the price back below the neckline and the 20-day EMA.

If that happens, it will indicate that the current breakout was a fake one. The trend will turn in favor of the bears if the pair drops below the right shoulder at $4.549. 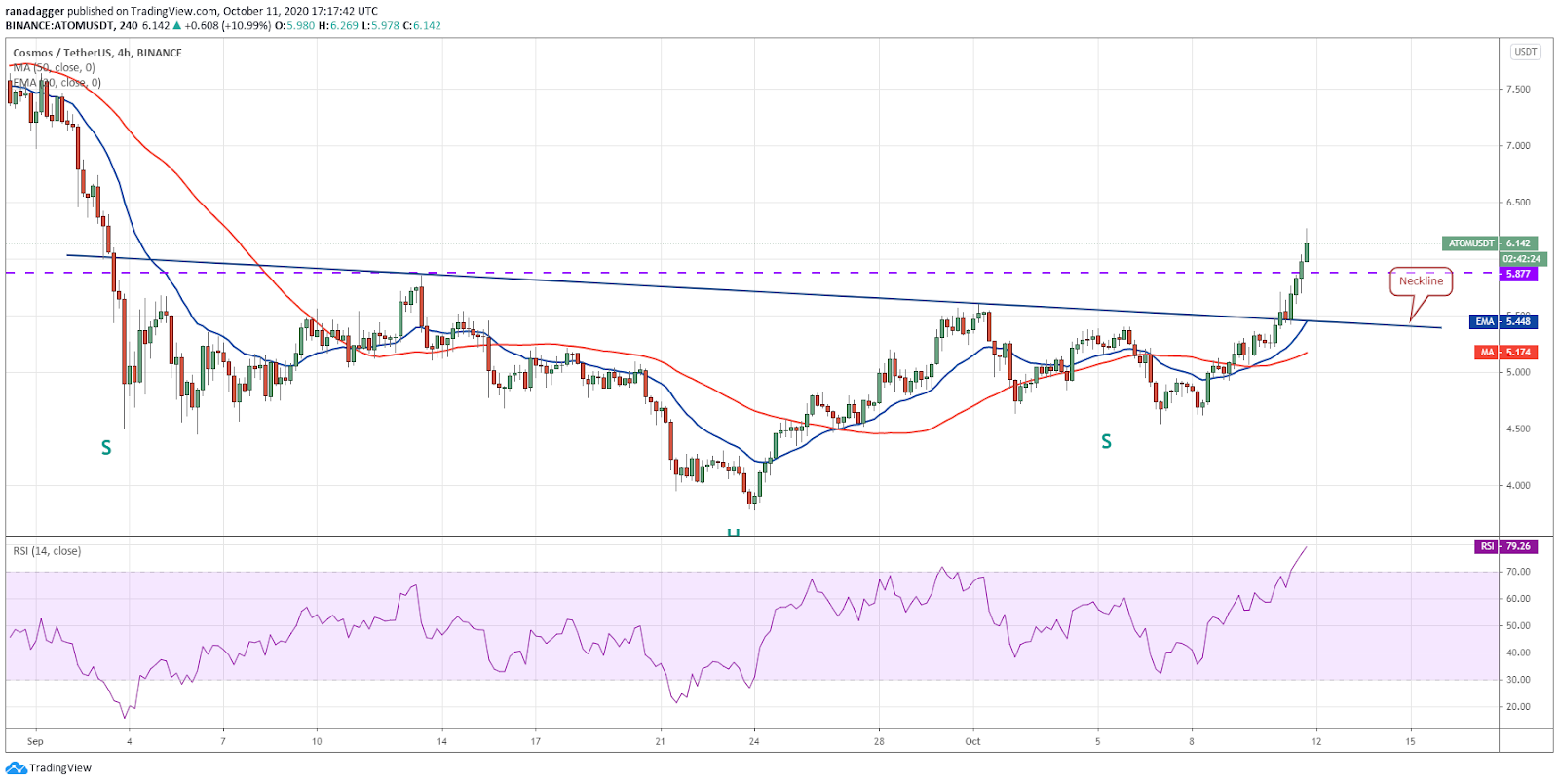 The bulls have pushed the price above the overhead resistance at $5.877 that could start a new uptrend. The upsloping moving averages and the RSI is in the positive territory suggest advantage to the bulls.

This positive view will be invalidated if the bulls fail to defend the breakout level during the next retest. If the price becomes pinned below the neckline this will be a sign of weakness.