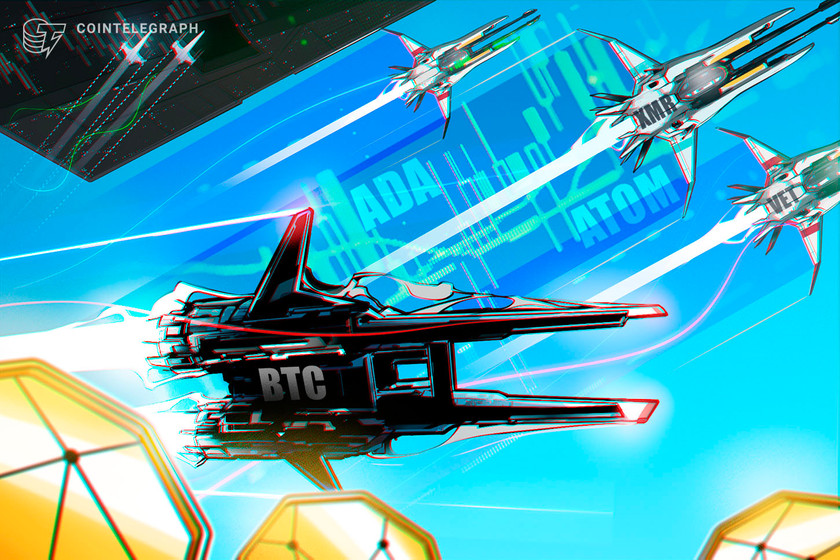 Bitcoin could consolidate for a few more days but select altcoins have formed reversal patterns that may lead to a trending move.

Investors are concerned about the stability of the cryptocurrency market after it was faced with a flurry of adverse news in the past few days.

Fortunately, the markets have matured to the extent that negative news no longer provokes wild price swings like they once did in crypto’s early days.

The current stability shows that institutional investors do not consider the recent KuCoin hack, CFTC and DOJ charges against BitMEX, or even President Donald Trump being diagnosed with coronavirus as serious enough events to crash the crypto markets.

Therefore, there was no panic liquidation in Bitcoin (BTC) futures after the news broke and the open interest remained stable.

In a bullish trend, traders use price weakness caused by knee-jerk reactions to add to their positions. If Bitcoin continues to sustain above the psychologically critical level at $10,000, more investors may consider adding to their portfolios.

Despite Bitcoin’s sideways price action, a few altcoins have maintained their uptrend and others are showing signs of a possible bullish trend reversal.

Let’s analyze the charts of the top 5 cryptocurrencies to see which critical levels may signal the start of a trending move.

The long-term trend in Bitcoin is bullish as the 200-day simple moving average ($9,448) is sloping up. However, in the short-term, the flat 20-day exponential moving average ($10,682) and the relative strength index close to the midpoint suggests a balance between supply and demand. 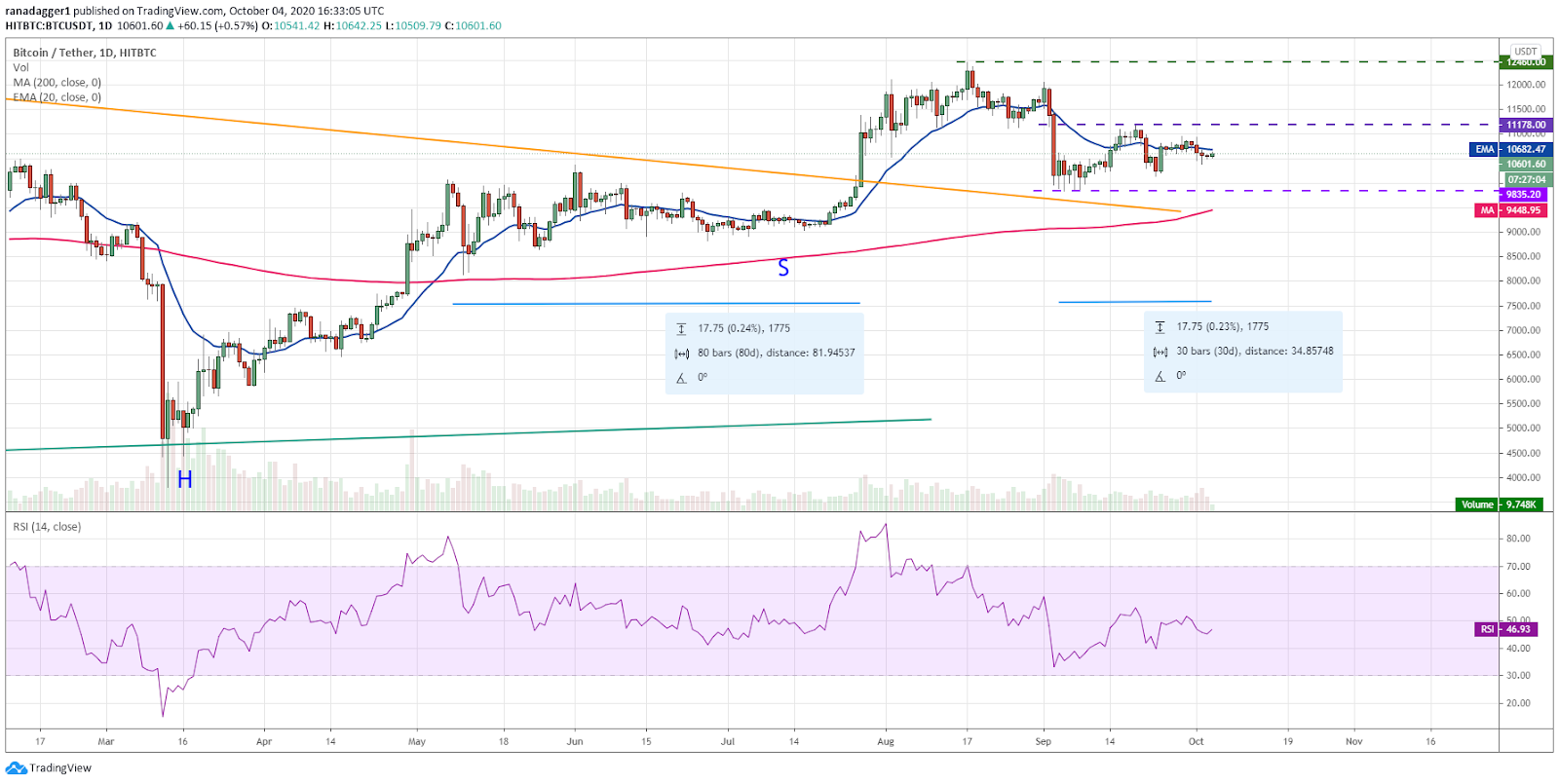 The BTC/USD pair is currently stuck between $9,835 and $11,178 for the past few days. A break above or below this range could start a trending move.

Between May and July, the pair had remained stuck in a tight range for almost 80 days and the current consolidation has completed about 30 days.

If history were to repeat itself, then the price may remain range-bound for a few more days. Hence, traders should be patient until the price breaks above or below the range.

A breakout of $11,178 could start a rally with the first target objective at $12,460, while a break below $9,835 and the 200-day SMA may intensify selling as traders rush to the exit to dump their positions. 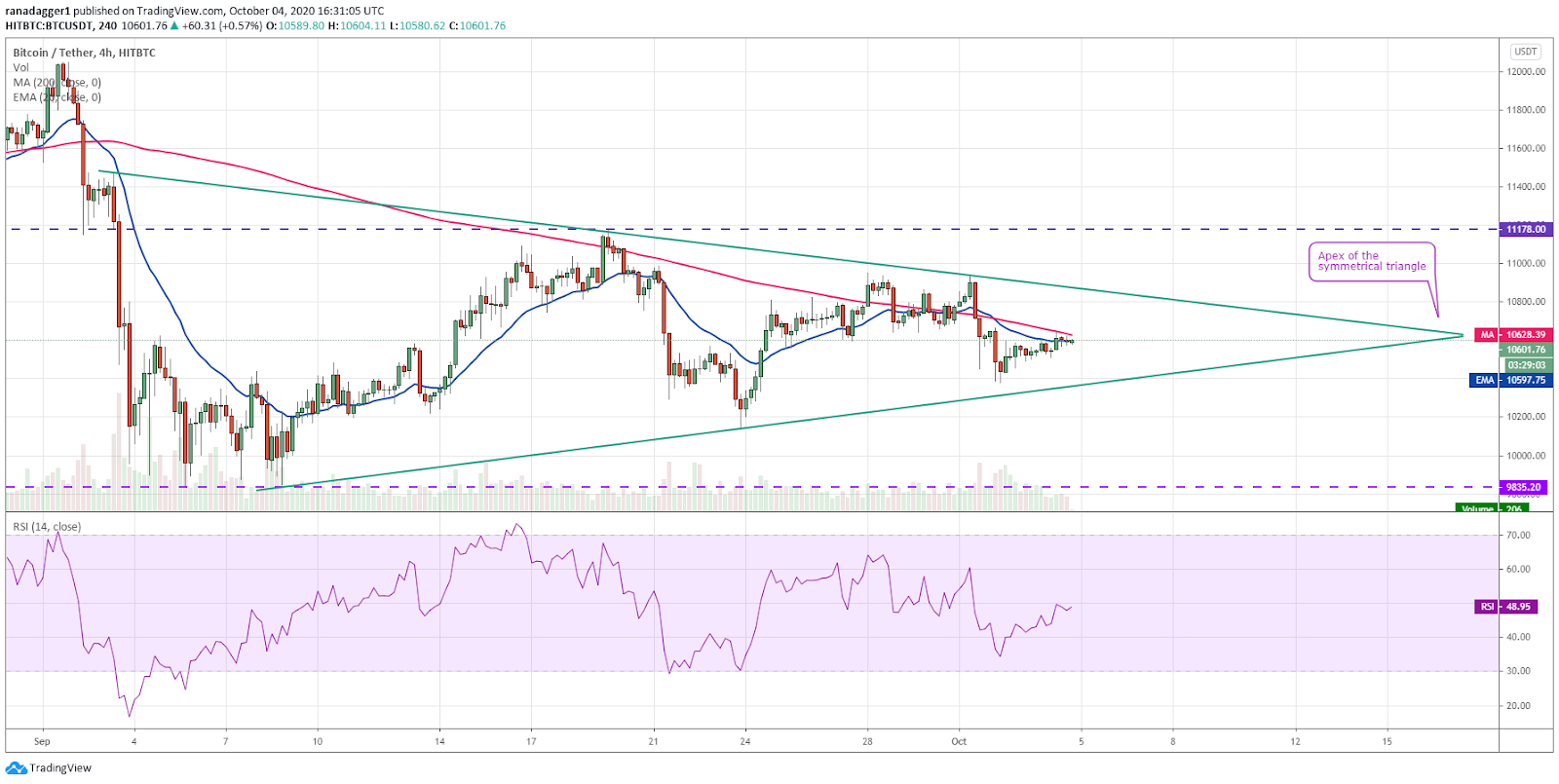 The 4-hour chart shows that the price is trading inside a large symmetrical triangle. A breakout between half to three-fourths of the distance from the base of the triangle to the apex is considered as reliable.

Therefore, the bulls and the bears might attempt a breakout of the triangle within the next few days. However, if that does not happen and the price reaches the apex of the triangle, then the pattern will be invalidated.

Cardano (ADA) closed (UTC time) below the 200-day SMA ($0.0837) on Sep. 23 but the bears could not sustain the lower levels, and the altcoin climbed back above the long-term moving average on Sep. 24. 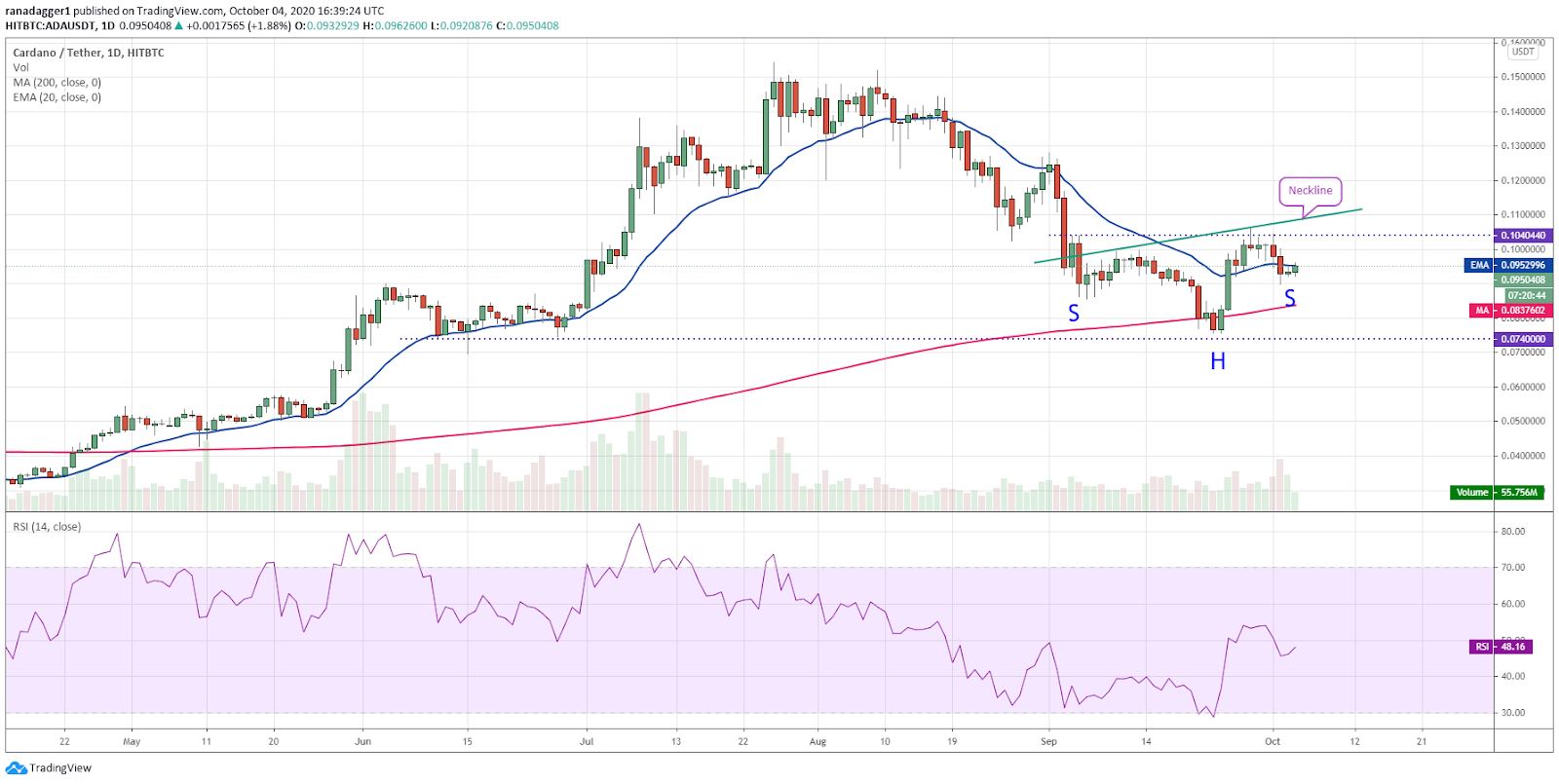 This suggests that the bulls are aggressively defending the 200-day SMA. The price action of the past few days is showing a possible inverse head and shoulders pattern formation that will complete on a breakout and close (UTC time) above the neckline.

The pattern target of this setup is $0.1331. This bullish view will come into play only after the price breaks out of the neckline.

Contrary to this assumption, if the ADA/USD pair turns down from the current level or the neckline and drops below the 200-day SMA, it will invalidate the pattern. This could attract aggressive selling with the next support at $0.050. 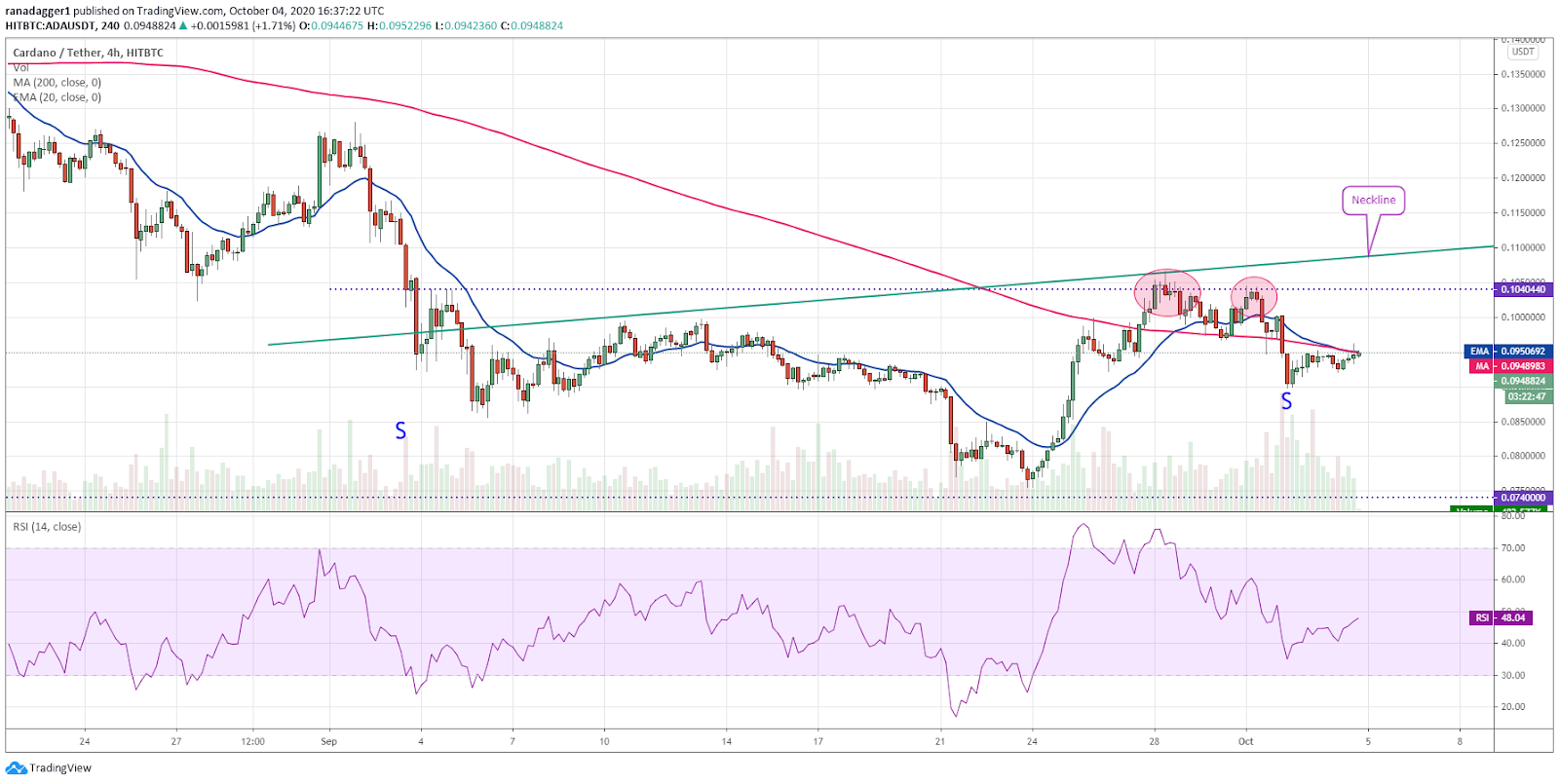 The downsloping moving averages and the RSI in negative territory suggest that bears have a slight advantage in the short-term. If the price dips below $0.0898, the bears will try to sink the price to the critical support at $0.074.

Conversely, if the bulls can push and sustain the price above the moving averages, a move to $0.1040440 and then to the neckline is possible.

Monero (XMR) broke above the $97.70 overhead resistance on Sep. 29 and the retest of the breakout level was successful on Oct. 2. This shows that the level that was previously acting as a stiff resistance is now acting as a strong support. 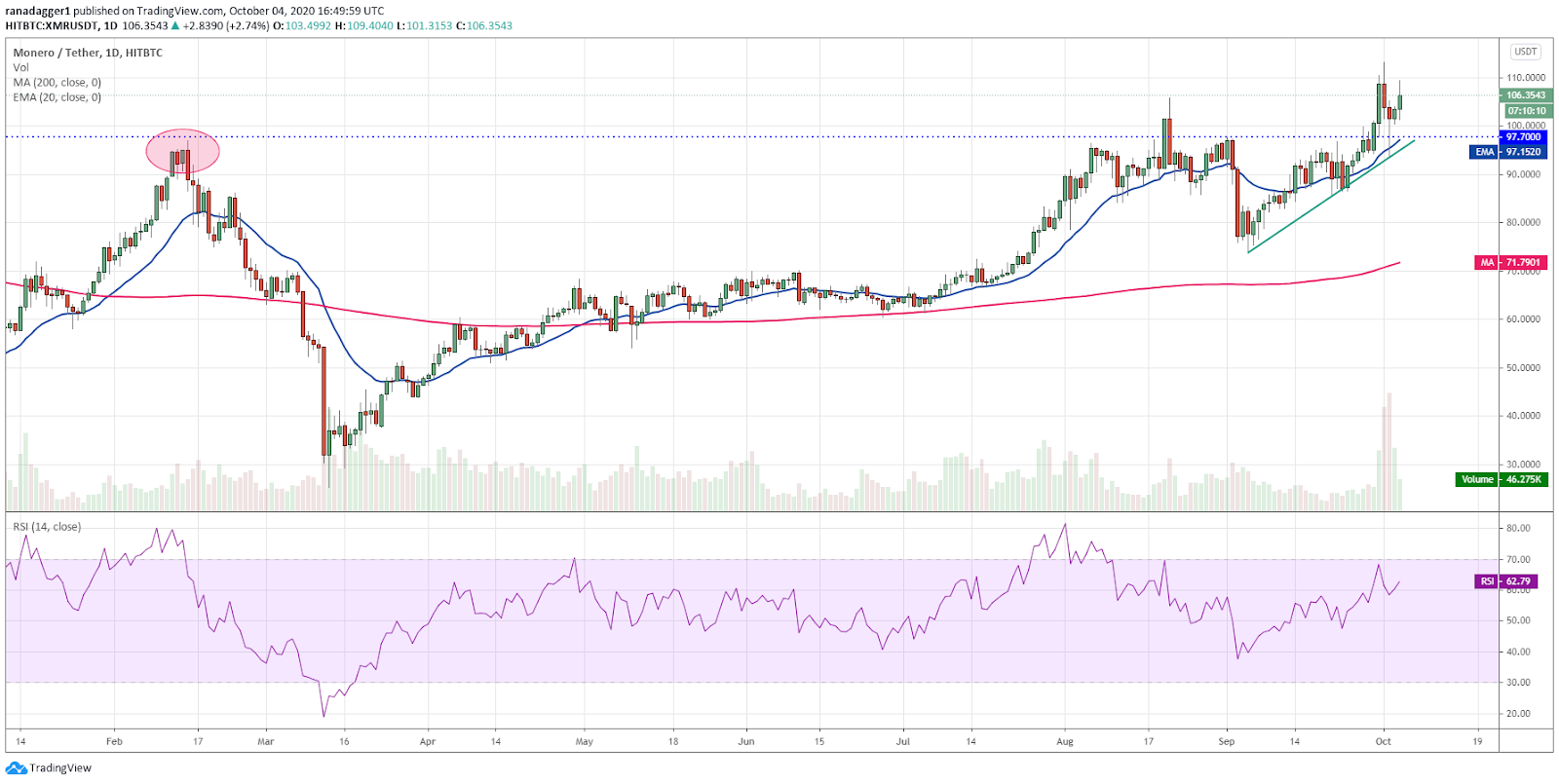 Momentum is likely to pick up if the bulls can push the price above this level and the next target is at $140.

This positive view will be invalidated if the XMR/USD pair turns down from the current levels and breaks below $93. Such a move could pull down the price to the 200-day SMA at $71.79. 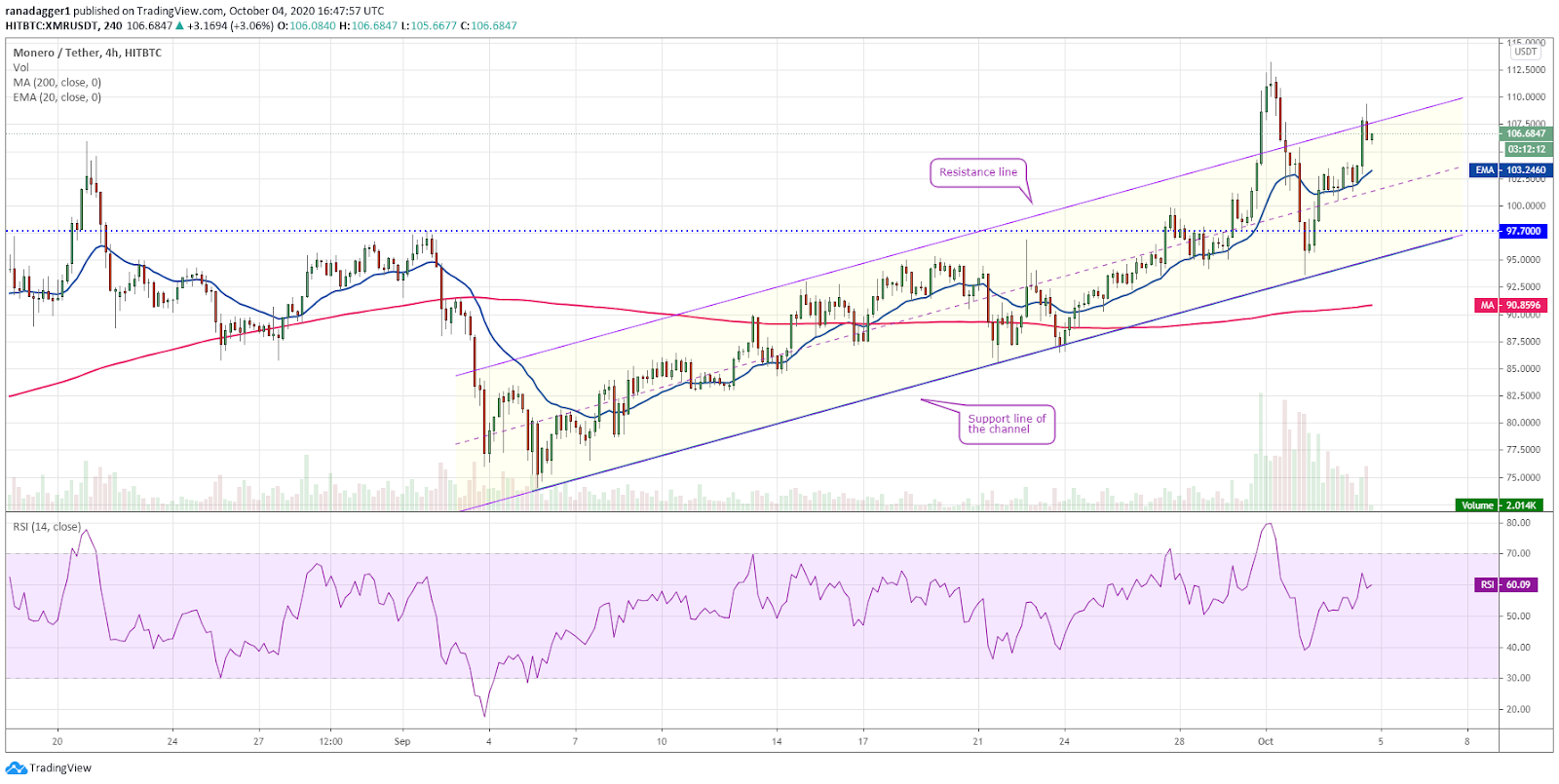 The 4-hour chart shows that the pair has largely been trading inside a channel for the past few days. Although the price broke above the channel, the bulls could not sustain the higher levels and the pair dropped to the support line of the channel.

However, the rebound from the support line has been strong and the bulls are once again trying to push the price above the channel. If they succeed, the momentum could pick up.

Contrary to this assumption, if the price fails to breakout of the channel, then a gradual up-move is likely. The first sign of weakness will be a break below the channel.

Cosmos (ATOM) is showing signs of a possible reversal as it has formed an inverse head and shoulders pattern that will complete on a breakout and close (UTC time) above the neckline. 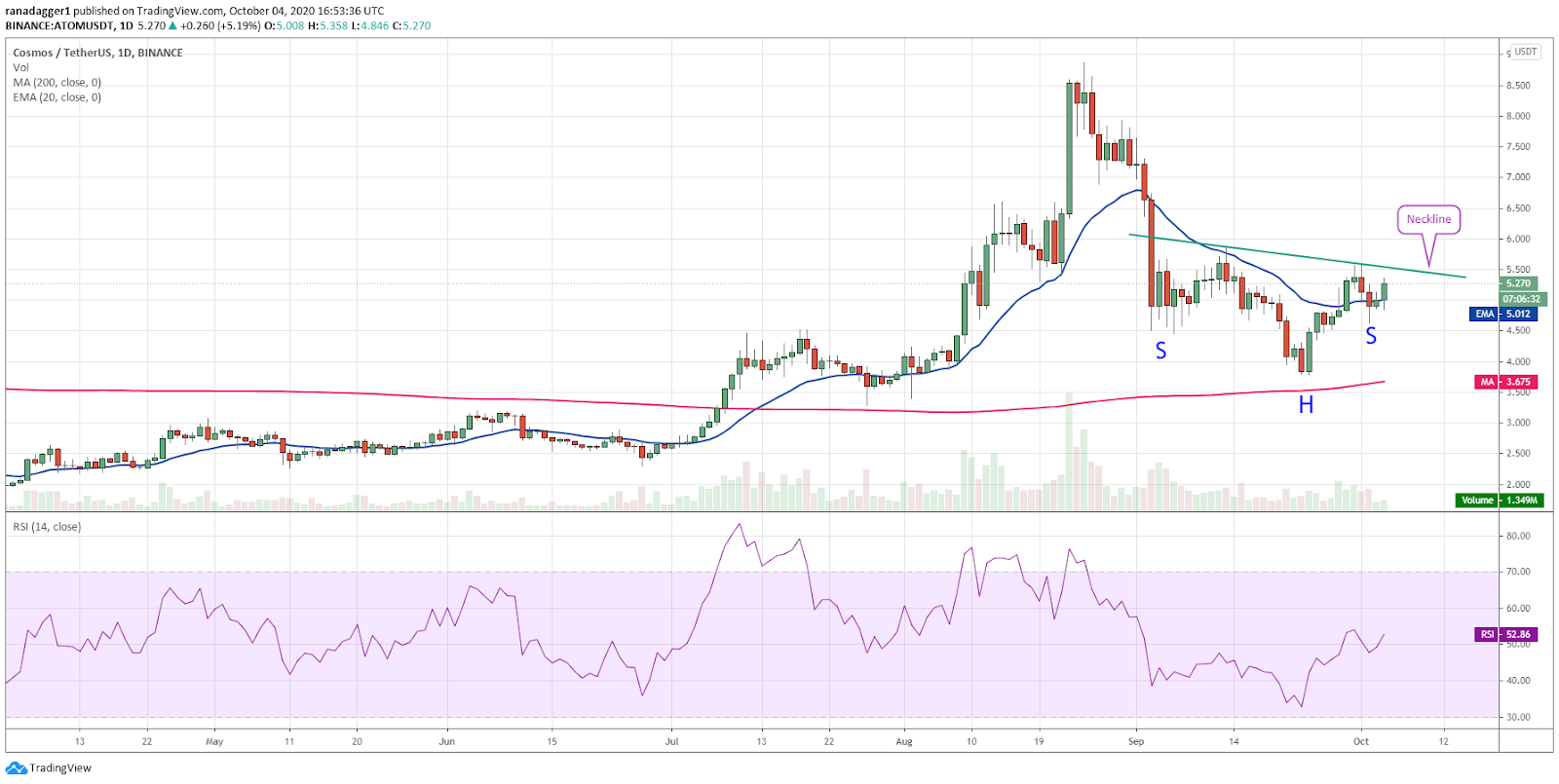 This setup has a target objective of $7.4 and if this level is crossed, the up-move can retest the highs at $8.877.

However, the 20-day EMA ($5) is currently flat and the RSI is just above the midpoint, which suggests a balance between supply and demand. Therefore, traders may wait for the price to break above the neckline before turning positive. 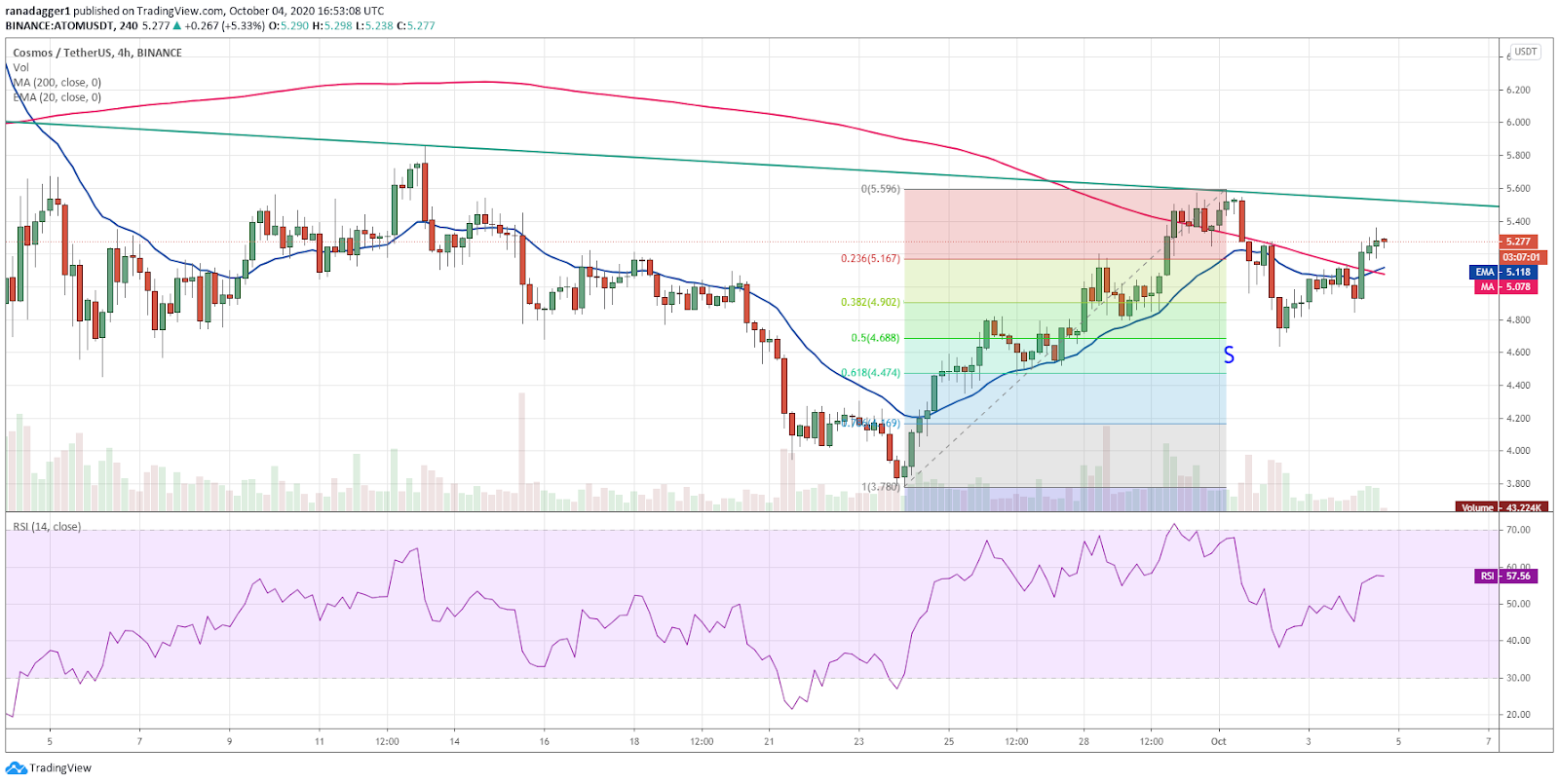 If they achieve the breakout and sustain it, the inverse head and shoulders pattern will complete.

This bullish view will be invalidated if the pair turns down from the current levels or from the overhead resistance and drops below the 61.8% retracement level of $4.474. Such a move could drag the price down to $3.78. 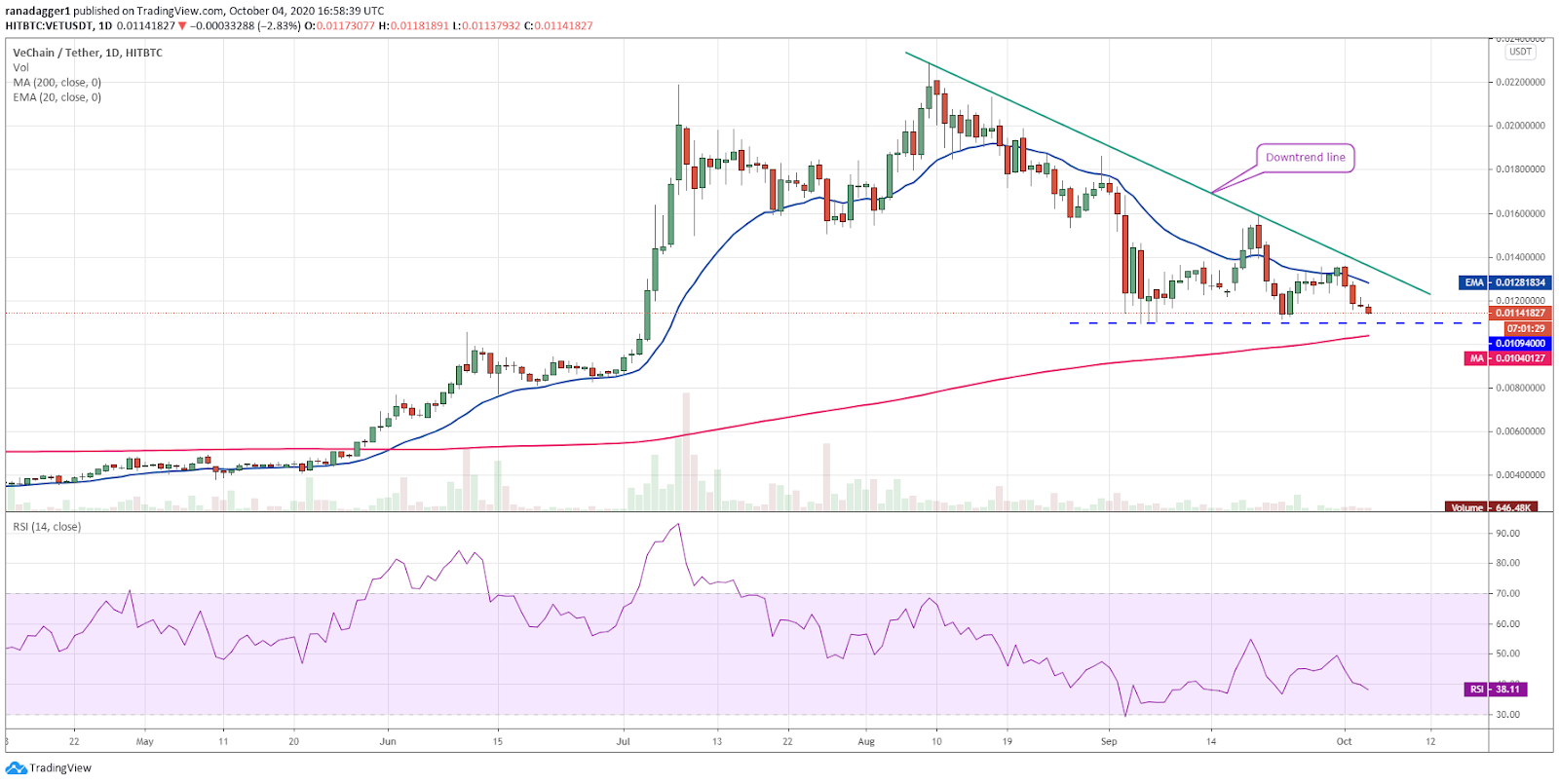 The 20-day EMA ($0.0128) is sloping down and the RSI has not been able to sustain above 50, which suggests that bears have the upper hand.

This negative view will be invalidated if the pair again rebounds off the support and rises above $0.0160. Such a move will suggest accumulation by the bulls at lower levels. 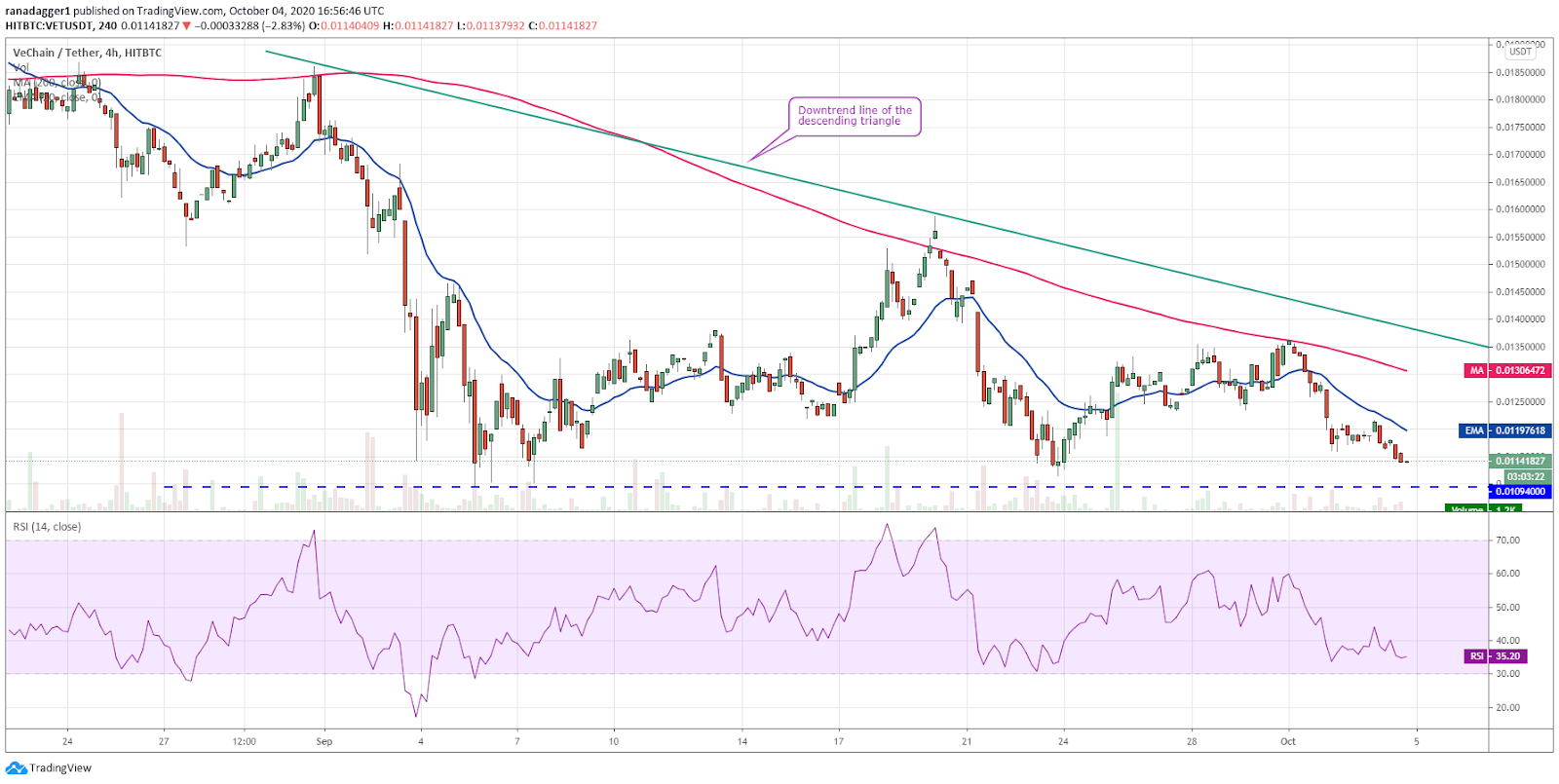 The 4-hour chart shows the formation of a descending triangle, which will complete on a breakdown and close (UTC time) below $0.010940. This setup has a target objective of $0.00328.

The downsloping moving averages and the RSI in the negative zone suggest that bears have the upper hand in the short-term.

This view will be invalidated if the pair rebounds off $0.010940 and rises above the downtrend line of the triangle.