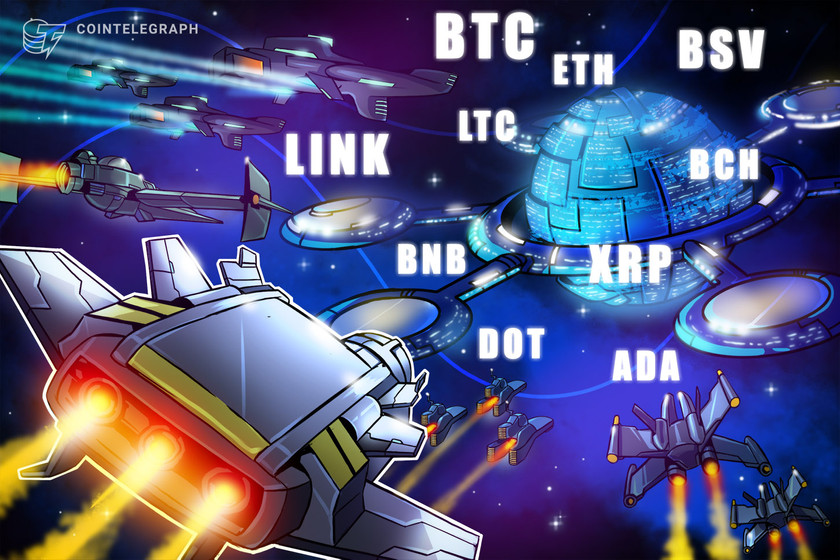 Bitcoin’s consolidation near a key overhead resistance is a sign of strength but the technical structure of most altcoins has weakened.

Bitcoin’s (BTC) dominance has risen from about 56% in early September to above 63%. This suggests that the market participants may be rotating their investments out of altcoins to buy Bitcoin. Due to this, several altcoins have either corrected or formed a range.

While legacy markets are keeping a close eye on the U.S. Presidential elections, Grayscale CEO Barry Silbert believes that Bitcoin price will gain irrespective of the result because the next President will continue to print more dollars.

Using data from CoinMetrics, Twitter user Julio Moreno recently highlighted that if Bitcoin could sustain above $10,000 for four more days, it would complete 100 days above this critical level.

History suggests that Bitcoin rallies vertically after it completes 100 days above a psychologically significant level. Bitcoin’s rally from $10 to $100, a 10-fold rise, took only 122 days after it had spent 100 days above $10.

Similarly, a move from $100 to $1000 happened in two days, and the rally from $1,000 to $10,000 was completed in 150 days. Therefore, investors are watching to see whether Bitcoin will continue following its precedence or will it chalk a new course.

Let’s study the charts of the top-10 cryptocurrencies to find out the path of least resistance.

The long tail on the candlesticks of the past two days shows that the bulls are accumulating on dips. However, the failure to sustain Bitcoin (BTC) above $13,600 suggests that the bears are attempting to defend the overhead resistance.

After the large range day on Oct. 28, the price action could be subdued for a few days as both the bulls and the bears try to gain an upper hand.

However, the upsloping moving averages and the relative strength index still in the overbought zone suggests that the path of least resistance is to the upside.

The bulls will again try to push the BTC/USD pair above $13,973.50 and if they succeed, the uptrend could resume.

Contrary to this assumption, if the index turns down from the current levels and slips below the 20-day exponential moving average ($12,518), the trend could turn in favor of the bears.

Ether (ETH) has broken below the 20-day EMA ($385) today but the bulls are attempting to defend the support at the 50-day simple moving average ($370). The uptrend line is also just below this level, hence, a bounce is likely.

If the bulls can push the price above the downtrend line, the ETH/USD pair may rise to the $420.50 overhead resistance. A break above this level could increase the possibility of a rally to $450 and then to $488.134.

The flat moving averages and the RSI near the midpoint do not indicate an advantage to either the bulls or the bears. Hence, the pair could remain range-bound for a few days.

After failing to sustain above the $0.26–$0.2295 range on Oct. 22, XRP has dropped to the support of the range. However, the long tail on the candlestick today suggests that bulls are using this dip to buy.

It is difficult to predict the direction of the breakout from the range, hence, it is better to wait for the price to break above or below the range before taking a large bet.

In a consolidation phase, the signals from the moving averages are choppy. The oversold levels on the RSI are considered as a buying opportunity and overbought levels are used to book profits because the expectation is that the range-bound action will continue.

The long wick on the candlestick on Oct. 28 shows that bulls booked profits when Bitcoin Cash (BCH) failed to rise above $280. Although the bulls purchased the dip to the 20-day EMA ($256) on Oct. 29, the price has again slipped today.

The RSI has broken down from the symmetrical triangle, which suggests that the bears are attempting to make a comeback. If the bears can sink the price below the 20-day EMA, a drop to $242 is possible.

This support could attract buying as the 50-day SMA ($238) is just below it. If the BCH/USD pair rebounds off this support, it could remain range-bound between $280–$242 for a few days.

Contrary to this assumption, if the bears sink the pair below the 50-day SMA, a drop to $210 could be on the cards.

Chainlink (LINK) has broken below the 20-day EMA ($11.21) support and the bears are now attempting to sink the price below the 50-day SMA ($10.58). If the bears succeed, the altcoin could dip to the uptrend line.

A break below the uptrend line could signal an advantage to the bears and open the gates for a possible decline to $8.38 and then $6.90.

Conversely, if the rebound off the current levels or the uptrend line sustains above the 20-day EMA, the bulls will again try to propel the LINK/USD pair above $13.28.

However, the flat moving averages and the RSI near the midpoint indicate a balance between supply and demand. This could result in a range-bound action in the short-term.

The bears are currently attempting to sink and sustain Binance Coin (BNB) below the $28.43 support. If they succeed, the altcoin will complete a double top pattern that could drag the price down to the target objective of $24.86.

The 20-day EMA ($29.81) has started to turn down and the RSI has plunged into negative territory, which suggests the bears have the upper hand.

However, if the bulls buy the current dip and push the price back above $28.43, the BNB/USD pair could rise to the 20-day EMA where it may face resistance.

If the price turns down from this resistance, it will suggest that the sentiment has turned bearish and traders are looking to sell on rallies.

Contrary to this assumption, if the bulls can push the price above $32, it will suggest that the bulls are back in control.

Polkadot (DOT) plummeted back below the neckline of the inverse head and shoulders pattern on Oct. 29. This drop has invalidated the bullish reversal pattern.

The bulls are currently trying to find support close to $3.80. If this support cracks, the bears will try to break the $3.5321 support and if they succeed, the DOT/USD pair could start a downtrend that may reach $2.60.

On the contrary, if the pair rebounds off the current levels, the pair may again attempt to rise above the moving averages and $4.6112. If that happens, it will suggest that the bulls are accumulating at lower levels.

The reversal on Oct. 28 attracted further follow up selling on Oct. 29 and Litecoin (LTC) broke the 38.2% Fibonacci retracement level of $54.9361. Currently, the bulls are attempting to defend the $52.36 support.

If they succeed, the LTC/USD pair could consolidate between $52 and $60 for a few days. The flattening 20-day EMA ($53) and the RSI just above the halfway mark also suggest a few days of range-bound action.

Bitcoin SV (BSV) broke below the 20-day EMA ($167) on Oct. 29 and that has been followed by further selling today. Currently, the altcoin has dropped to the uptrend line of the symmetrical triangle.

A break below the uptrend line could drag the price down to the $146.20 support where the bulls are likely to step in and buy. A bounce off $146.20 could keep the BSV/USD pair stuck inside the range for a few more days.

The flat moving averages and the RSI in the negative territory also suggest a balance between supply and demand. This view of a range formation will be invalidated if the bulls push the price above $180.63 or the bears sink the pair below $146.20.

Even if the ADA/USD pair rises from the current levels, the bears will try to sell the bounce to the 20-day EMA. If the pair turns down from this resistance, it will increase the possibility of a break below $0.0893.

This bearish view will be invalidated if the bulls can push the pair above $0.1040440. Such a move will suggest accumulation at lower levels.