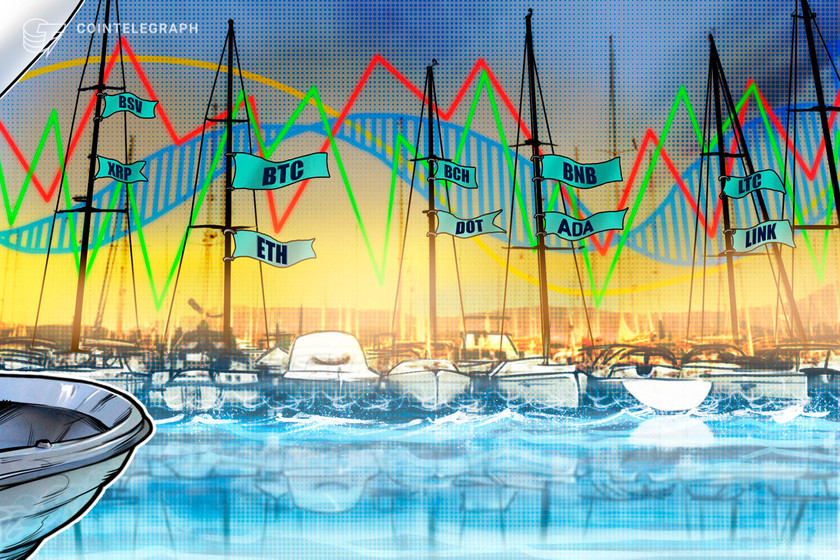 The equity markets across Europe closed deeply in the red and the U.S. markets are also witnessing intense selling pressure as investors fear a rise in COVID-19 cases could stall the fragile economic recovery. This increasingly negative sentiment has also dragged gold and Bitcoin (BTC) prices lower, while the U.S. dollar currency index has risen.

In 2020, Bitcoin has largely acted as an uncorrelated asset, barring short periods of time when it has followed the S&P 500 or gold. Therefore, investors should take a longer-term view rather than panicking due to short-term volatility.

A survey by Grayscale has shown that the number of investors who are familiar with Bitcoin has risen from 53% in 2019 to 62% this year. The poll also showed that about 55% of the respondents were interested in Bitcoin investment products this year, compared to 36% in 2019.

With greater participation from both retail and institutional investors, the crypto markets may become less prone to manipulation and that could in turn attract more investments.

When an asset enters a correction, knowing the strong support levels can help traders to make a more informed decision. Therefore, let’s study the charts of the top-10 cryptocurrencies in order to spot the critical levels that may attract buyers.

Bitcoin (BTC) has turned down sharply from just under the critical overhead resistance of $13,973.50, which suggests profit-booking by short-term traders and likely initiation of short positions by the aggressive bears.

If the price closes below $13,041.5, the BTC/USD pair would form a bearish engulfing candlestick pattern, which is a warning sign that the trend may be reversing. The first stop on the downside is the 20-day exponential moving average ($12,289).

A break below this support will suggest that the bullish momentum has weakened and that could intensify selling, dragging the price to the 50-day simple moving average ($11,238)

However, as the moving averages are sloping up and the relative strength index has corrected its overbought levels, the bulls are likely to buy the dips to the 20-day EMA.

A strong bounce off this support will suggest that the sentiment is bullish as traders are buying on dips.

If the bears sustain the price below the 20-day EMA, a drop to the uptrend line is likely. A break below this support could drag the ETH/USD pair to the next support at $333 and then to $308.096.

XRP continues to trade inside a range as the flat moving averages and the RSI just below the midpoint suggest a balance between supply and demand. If the bears can sink and sustain the price below the 50-day SMA ($0.245), the altcoin could drop to $0.2295.

A break below the $0.2295–$0.2197 support zone could tilt the advantage in favor of the bears. However, if the price rebounds off the support zone, the XRP/USD pair could extend its stay inside the range for a few more days.

Contrary to this assumption, if the pair rebounds off the 50-day SMA and rises above the $0.26 resistance, it will indicate that bulls are in command. Above $0.26, the pair could start an up-move that may reach $0.30.

The upsloping moving averages and the RSI above 62 suggests that the bulls are in control. However, the RSI has formed a negative divergence and a possible symmetrical triangle.

The failure to drive the price above $280 could attract profit-booking by short-term traders. A break below the 20-day EMA ($256) will signal that the momentum has weakened.

The rebound off the $11.199 support on Oct. 26 was short-lived as the bulls could not sustain the higher levels on Oct. 27. The bears have jumped on this opportunity and are currently attempting to sink Chainlink (LINK) back below $11.199.

If they succeed, the LINK/USD pair could drop to the trendline. A break below the trendline could signal an advantage to the bears that may result in a fall to $8.38.

On the contrary, if the pair rebounds off the current levels, the bulls will once again try to push the price above $13.28 and extend the recovery to $18.

The indicators are not giving any clear signals as both moving averages have flattened out and the RSI has dropped close to the halfway mark, suggesting a balance between supply and demand.

The bulls pushed Binance Coin (BNB) above the $32 resistance on Oct. 27 but could not sustain the higher levels. This shows that the bears are defending the zone between $32–$33.3888.

However, the trend remains up as both moving averages are sloping up and the RSI is in the positive territory. Therefore, the bulls may attempt to buy on dips to the moving averages. The uptrend will resume on a close above $33.3888.

On the other hand, if the bears sink the price below the 50-day SMA, it may increase the possibility of a deeper correction to $26 and then 22.

The bulls pushed Polkadot (DOT) above the $4.6112 resistance on Oct. 26 but the sellers were in no mood to relent and they aggressively defended the overhead resistance at $5 on Oct. 27.

The failure to sustain above $4.6112 has again dragged the price down to the neckline of the inverse head and shoulders pattern.

If the DOT/USD pair rebounds off this support, the bulls will again try to propel the price above $5 and reach the overhead resistance at $5.5899.

Contrary to this assumption, if the bears sink the price below the neckline, the pair may again drop to $3.5321. A bounce off this support could keep the pair range-bound for a few days.

Litecoin (LTC) bounced off the 38.2% Fibonacci retracement level of $54.9361 on Oct. 26, which showed that the bulls were not willing to wait for lower levels to buy as they expected the uptrend to resume.

Although the bulls had pushed the LTC/USD pair above $60 today, they could not sustain the higher levels. This attracted aggressive selling from short-term traders and the price again dropped to the 38.2% retracement level.

However, if the pair again rebounds off $54.9361, a few days of range-bound action is possible. The pair is likely to pick up momentum after the price sustains above $60.

The bulls purchased the dip to the breakout level of the symmetrical triangle on Oct. 26 but they could not push Bitcoin SV (BSV) above the $180–$185.14 overhead resistance zone on Oct. 27 and start a new uptrend.

The failure to rise above the overhead resistance could have attracted selling by the short-term bulls and the aggressive bears. As a result, the BSV/USD pair has again dropped down to the 20-day EMA ($168).

If the pair rebounds off the 20-day EMA, the bulls will again attempt to propel the price above the overhead resistance zone.

Conversely, if the bears sink the price below the moving averages, the pair could may to the uptrend line of the triangle and then to $146.20.

This shows that demand dries up at higher levels. The bears pounced on this sign of weakness and resumed their selling today and have managed to sink the ADA/USD pair below the 50-day SMA.

If the price sustains below this level, the next support is at $0.090 and if this support also gives way, the decline could extend to the critical support at $0.0755701.

With the latest fall, the 20-day EMA has started to turn down and the RSI has dipped into the negative zone, indicating an advantage to the bears.

This bearish view will be invalidated if the pair turns around from the current levels or the immediate support and rises above $0.104044.