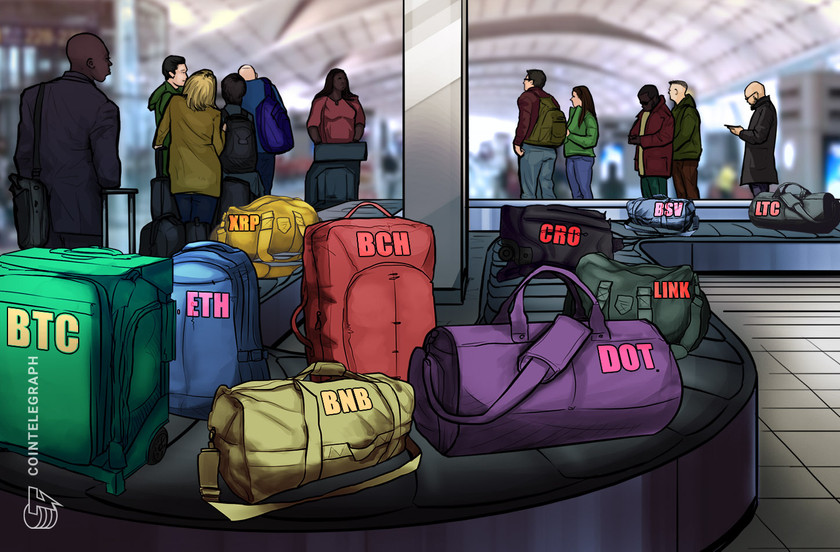 The bulls are buying the dips in Bitcoin and a few altcoins, suggesting that investor sentiment remains positive.

The shallow pullback in Bitcoin (BTC) following the news of the CFTC’s regulatory crackdown on BitMEX and the late announcement that U.S. President Donald Trump tested positive for coronavirus shows that the underlying sentiment is still bullish.

Generally, most damage during such periods of negative news flow is caused by the squaring up of leveraged positions. Data shows that Bitcoin futures volume and open interest has been dropping since hitting the peak in early September.

This means that there were fewer long positions that had to be squared up in a hurry and it also may explain why a sharper crash was avoided.

Even though Bitcoin has largely been range-bound for the past few weeks, on-chain data shows a sharp inflow of new participants. Analysts view this user growth as positive because it suggests that new traders consider Bitcoin as a store of value.

Traders can look for the cryptocurrencies that bounce back quickly from the current weakness because that shows strong buying on dips. Let’s analyze the top-10 cryptocurrencies to spot the critical support and resistance levels.

Bitcoin once again reversed direction from close to $11,000 on Oct. 1, which shows that the bears are aggressively defending the zone between the 20-day exponential moving average ($10,704) and the 50-day simple moving average ($11,017). 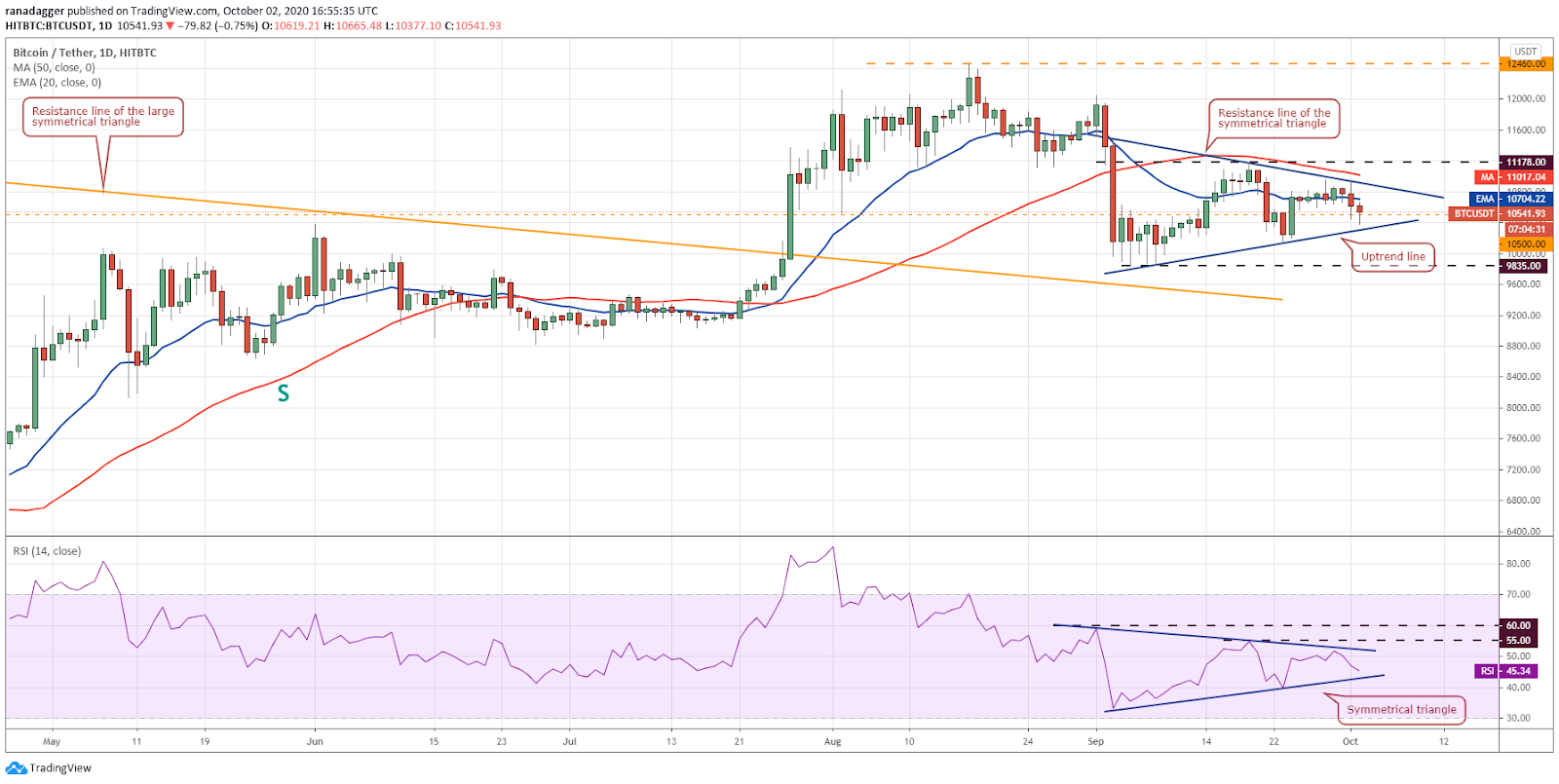 The price action of the past few days has formed a symmetrical triangle pattern, which shows indecision among the bulls and the bears about the next directional move. This uncertainty could resolve after the price breaks above or below the triangle.

The gradually downsloping moving averages and the relative strength index in the negative territory suggest that bears have a slight advantage.

If the BTC/USD pair breaks and closes (UTC time) below the triangle, it will suggest that the bears have overpowered the bulls. The sellers will then try to break the critical support at $9,835 and if they succeed, a drop to $9,000 could be on the cards.

However, the long tail on today’s candlestick shows that the bulls are accumulating on dips to the uptrend line. They will now try to push the price above the resistance line of the triangle.

If they succeed, the pair may face minor resistance at $11,178 but if the bulls can push the price above this level, a rally to $12,460 is possible.

It is difficult to predict the direction of the breakout with certainty, hence, it is better to wait for the breakout to happen before taking large bets.

The bulls had pushed Ether (ETH) above the downtrend line on Oct. 1, but they could not sustain the higher levels. This may have attracted profit-booking by short-term traders that pulled down the price back below the 20-day EMA ($358). 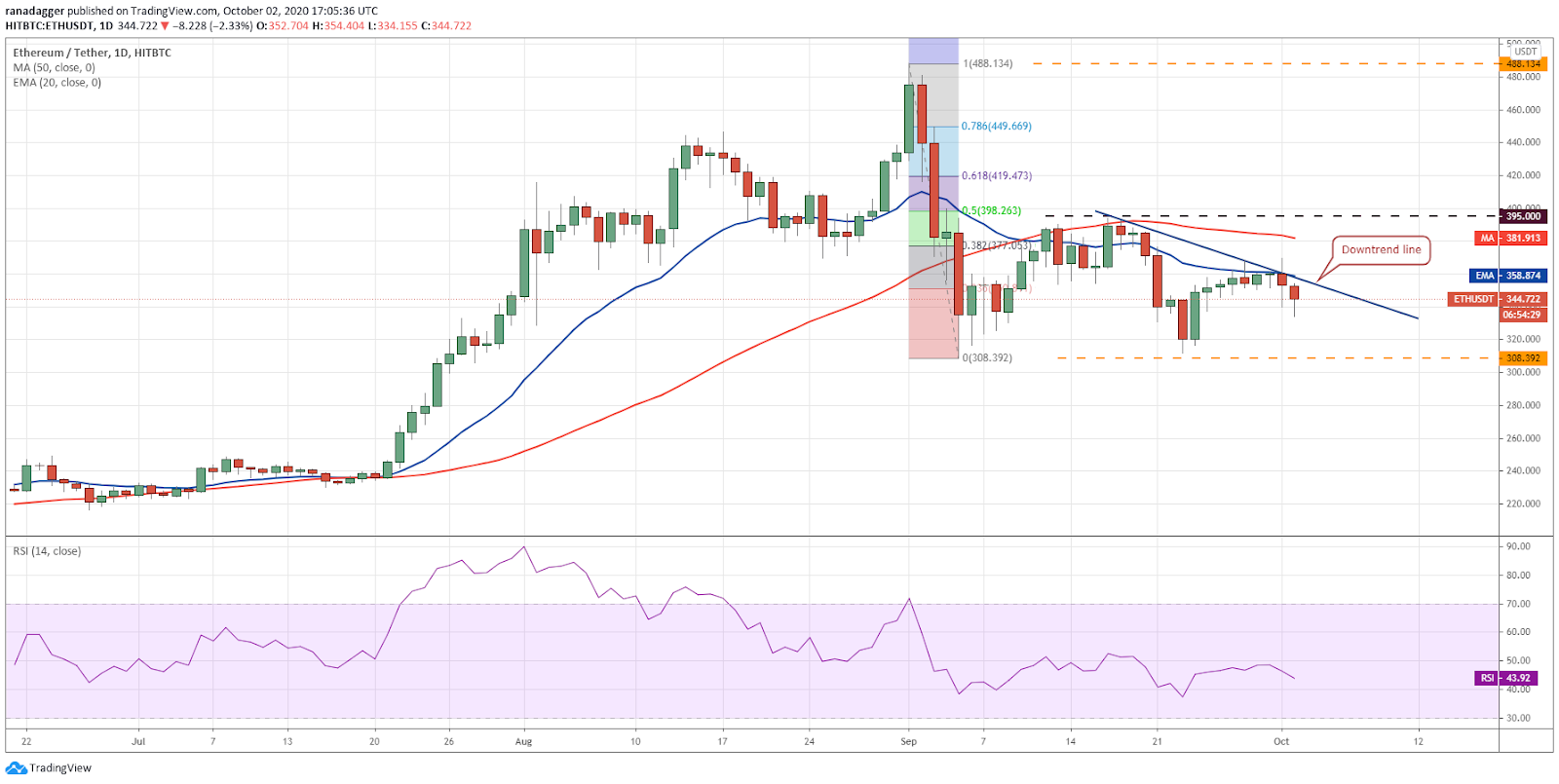 The gradually downsloping moving averages and the relative strength index in the negative zone suggests that sellers have the upper hand.

However, the previous two sharp bounces off the $308.392 support zone show that the bulls aggressively accumulate closer to this level. Hence, the buyers may again use the current dips to buy.

A breakout of the 20-day EMA will be the first indication that the correction could be over. Conversely, a break below $308.392 may signal the start of a deeper correction to $240.

XRP’s failure to rise above the 20-day EMA ($0.241) could have attracted profit-booking by the aggressive bulls and shorting by the bears. The downsloping moving averages and the RSI in the negative zone suggest that the sellers have the upper hand. 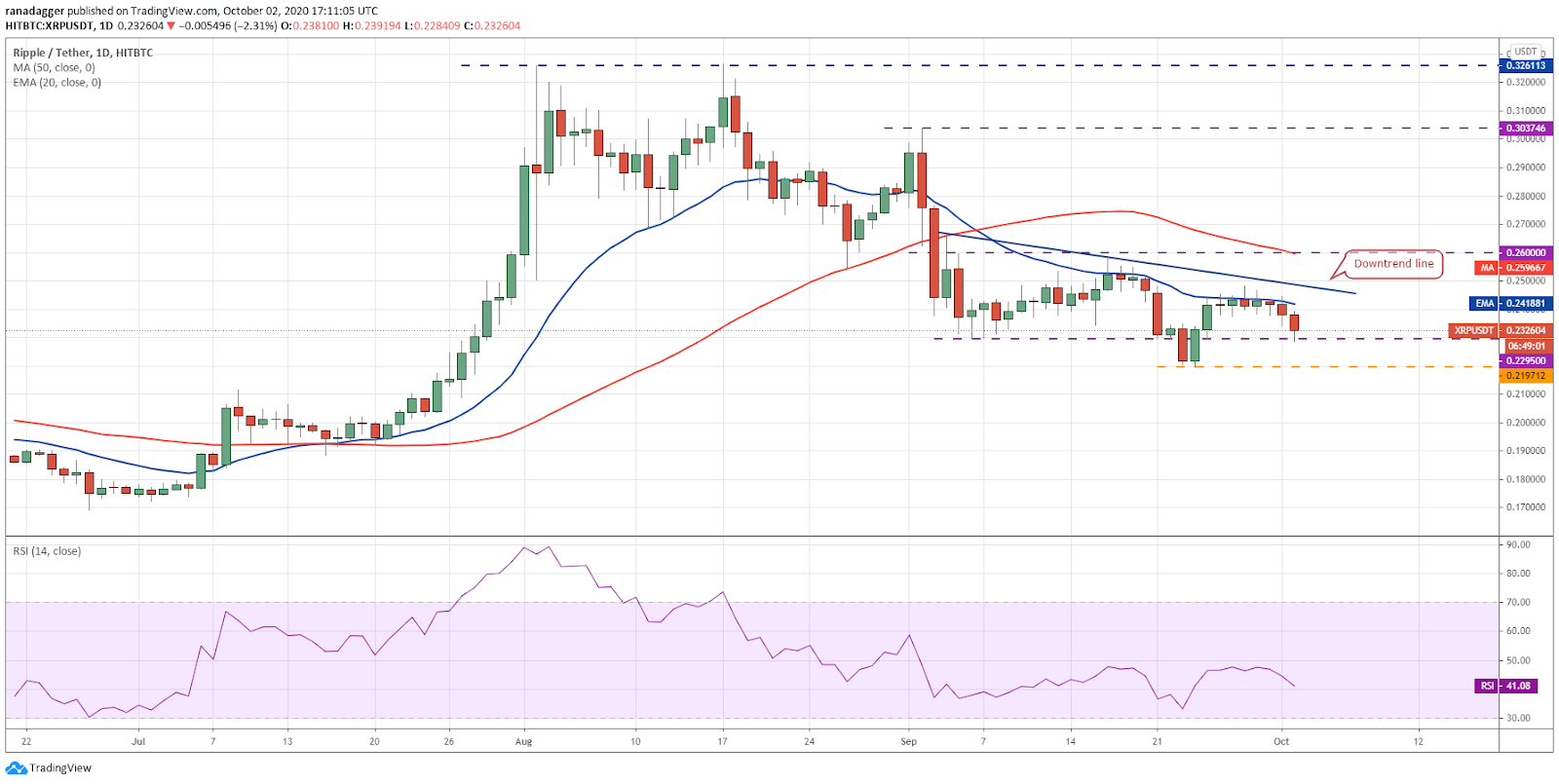 However, the bulls are likely to defend the support zone aggressively and make one more attempt to push the price above the 20-day EMA and the downtrend line. If they succeed, it could signal a possible change in trend.

Bitcoin Cash (BCH) turned down from just below the downtrend line on Oct. 1 and has continued its downward march towards the critical support at $200. 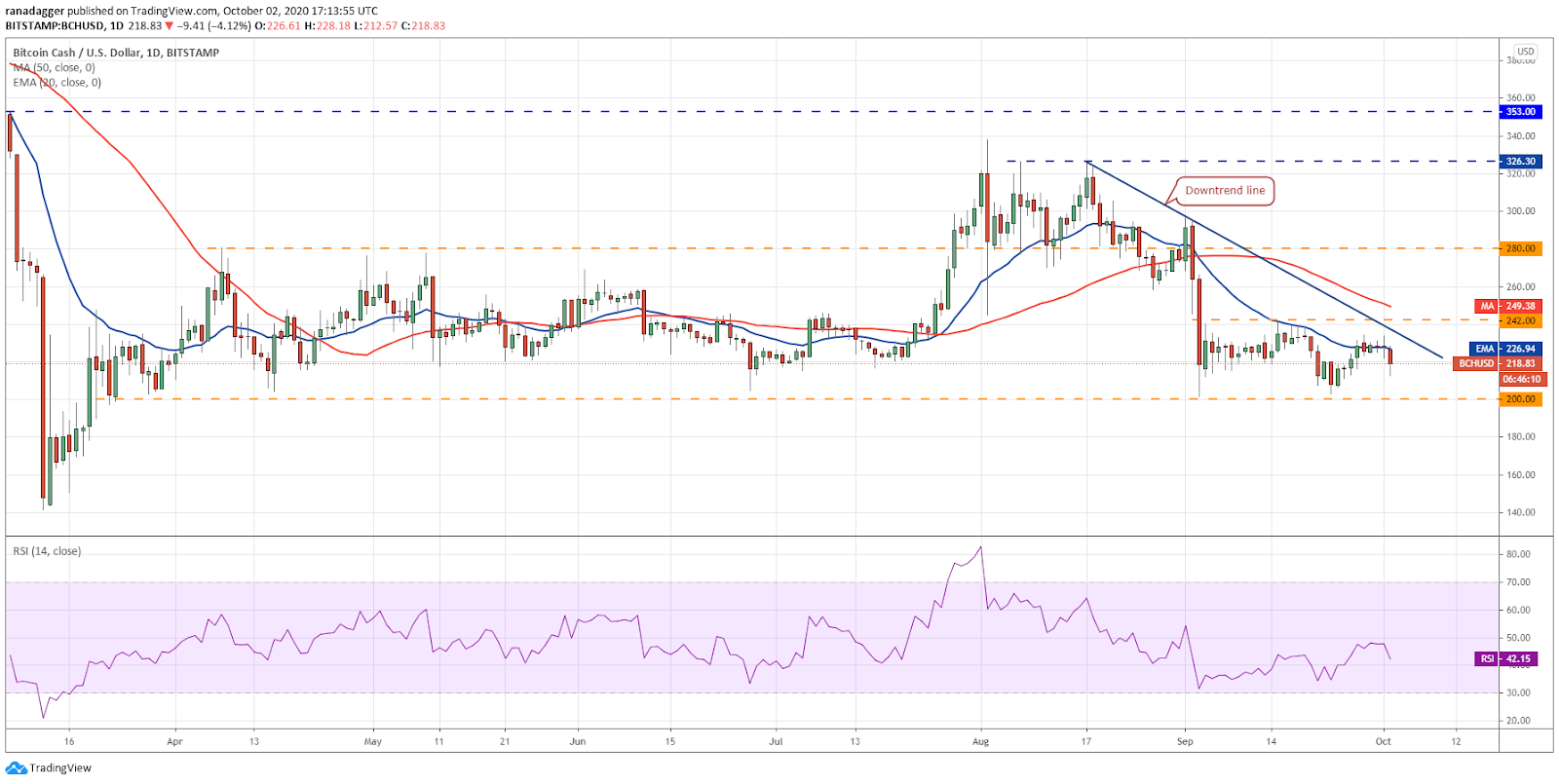 The repeated retest of a support level within a short interval tends to weaken it. A breakdown and close (UTC time) below $200 could lead to panic selling and increase the possibility of a deeper fall to $140.

Contrary to this assumption, if the price turns up from the current levels or rebounds sharply from the $200 support, it will suggest that bulls are accumulating at lower levels.

A breakout and close (UTC time) above the downtrend line will be the first sign of strength and a break above $242 will increase the possibility of a rally to $280. 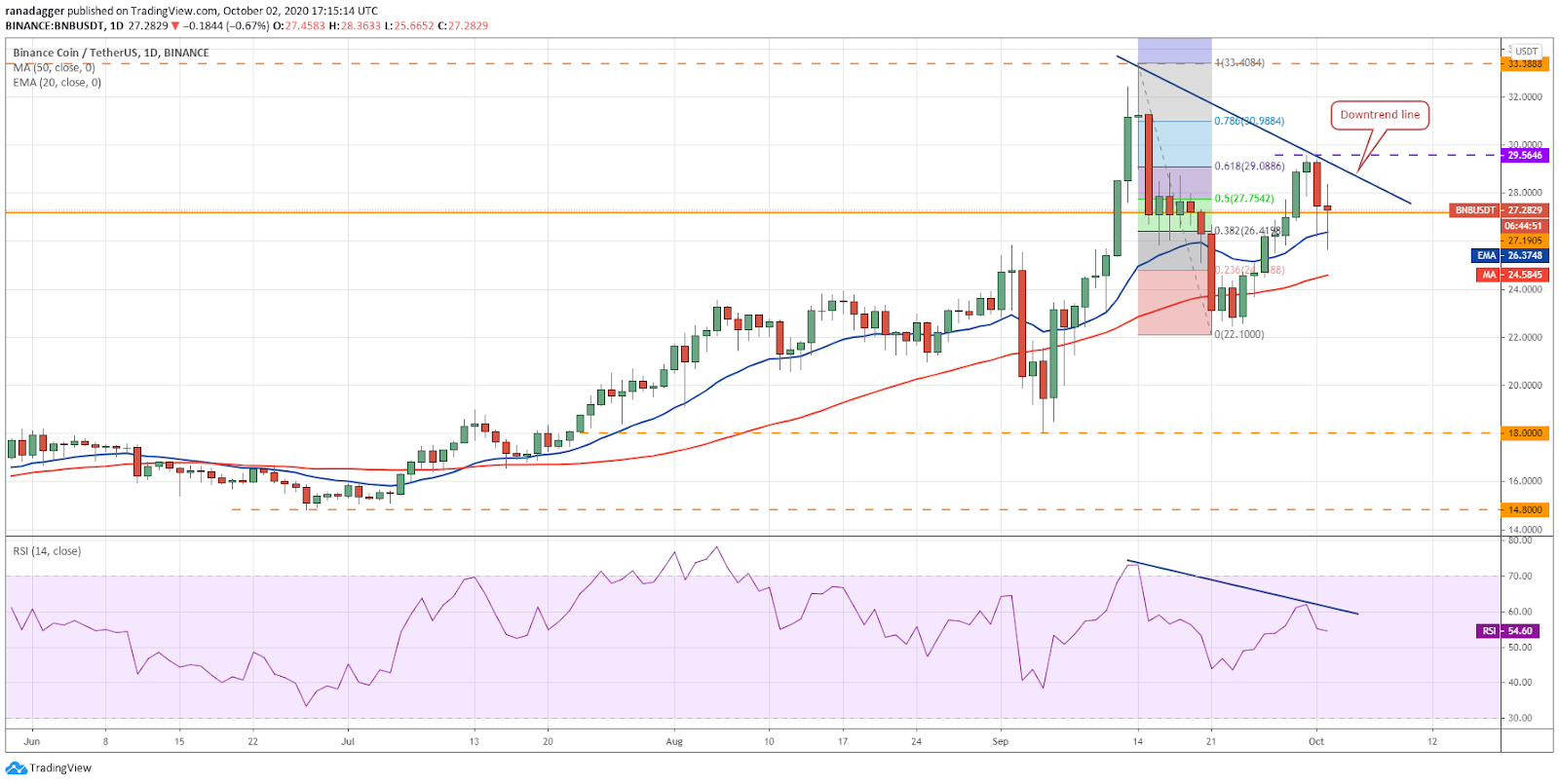 The upsloping moving average and the RSI in the positive zone suggest that the advantage is with the bulls. If the buyers can push the BNB/USD pair above the downtrend line and the overhead resistance at $29.5646, the uptrend could resume.

Contrary to this assumption, if the bears sink the BNB/USD pair below the moving averages, it will increase the possibility of a deeper correction to $22.20. 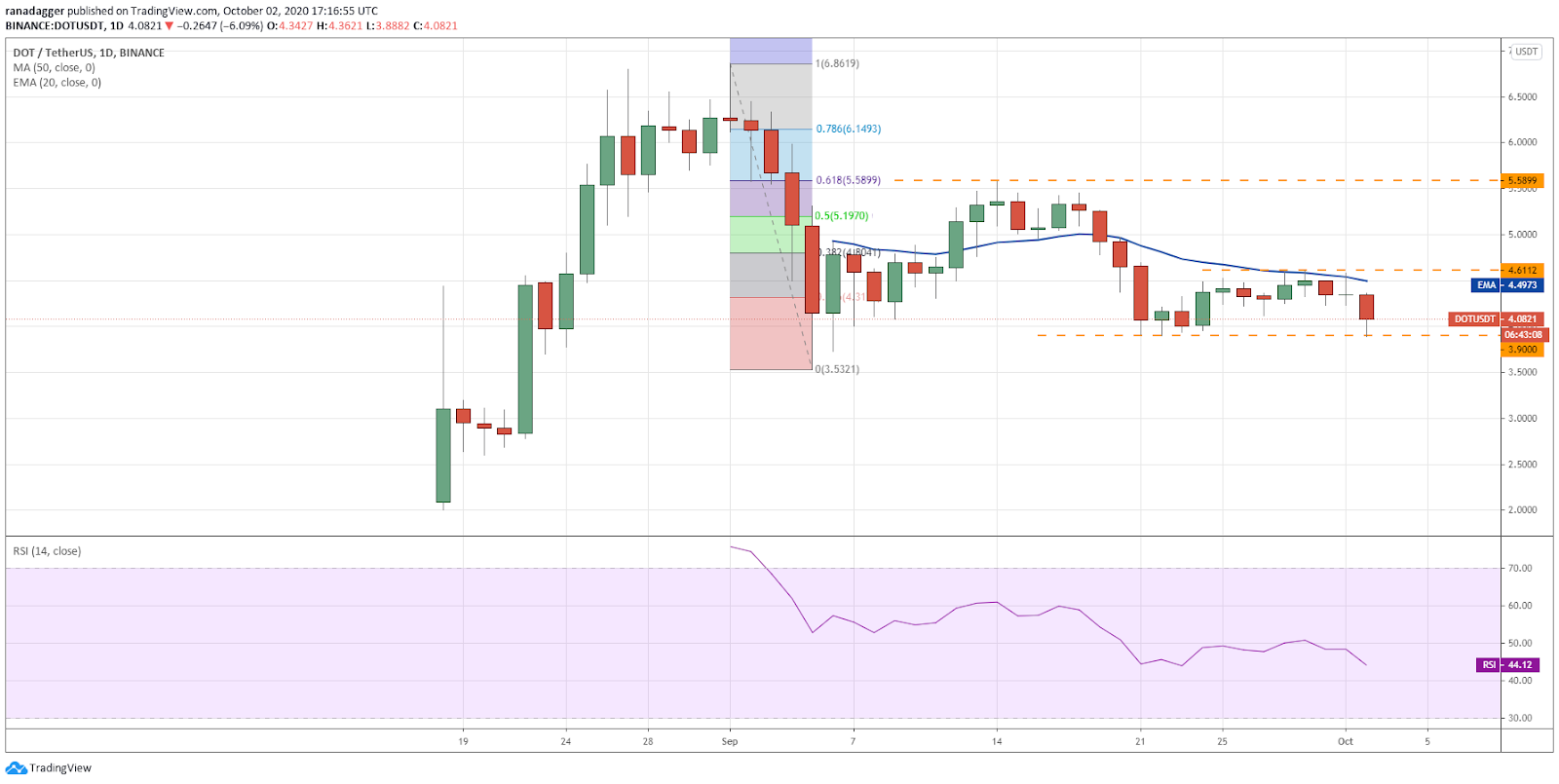 The downsloping 20-day EMA and the RSI in the negative zone suggest that the path of least resistance is to the downside.

If the bears can sink the DOT/USD pair below the support zone, a decline to $2.782 and below it to $2 is possible.

However, if the pair rebounds off the support zone, the bulls will make one more attempt to push the price above the 20-day EMA and the overhead resistance at $4.6112. If they succeed, it will open up the doors for a move to $5.5899.

Chainlink (LINK) has broken below the $9.3771 support and if the bears can sustain the lower levels, a retest of $6.90 is possible. The downsloping moving averages and the RSI close to 40 suggests that the path of least resistance is to the downside. 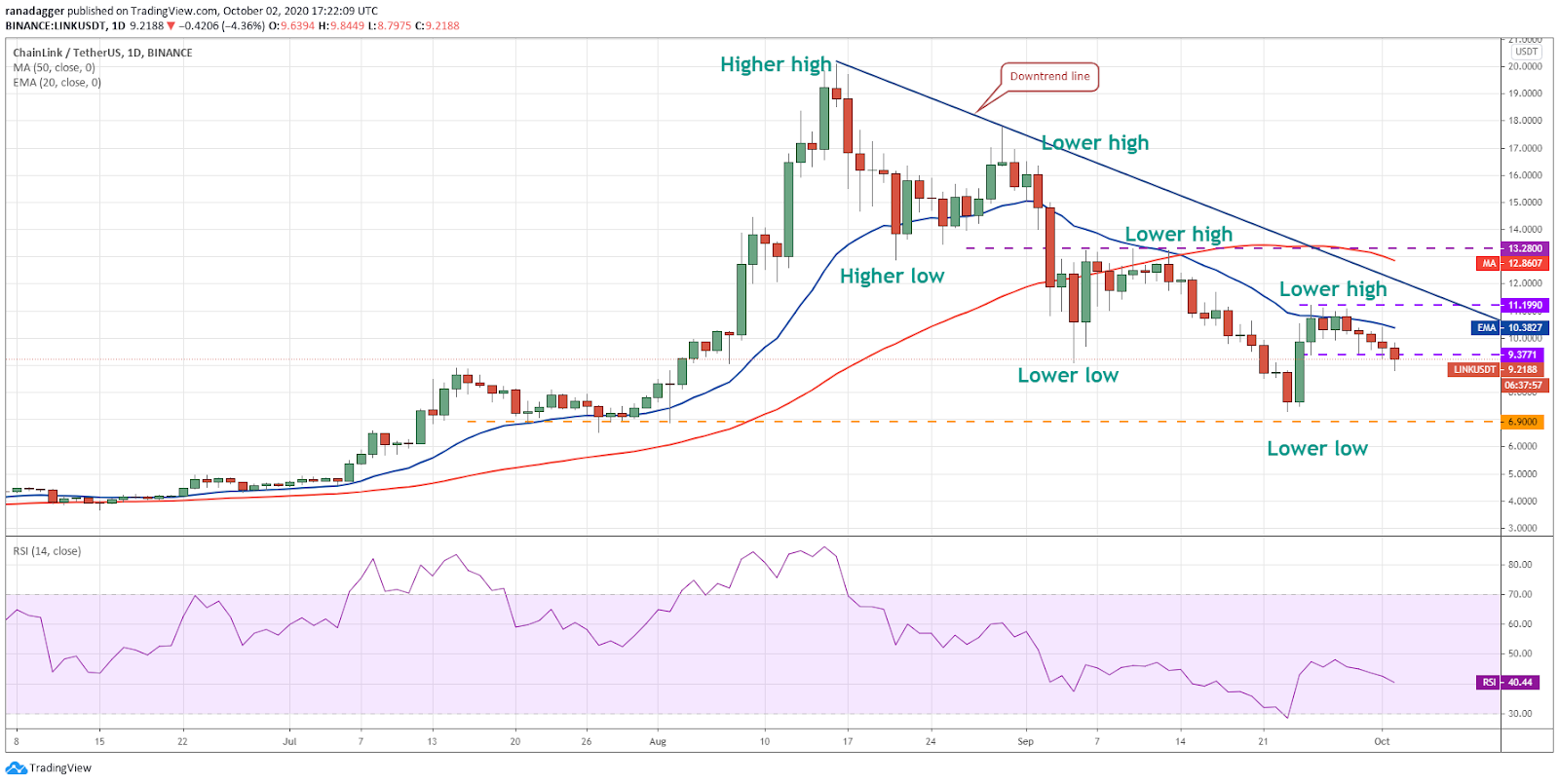 If the bears sink the price below $6.90, the downtrend could resume and the next support is at $5.70.

The bulls will have to break the lower high and lower low formation by pushing the price above $11.1990 to signal a possible change in trend.

If they are able to achieve this, the LINK/USD pair may start a new uptrend above the downtrend line.

The bears are attempting to sink and sustain Crypto.com Coin (CRO) below the critical support at $0.144743. If they succeed, it will complete a descending triangle pattern, which is a reversal setup. 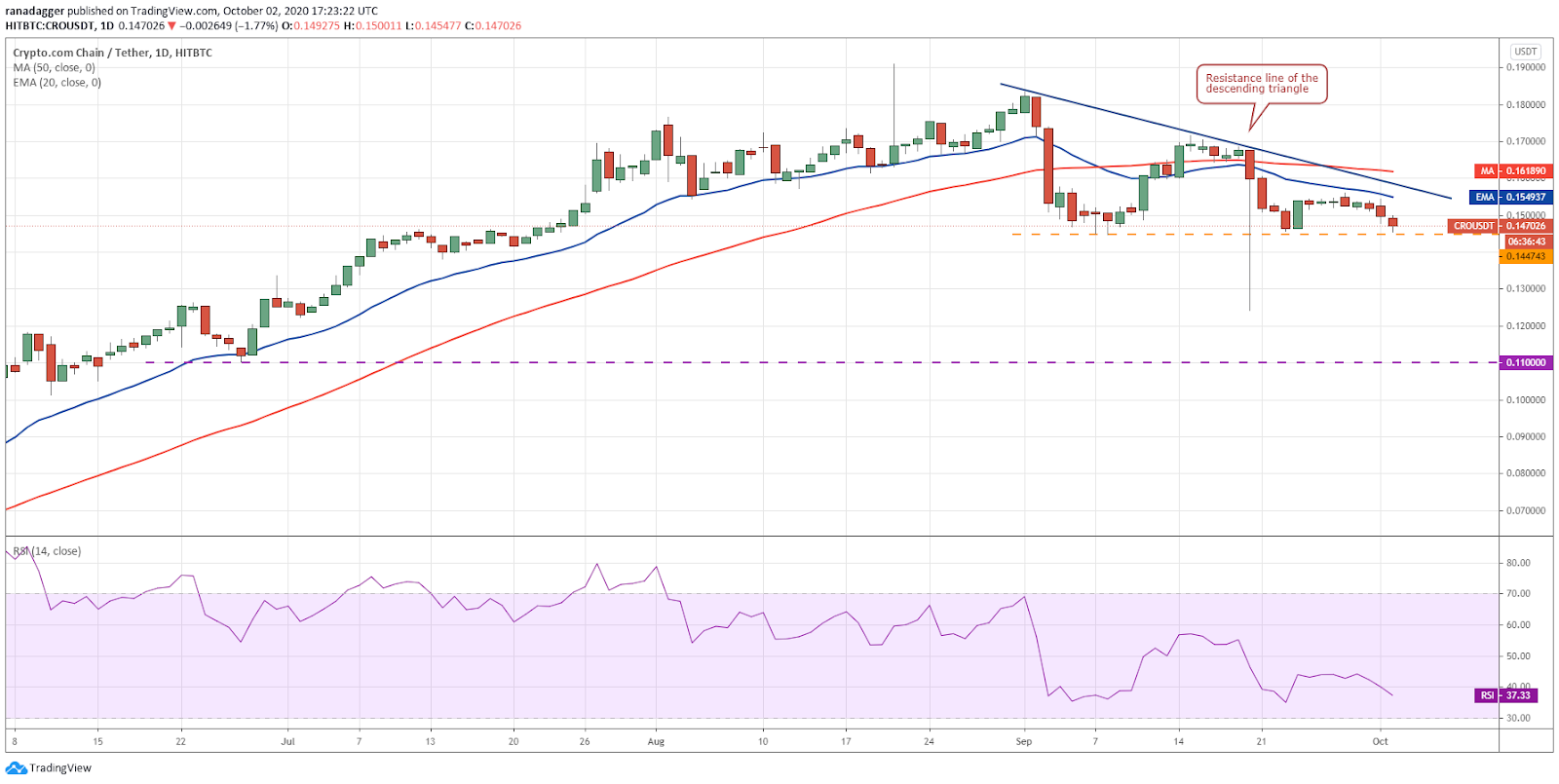 Bitcoin SV (BSV) climbed above the downtrend line on Sep. 30 and Oct. 1 but on both days, the bulls could not clear the 50-day SMA ($178), which suggests that the bears are defending this resistance. 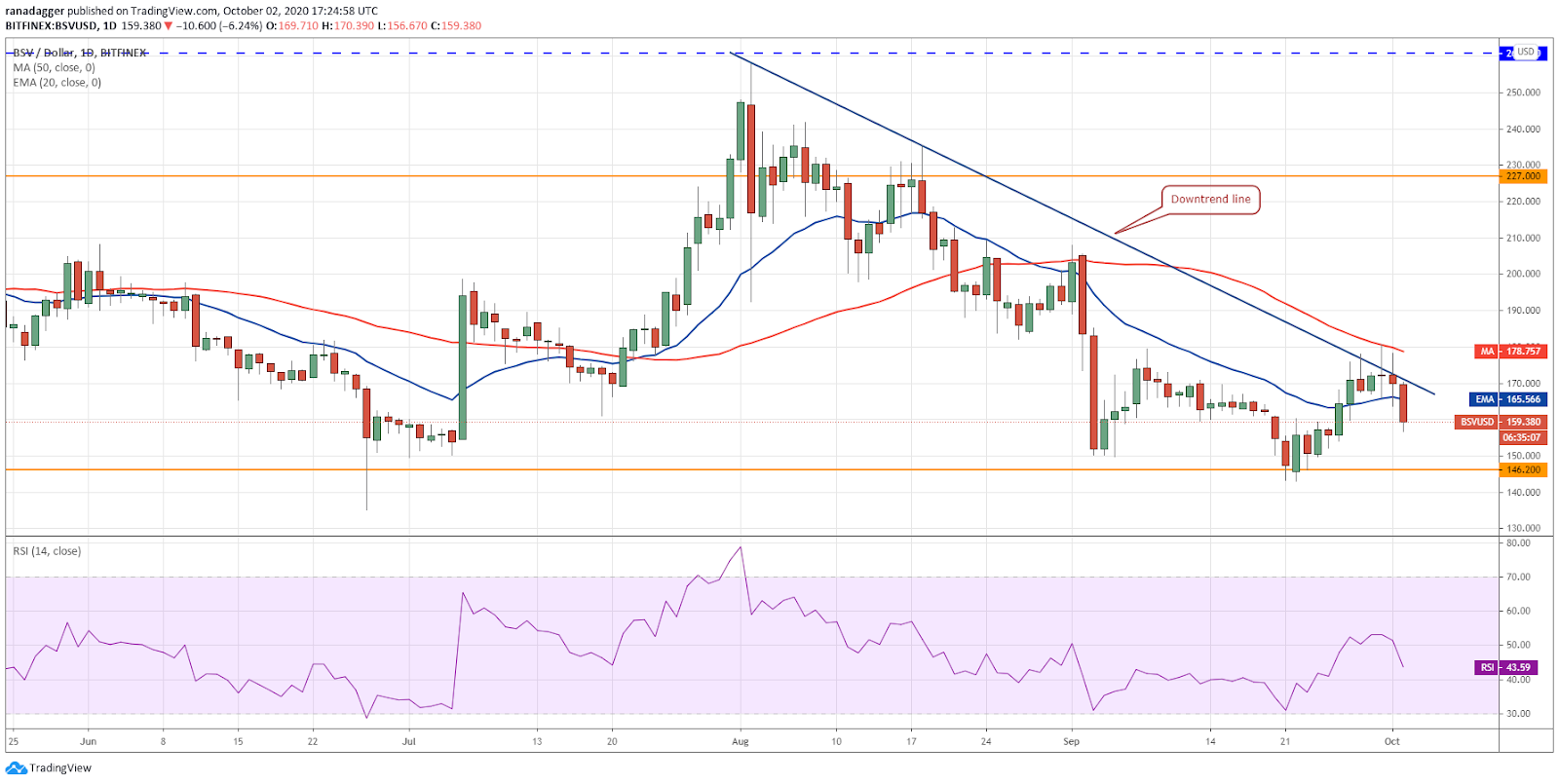 The failure to clear the hurdle at the 50-day SMA could have attracted profit booking by the short-term traders and shorting by the aggressive bears.

As a result, the BSV/USD pair has again dipped back below the 20-day EMA. The bears will now once again try to challenge the $146.20–$135 support zone.

If they are able to sink the price below this zone, the pair may decline to $100. This bearish view will be invalidated if the pair turns up and sustains above $180.

Litecoin (LTC) broke above the 20-day EMA ($46.83) on Oct. 1 but could not rise above the downtrend line. This could have led to profit booking by the short-term traders and has pulled the price back below the 20-day EMA. 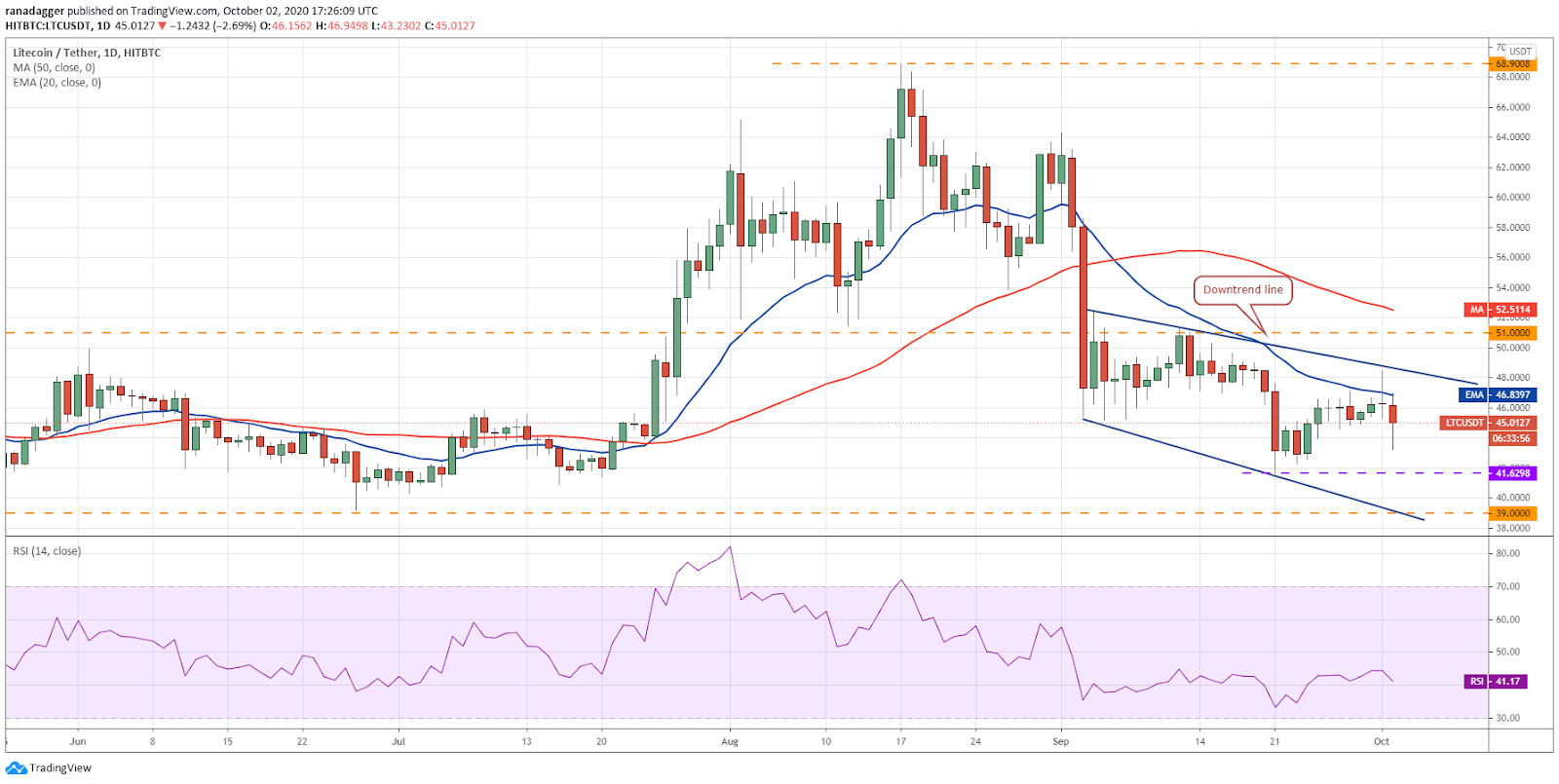 However, the long tail on today’s candlestick suggests that the bulls are buying on dips. The buyers will once again try to push the price above the downtrend line.

This bullish view will be invalidated if the pair turns down and breaks below the $41.6298–$39 support zone. Such a move could start a new downtrend.