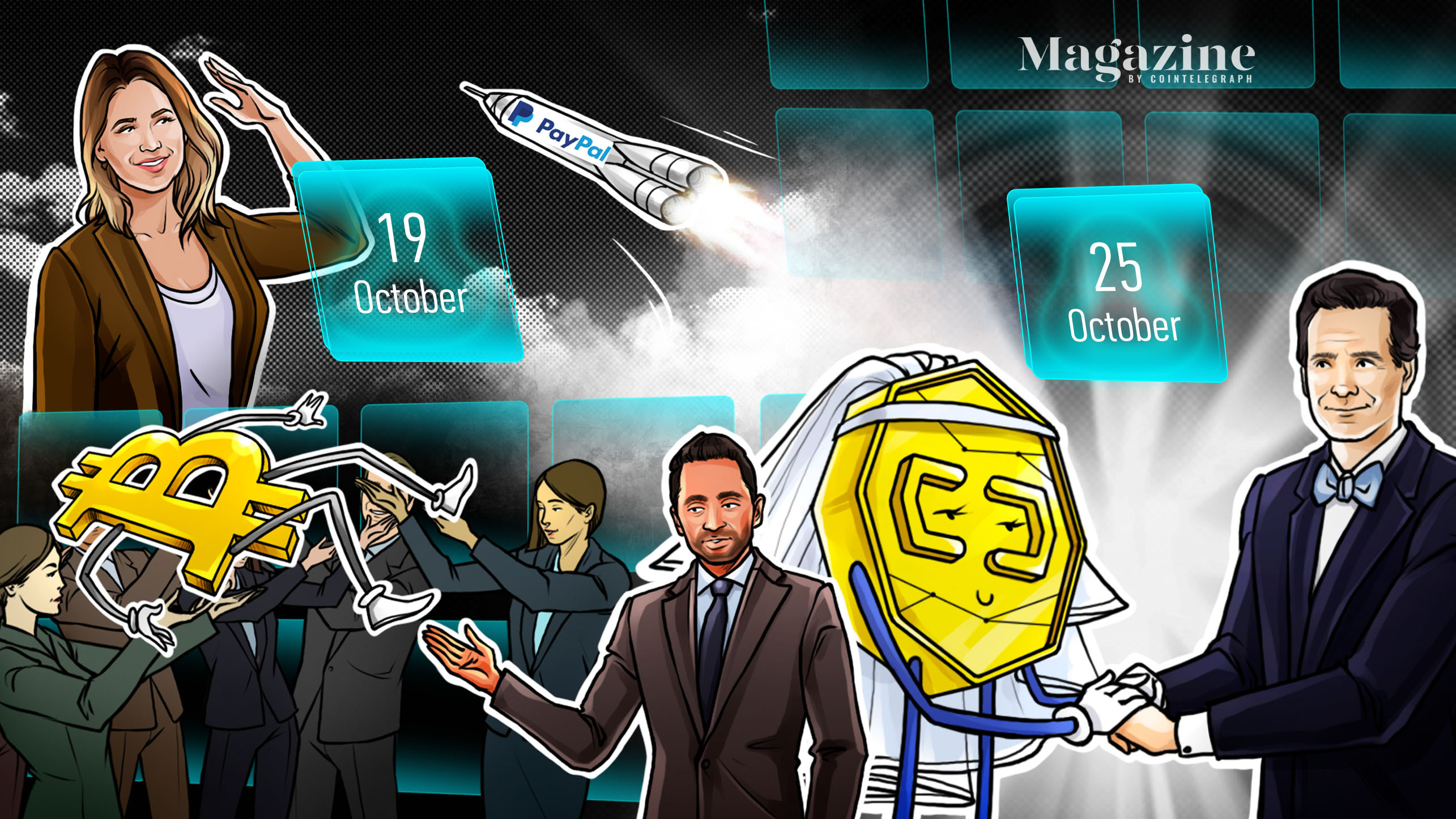 When rumors started circulating in June that PayPal was planning to launch a crypto service, the fintech giant was tight-lipped.

But this week, PayPal was ready to show its hand, confirming that it will allow its 346 million active accounts to buy and sell cryptocurrencies.

It isnt an exaggeration to say that this is a huge deal for the mainstream adoption of digital assets. This will introduce large numbers of everyday consumers to crypto for the first time.

No fees are going to be charged for conversions until the end of this year. However, merchants wont be able to support crypto transactions until the first half of 2021. Unsurprisingly, PayPals big news served as dynamite for Bitcoin. The worlds biggest cryptocurrency smashed through $13,000 on Wednesday, gaining more than $1,000. Thats only the third time that BTC has hit this level since its record high in 2017.

All of this helps strengthen Bitcoins position. Even before the announcement, BTC had enjoyed a sustained period in five-figure territory after spending most of the past three months trading above $10,000.

Mati Greenspan, the founder of Quantum Economics, said the PayPal link was undeniable: Theres no doubt in my mind that this bit of news is almost solely responsible for todays extended gains.

other cryptocurrencies that PayPals going to support also enjoyed chunky gains on Wednesday. ETH was up 8%, BCH surged 9%, and LTC rose by a whopping 15%.

And it wasnt just the crypto industry that was going wild. In the aftermath of the news, PYPLs share price hit a record high. Unfortunately, the uptick wasnt enough to prevent Bitcoins market cap from overtaking PayPals on Thursday.

PayPal rumored to be eyeing acquisition of crypto custodian BitGo

Inevitably, attention now turns to what PayPals offering will look like, whether crypto exchanges need to be worried, and the companys plans for the future.

Were starting to get an idea of what to expect. PayPal has partnered with Paxos to deliver the service, and it has obtained a conditional cryptocurrency license from the New York State Department of Financial Services.

On Friday, reports from Bloomberg suggested that PayPal is looking to acquire a crypto asset custody firm, adding that the fintech giant is currently in talks with BitGo, which helps investors store digital assets securely.

However, that report added: Talks could still fall apart and PayPal could opt to buy other targets.

Meltem Demirors, the chief security officer of the crypto asset manager CoinShares, has predicted that PayPal will seek to launch a stablecoin in the next six to 12 months. This would be a sting in the tail for Facebook, given how PayPal left its embattled Libra project.

Yes, there has been enthusiasm over PayPals plans, with the analyst Willy Woo suggesting that the service could easily treble Bitcoins user base. But not everyone is cracking open the champagne.

People who buy crypto on PayPal wont be able to withdraw it to a wallet off the platform, prompting critics to say its another case of not your keys, not your coins.

SatoshiLabs, the team behind the Trezor hardware wallet, wrote: If millions of newcomers are onboarded to Bitcoin by PayPal, there could be a very serious information gap that jeopardizes their experience and undermines key principles of cryptocurrency.

It is also concerned about how PayPals clout in electronic payments will be interpreted as expertise in crypto.

Given how Satoshi Nakamotos vision was to decentralize finance and remove middlemen, some crypto purists will also be horrified at PayPal wading into the space.

But there are other practicalities to worry about and one of them is tax. Every sale of cryptocurrency becomes a taxable event, especially if its sold for more than it was bought for. Its very possible that the implications of this could be lost on crypto noobs.

And in other news

Of course, there was plenty of other news in the crypto and blockchain sector this week.

The Chicago Mercantile Exchange quietly overtook BitMEX to become the worlds second-biggest futures market buoyed by rising institutional demand. All this came as the crypto fund manager Grayscale Investments increased its assets under management by $1 billion in the space of a week.

Data from Messari showed that daily transaction volumes on the Ethereum network are twice those of Bitcoin putting the blockchain on track to process $1 trillion this year. And in news thatll make exasperated DeFi users breathe a sigh of relief, a ConsenSys developer predicted that the Ethereum 2.0 beacon chain genesis will happen in the next six to eight weeks.

Speaking of DeFi, the funds locked in protocols surged by $1 billion as analysts predicted we could see a bull run following on from the U.S. election. Meanwhile, the U.S. acting comptroller of the currency predicted that DeFi could render the financial services offered by banks obsolete just like email disrupted the postal service.

There goes wBTC. The majority of wrapped Bitcoin is custodied by BitGo. PayPal is not a good actor in this space. Position accordingly.

If millions of newcomers are onboarded to Bitcoin by PayPal, there could be a very serious information gap that jeopardizes their experience and undermines key principles of cryptocurrency.

Crypto is about financial freedom. Its modern money that anyone anywhere can truly control. While were excited to see a new audience gain access, a non-custodial approach limits opportunity to self-custody your crypto or transact freely.

This is definitely a bullish sign for Bitcoin and other cryptocurrencies. Crypto is all about trust, and PayPal has a very high level of trust with its users […] If the UI/UX of the service is done right, we will see millions of new users join each month.

We are eager to work with central banks and regulators around the world to offer our support, and to meaningfully contribute to shaping the role that digital currencies will play in the future of global finance and commerce.

Unsurprisingly, the Winklevoss twins were brimming with enthusiasm in the wake of PayPals announcement.

Tyler Winklevoss tweeted: PayPal is an important bridge between the mainland and the island of crypto. The diaspora from legacy finance is happening and this is the kind of infrastructure that will help make that happen. Soon there will b a flippening and crypto will b the mainland & fiat the island.

This week, the twins doubled down on their prediction that Bitcoin will eventually hit $500,000, telling podcast host Peter McCormack that its a matter of when, not if.

I would sort of contend that $500,000 Bitcoin is actually pretty conservative and the game hasnt even really started, Cameron noted.

A ransomware attack targeting the government systems of Georgias Hall County impacted key voting infrastructure, it has been revealed.

Critical systems within its networks were affected, and CNN says the incident may be the first ransomware attack in the 2020 election.

Officials said the countys voter signature database and voting precinct map were heavily impacted by the hack but stressed that the voting process for citizens is unaffected.

Brett Callow, from the cybersecurity firm Emsisoft, told Cointelegraph: There is a very real risk that they may shake voter confidence in the integrity of the vote, especially as confidence may already be quite low.

Theres still no sign of OKExs cryptocurrency withdrawals returning to normal nine days after they were suddenly suspended.

The ongoing suspension has been puzzling to many, but the exchanges representatives maintain that the move was solely because one of the companys private key holders has been cooperating with a Chinese public security bureau.

OKEx CEO Jay Hao has told Cointelegraph that the company is determined to reinstate withdrawals as soon as possible, adding: We wholeheartedly apologize for this.

Some users are starting to warn that their patience is wearing thin, expressing frustration at the lack of transparency surrounding whats going on.

One tweeted: Where is your CEO Jay Hao? He has to interact and give updated info frequently. When something happens with Binance, CZ tweets every hour.

And another wrote: Its a bit weird one of the biggest exchanges in the world isnt letting us withdraw money for so long.

The creator of the blockchain-based data storage platform Filecoin has dismissed allegations that miners of its token have gone on strike as nonsense.

Refuting the claims, Juan Benet claimed on Twitter: What is happening is that miners are growing slower than before launch. This is in great part because the network is no longer subsidizing their pledge and fee costs fees cost real money now, and miners need to match growth rate to token flow.

It had been reported that five of the largest Filecoin miners turned off thousands of rigs to protest the blockchains economic model, which means that miners are required to stake FIL as collateral when producing a block. The problem is that many miners are apparently coming up short in the number of tokens needed.

Mining with home rigs is back, so Elena Perez takes a look at what those interested need to know to put together their own rig at home.

Frozen out? Bitcoin price correlation to other assets still undefined

Fidelitys report claiming Bitcoin is a non-correlated asset has sparked discussion, but as Benjamin Pirus reports, not all agree with the assessment.