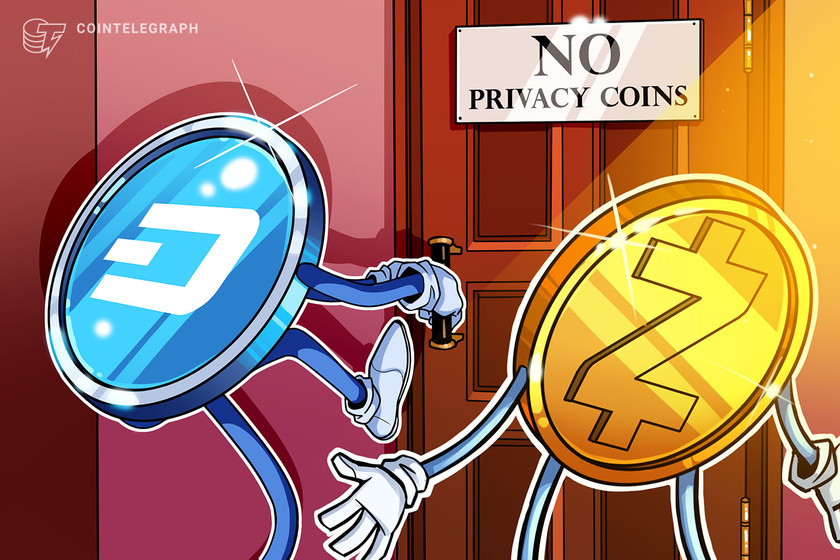 The delisting of Dash and Zcash has some wondering about the future of privacy coins on major exchanges.

It shouldn’t come as a surprise that regulators are starting to pay close attention to cryptocurrencies this year. For instance, as the price of Bitcoin (BTC) continues to soar, it’s predicted that regulators will start taking direct action – possibly even banning Bitcoin completely.

While the ban may sound extreme, regulators have recently honed in on the use of privacy coins like Monero (XMR), Zcash (ZEC) and Dash. For example, in September this year, the United States Internal Revenue Service offered a bounty of up to $625,000 for intelligence firms that could break the untraceable privacy coin Monero.

Moreover, on Oct. 8, William Barr, the attorney general for the U.S., announced the release of a document entitled, “Cryptocurrency: An Enforcement Framework.” Produced by the attorney general’s Cyber-Digital Task Force, the publication discusses a framework to combat the “emerging threats and enforcement challenges associated with the increasing prevalence and use of cryptocurrency.”

Although the document discusses cryptocurrencies in general, the report specifically addresses issues involving “anonymity enhanced cryptocurrencies,” also known as AECs or privacy coins. The document notes examples of these privacy coins to include Monero, Zcash and Dash, stating that they undermine the Anti-Money Laundering measures:

“The acceptance of anonymity enhanced cryptocurrencies or ‘AECs’ — such as Monero, Dash, and Zcash — by MSBs and darknet marketplaces has increased the use of this type of virtual currency. As discussed above, because AECs use non-public or private blockchains, use of these cryptocurrencies may undermine the AML/CFT controls used to detect suspicious activity by MSBs and other financial institutions.”

Following the release of the cryptocurrency enforcement framework, ShapeShift, a Swiss cryptocurrency exchange platform that runs operations out of Denver, Colorado, has delisted the very same three privacy coins mentioned.

While ShapeShift declined to comment on the matter, Ryan Taylor, CEO of Dash Core Group, told Cointelegraph that the Dash network was labeled as a privacy coin in 2014. According to Taylor, the assumptions behind this label — or even more fundamentally what the label of privacy itself even means – has never been revisited. “We aim to correct this inaccurate categorization,” he remarked.

Taylor further explained that there has been no further developments made since the delisting of Dash on ShapeShift. However, he remains optimistic about partnering with the non-custodial exchange to get Dash relisted. He elaborated:

“We have had success in getting relisted on a number of exchanges in various jurisdictions. These exchanges include eToroX in the EU, Kraken and CoinSpot in Australia, and OKEx in Korea.”

Yet due to the recent regulations around privacy coins, getting relisted may be more difficult than before. Miko Matsumura, a co-founder of Evercoin — a mobile wallet and exchange — told Cointelegraph that the recent U.S. cryptocurrency enforcement framework focuses so much on privacy coins due to the notion that they enable users to evade sanctions set by the U.S. Office of Foreign Assets Control. “ShapeShift was a bit slow to adopt Know Your Customer measures in the first place, so regulatory pressure must be high,” he said.

Aside from the challenges of getting relisted, other cryptocurrency exchanges may follow suit and start delisting privacy coins. Nathan Catania, a partner at XReg Consulting — a crypto-asset regulatory firm — told Cointelegraph that it’s likely many crypto exchanges will start delisting privacy coins. “This could be due to outright bans, or greater regulatory pressures for virtual asset service providers to treat privacy coins as higher risk for Anti-Money Laundering purposes,” he said.

However, some experts beg to differ. Bill Barhydt, the CEO of Abra — a peer-to-peer payments platform that supports over 70 cryptocurrencies including Dash — told Cointelegraph that Abra works closely with third-party custody partners. He mentioned that, to his knowledge, these partners have no plans to delist any cryptocurrencies that are widely used in the marketplace today. Dash would fall into this category, as its current market cap rank is number 31 on CoinGecko, with 9.8 Million coins in circulation.

In addition, many compliant crypto exchanges in the United States continue to support privacy coins. Justin Ehrenhofer, a compliance analyst at DV Chain — an affiliate of Chicago-based proprietary trading firm DV Trading — told Cointelegprah that exchanges, such as Kraken, which has a Special Purpose Depository Institution banking charter in the state of Wyoming, support many common privacy coins. He further noted that Gemini supports shielded Zcash deposits and withdrawals, pointing out that the risk-based approach Gemini takes for Zcash should apply to shielded deposits and withdrawals of other assets like Monero, too.

Is Dash even a privacy coin, and does this matter?

Speculations aside, Dash Core’s Taylor ultimately believes that Dash is no more of a privacy coin than Bitcoin: “Most people would say that Bitcoin is clearly not a privacy coin, so it’s informative to evaluate where Dash would fall on this privacy spectrum compared to Bitcoin.” He went on to add: “Bitcoin is absolutely higher risk than Dash from a regulatory perspective for many reasons, both technical and in terms of its real-world use.”

This notion was also specifically stated in an AML regulation report released by international law firm Perkins Coie. Taylor further expressed that the label of a privacy coin is meaningless, as different technologies provide differing degrees of privacy to different participants. According to Taylor, what is relevant for this specific case is how exchanges and other money services businesses can address the AML compliance risks for transactions for the cryptocurrencies they support.

It’s also important to point out that Bitcoin continues to be the most widely used cryptocurrency on darknet markets. John Jefferies, the chief financial analyst at CipherTrace — a blockchain intelligence firm — further told Cointelegraph that the line between privacy coins and Bitcoin is not binary since privacy enhancements like CoinJoin and layer-two networks can also enhance the privacy of Bitcoin transactions.