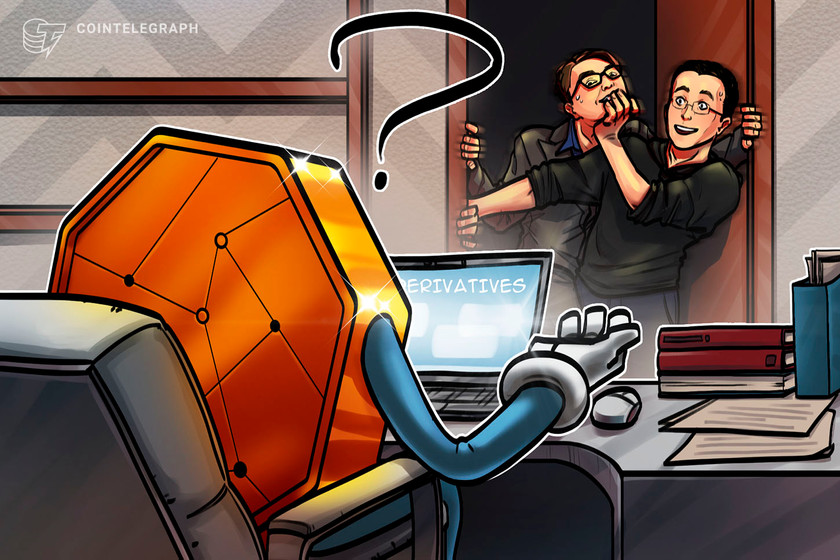 Despite Binance recording the highest crypto derivatives volume in September, OKEx seems to be fighting back.

At the start of October, the crypto market was faced with extremely tumultuous financial conditions, thanks in large part to the recent filings against BitMEX, which saw the company’s top brass being indicted by the United States Commodity Futures Trading Commission on several charges. Not only that, but just a few days before the BitMEX scandal came to light, cryptocurrency exchange KuCoin was hacked to the tune of over $275 million on Sept. 26.

The data, released by U.K.-based crypto analytics firm CryptoCompare, took into consideration the trading volume of the aforementioned exchanges and found that Binance drew in a total of $8 billion more in trade volume than its closest competitor, Huobi, which raked in $156.3 billion during the same time period, while OKEx drew in around $155.7 billion.

Binance and OKEx demonstrated relatively similar derivatives volumes during July and August; however, it’s worth noting that during this same time window, Huobi had quite a margin on both its closest rivals. This then poses the question of how Binance was able to make such strides in just one month to overtake Huobi and OKEx so quickly. Providing his thoughts on the subject, Jay Hao, CEO of OKEx, told Cointelegraph:

“Binance held a $1.6 million trading competition on its futures exchange to mark its one year anniversary in September. This may have led to the sudden rapid spike in volume and also explain why the OI is so low compared to OKEx, as traders did not open long positions but were competing for their share of the prize pool.”

According to a Binance spokesperson, one of the key drivers that helped spur the recent market performance was user feedback, especially in regard to the less-than-ideal trading experiences that many customers had previously faced on other derivatives exchanges: “They told us about system outages or instability, interfaces that weren’t user-friendly, and that all the exchanges then were only offering incentives for market makers, which created a lopsided environment that disadvantaged market takers.”

Another event that may have bolstered market confidence in Binance’s derivatives arm was Black Thursday, or March 12, a day that greatly impacted both traditional and crypto markets. While many other derivatives exchanges encountered significant outages, Binance offered uninterrupted service to its customers, thereby potentially cementing confidence in the platform.

Lastly, during the course of summer this year, a number of users moved from Bitcoin to various altcoins and DeFi-based derivatives. During this transitional phase, Binance Futures expanded its offerings pool. The Binance spokesperson noted: “There’s also better awareness on how we balance Bitcoin and altcoins; altcoin futures volumes make up around 40% on Binance. We think we understand and reflect market conditions well.”

While September saw Binance lead the derivatives roost, heading into October, OKEx is leading all Bitcoin futures exchanges in terms of Bitcoin futures open interest. In its most basic sense, open interest signifies the total number of outstanding derivative contracts — be it options or futures — that are yet to be settled. From a more technical standpoint, open interest serves as an indicator of options trading activity and whether or not the total amount of money coming into the derivatives market is increasing.

On Oct. 4, OKEx’s 24-hour trading volume was over the $1.3 billion mark, dwarfing the $1.23 billion trade volume of its closest competitor, Binance Futures. Additionally, as can be seen from the chart above, open interest on OKEx is the highest by a wide margin, with the other five exchanges performing similarly to one another.

Such positive statistical data seems to suggest that BTC futures and options sentiment has remained quite strong, despite the recent BitMEX lawsuit and KuCoin hack. Not only that, but OKEx’s futures open interest has risen from $850 million to $930 million since the start of October, something that is potentially indicative of a bull run in the near future. Providing his insights on the subject, Hao told Cointelegraph:

“Trading volume is a very important metric but it is not the only metric to keep in mind when assessing the overall health and popularity of an exchange. OKEx has been laser-focused on DeFi lately as well and this move from Binance in derivatives is a signal for us that we cannot take our attention from our flagship product.”

On Oct. 11, the United Kingdom’s Financial Conduct Authority — the country’s principal finance regulator — issued a blanket ban prohibiting crypto service providers from selling derivatives and exchange-traded notes to retail investors. While the U.K. derivatives market may not be large in comparison to others, the fact that a prominent regulator such as the FCA continues to claim that “cryptoassets are causing harm to consumers and markets” is rather alarming for the industry.

The government agency is still alleging that digital assets have no inherent value — an argument that has been used against crypto since its inception. Moreover, another reason for the ban is the “extreme volatile nature” of crypto, which seems like another unjust evaluation considering the same can be said about many traditional stock options. The FCA claims that retail investors “do not understand enough about the derivatives market,” so there is no real need for them to invest in such offerings.

That being said, it is worth remembering that when the ban was proposed in July last year, it generated a total of 527 responses from various companies that sell derivatives as well as crypto exchanges, law firms, trade bodies and other entities. In a 55-page report released by the FCA, a staggering 97% of respondents are shown to have opposed the proposal.