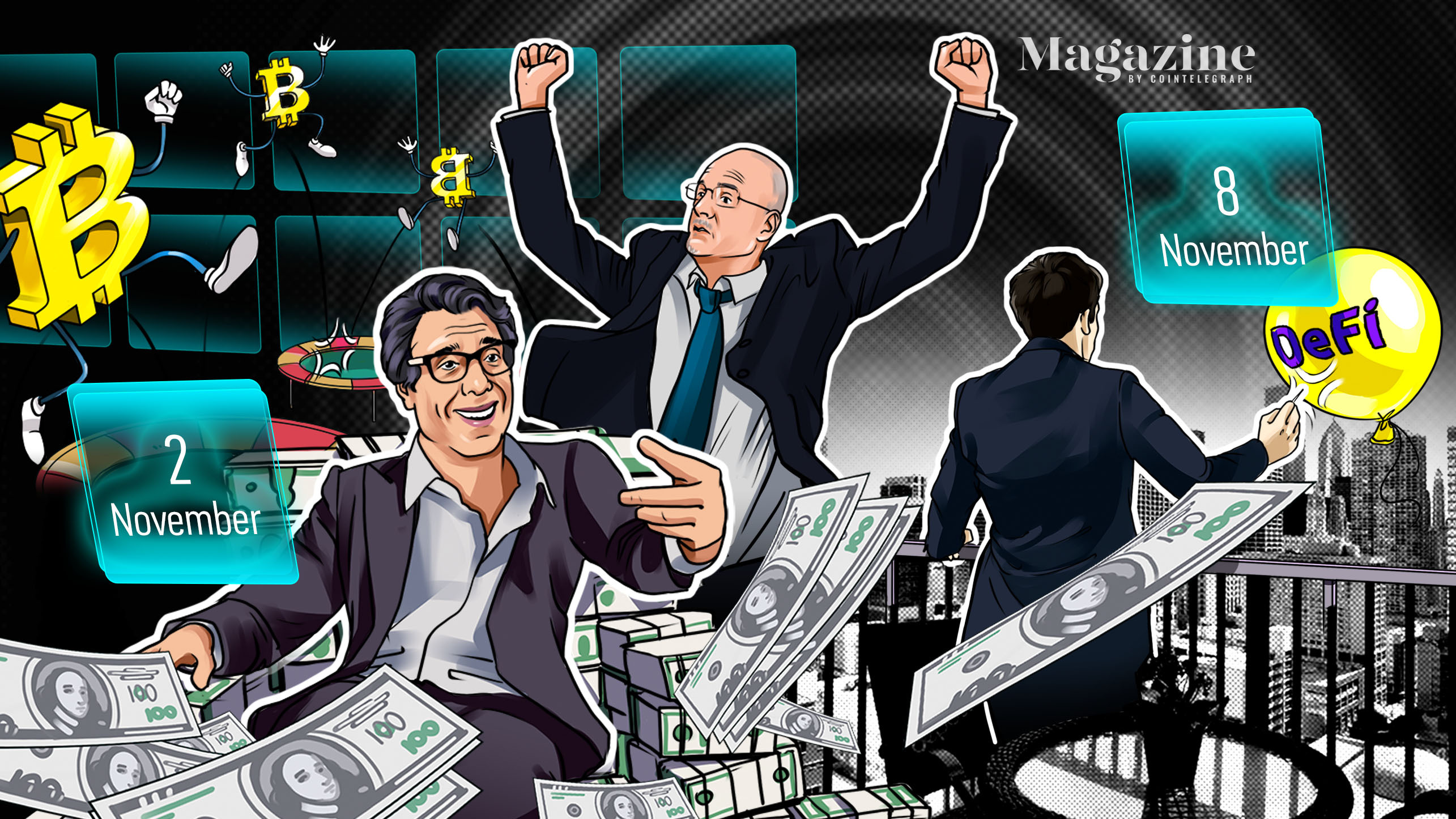 Its been another extraordinary week in the crypto markets. Over the course of Thursday, BTC surged by more than 10%. As well as breaching $15,000 for the first time since January 2018, the worlds biggest cryptocurrency romped to highs of $15,950.

To understand how significant this is, data from Messari shows that BTC has only been above this price point for 0.4% of its existence. A rare event indeed.

Cointelegraph analyst Michal van de Poppe said Bitcoin was nearing the final hurdle before a new all-time high can be reached, with one last resistance zone between $15,800 and $16,800 standing in its way.

However, he cautioned: The probability of a breakthrough in one go is not high, given that the price of Bitcoin has already surged by more than 50% in recent weeks.

Not all analysts agree. Some believe BTCs dazzling rally may not stop at $16,000, with the number of Bitcoin held on exchanges continuing to drop.

Bitcoin has cultivated a reputation of being a safe haven asset, meaning that investors tend to flock to it during times of uncertainty.

We saw uncertainty by the bucketload this week. BTC appreciated steadily when the U.S. election result wasnt clear on Wednesday and as ballots continued to be counted. Donald Trump also claimed, without evidence, that many votes were fraudulent.

But look what happened on Saturday when major news outlets officially projected that Joe Biden would be the next president of the United States. Bitcoin fell by 5.67% in the hours that followed. And then it bounced back again in less than 24 hours.

So does this mean the crypto markets fear a Biden presidency? Love the idea? Don’t know what to think? Or are we just seeing heat leave the market now that the results are clearer? And whats next for BTC?

Well, Bidens election brightens the prospect of a stimulus package by the end of the year and this could positively affect Bitcoin, boosting investor appetite for high-risk assets. Analysts also anticipate the U.S. stock market to recover now that the results have been confirmed.

Theres still something we dont know: the president-elects views on Bitcoin. For now, it really isnt a big enough issue to warrant his attention, Compound Finances Jake Chervinsky said.

Bitcoin at $15,000 is now bigger than PayPal, Coca-Cola, Netflix and Disney

Early September seems like a lifetime ago now, doesnt it? Back then, Bitcoin was hovering at about $10,000, with a market cap of approximately $190 billion.

Fast forward to now, and BTC appears to have found support at $15,000. This has also helped Bitcoins market cap rise by 50% to $280 billion and it means the worlds biggest cryptocurrency is now more valuable than most major companies.

Data suggests that, if BTCs valuation is compared with publicly listed firms in the U.S., it would be the 18th largest. This dwarfs the likes of Verizon, PayPal, Disney, Netflix and Bank of America.

Bitcoin could now end up setting its sights on overtaking Home Depot, which is in 17th place with a market cap of $306 billion. If BTC rises further and grabs 16th place, it would also demote Mastercard sending a powerful signal about where the future of money lies.

That said, BTC has a long way to go before it can catch up with Apples $2 trillion market cap, which makes it the most valuable company in the world. For Bitcoin to eclipse this, wed need to see a price per coin of $120,000.

Bitcoins time in the spotlight has been bad news for altcoins and it appears to have taken the shine off DeFi, too.

Binances DeFi Composite Index is now trading under $400 a 60% decline from all-time highs. To make matters worse, most DeFi tokens have erased 70%90% of their gains since early September.

The exchange also said that its been an underwhelming month for large-cap cryptos such as ETH, XRP, BCH and LTC, all of which only eked out modest gains in October.

That said, it isnt all doom and gloom for DeFi. Although the value of governance tokens has taken a beating (perhaps unsurprising given how some of them, such as YFI, were designed to be worthless), the total value locked in protocols hasnt crashed. It currently stands at $12.16 billion not far off the record highs seen in late October.

Bitcoins surge could tempt traders to take some profit, and all of this could result in a pullback.

But the bigger danger is this: With Bitcoin prices touching their highest levels in 33 months, were beginning to see greed seep into the crypto market once again.

The latest Fear and Greed Index rating is flashing a score of 82, placing it firmly into the Extreme Greed category. Earlier this week, the score hit 90. The last time it was this high was last June, when it reached 92 as BTC powered to 2019 highs of $14,000.

As billionaire and former hedge fund manager Mike Novogratz noted: The hardest thing to do in a bull market is to sit. My pal Paul Jones calls it the pain of the gain. This is a $BTC bull market. Your job is to sit on your hands and lock away your phone.

All eyes may be on Bitcoin and the surge past the $15,000 level. However, the recent development update related to Ethereum may result in some capital rotating back into Ethereum and its broader ecosystem.

Regulation is certainly going to be an area of focus in the crypto space going into this next year. Its only a matter of time before an increasing number of jurisdictions adhere to regulations.

All in all, the sentiment is heavily bullish at this point, with the price at multi-year highs and only one major resistance level remaining at $16,000 before a new all-time high comes into play.

Thanks for flying with us today ladies and gentlemen. Off to the left youll see weve just passed $15K #Bitcoin and coming up on the right youll see $16K bitcoin. Please make sure to fasten your seatbelts as we begin our ascent to the moon.

Rising prices during an uptrend while open interest is also on the rise could mean that new money is coming into the market.

If all of this excitement wasnt enough, Bitcoin has also officially broken a new record after trading above $10,000 for 100 consecutive days.

Now, a well-known analyst believes BTC could go parabolic in 2021 if it follows its behavior after previous halvings.

Bloomberg Intelligences senior commodity strategist, Mike McGlone, says its a simple matter of supply and demand. The number of new Bitcoin being mined fell yet again in May, yet appetite for the crypto among institutional investors is soaring.

New highs are a next potential iteration and may be only a matter of time unless something we dont foresee trips up the trend of greater adoption and demand vs. limited supply, he predicted.

I destroyed my life Uniswap trader spends $9,500 in fees on $120 transaction

Away from Bitcoin, lets have a look at some FUD stories. And we begin with a clumsy trader who says they have destroyed their life after inadvertently paying $9,500 in fees for a $120 transaction on Uniswap. Whoops.

On Reddit, ProudBitcoiner revealed that they accidentally stumped up 23.5172 ETH in fees after getting the Gas Limit and Gas Price input boxes confused in the MetaMask wallet.

Uniswap is a non-custodial exchange for ERC-20 tokens, meaning that trades are executed directly from a users wallet, allowing them to manually set the gas prices they are willing to pay for a transaction.

Other Reddit users are now calling for MetaMask to introduce safeguards that would force users to confirm a transaction when the inputted gas price significantly exceeds the estimated price calculated by the wallet.

Ernst & Young has received $171 million worth of claims from customers who lost their funds when the doomed crypto exchange QuadrigaCX collapsed. Theres just one problem: The trustee only has $29.8 million in funds to distribute.

Gerald Cotten, the founder of QuadrigaCX, died in India of complications linked to Crohns disease. He was the only person who had keys to the exchanges wallets and in recent months, speculation has grown that he may not be dead at all.

Ernst & Young also noted that Cotten traded using customer funds, which has likely contributed to the discrepancy between assets and liabilities.

An anonymous crypto user has just moved 69,370 BTC from an address associated with the Silk Road darknet market.

According to CipherTrace, the transfer was made in two transactions. The crypto user first sent 1 BTC, likely as a test transaction, before moving the bulk of the coins.

The blockchain intelligence firm speculated the anonymous user made the transactions to stay up to date with the Bitcoin network by switching between address formats.

Its possible that hackers may have been responsible for moving the funds.

Bitcoin price nears $16,000, but its Ethereum that may shine in November

After Bitcoins strong breakout above $15,000, analysts are looking toward Ether as the market sentiment around Ethereum strengthens.

Coinbase, Gemini and others join forces to combat human trafficking

The cryptocurrency sector is overflowing with dead projects

Blockchain technology is just a tool that solves a problem, it cannot be the goal of the entire project.