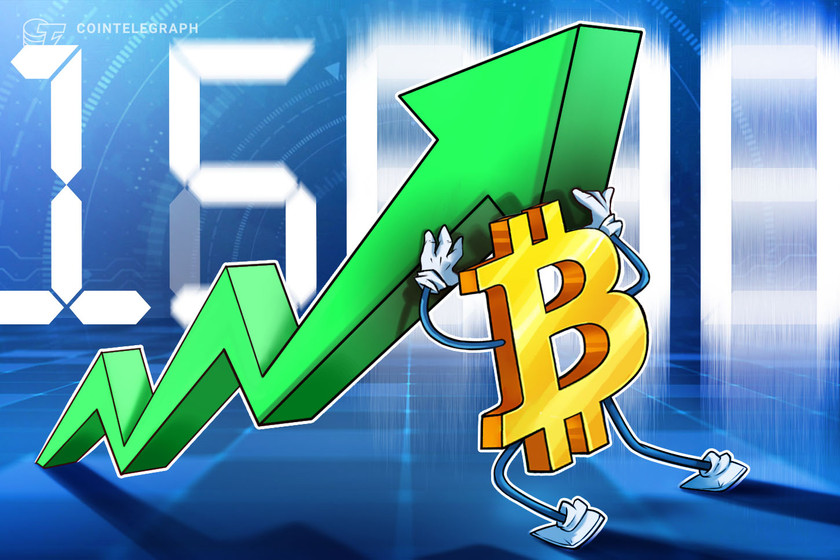 Following highly volatile Bitcoin price action in the aftermath of its vaccine-induced drop, crypto traders explain where BTC is headed next.

The price of Bitcoin (BTC) has seen extreme volatility in the past 24 hours. After the Dow Jones Industrial Average abruptly rose by more than 800 points, BTC plunged in tandem with gold. Within five hours of achieving a four-day peak at $15,840, the dominant cryptocurrency abruptly plummeted 6.5%. Following the correction of BTC, analysts and traders remain divided on its near-future prospects.

The short-term pullback of Bitcoin, which happened within several hours, was beneficial for BTC for three key reasons. First, it neutralized the derivatives market, which is no longer overheated. Second, it led to a healthy rejection of the $16,000 resistance level. Third, it showed that even after a major price drop, overall buyer demand remains intact.

On Nov. 9, Bitcoin saw a sharp drop from $15,840 to $14,805, which occurred shortly after Pfizer announced its optimistic COVID-19 drug trial results, having tested nearly 44,000 individuals and demonstrated 90% effectiveness. Subsequent to the announcement by Pfizer, major U.S. stock market indices rallied by around 3%.

The highly anticipated breakthrough in the vaccine’s development caused Bitcoin and gold to rapidly drop. Capital flew out of safe-haven assets and stores of value to risk-on assets, like stocks, in a short period. Consequently, gold recorded an intraday 4.5% drop, which is rare for an asset of its size. It sparked the appetite for stocks and other risk-on assets, which gave Bitcoin whales a narrative to sell.

When Bitcoin initially started dropping, whale inflows into cryptocurrency exchanges began to increase. This meant that high-net-worth investors holding large amounts of BTC were selling. Since Bitcoin recovered back above $15,300 within six hours, whales likely bought back at a lower price. Based on the trend, it’s probable that whales used the narrative of the vaccine-induced correction to sell at resistance and buy at a lower price.

Speaking to Cointelegraph, Bitcoin technical analyst Eric Thies said that Bitcoin has essentially been fluctuating between two levels: the $14,500 support and $16,000 resistance. Bitcoin rejected heavily as it approached $16,000, indicating that there are large sell orders present at the $16,000 resistance area. If BTC sees some consolidation under $16,000, Thies noted that it would be beneficial for buyers:

“We’ve seen Bitcoin breaking previous 2019 resistances for almost two weeks now, and with price rapidly fluctuating between $14.5K and $16K, bulls are in need of a consolidation period before we rapidly accelerate towards hitting the 2017 high of $19,500.”

The short-term drop of Bitcoin was also critical to reset the futures market. Prior to the drop, the funding rate of BTC futures contracts across major exchanges was well over the average 0.01%. This meant that the vast majority of the market was heavily longing or buying Bitcoin. After the correction, the funding rate returned back to 0.01%, showing that the futures market is no longer overheated.

According to Ki Young Ju, CEO of CryptoQuant, the long-term prospect of Bitcoin remains positive. Ki told Cointelegraph that the exchange inflow mean shows the Bitcoin market is “still in a strong buy zone.” The exchange inflows show the amount of BTC that traders and investors are transferring to exchanges. When this figure remains low, it typically indicates lower selling pressure on exchanges.

However, Ki said that after Bitcoin’s drop, BTC inflows from whales have been spotted. While this is an ostensibly bearish trend, the analyst noted that whales tend to sell BTC regularly during bull trends. Since whales seek liquidity, they prefer to sell when the price is going up to ensure there is enough buyer demand in the market. Although the trend could be bearish, depending on one’s perception, Ki said it’s unlikely to be a market sentiment reversal, for now:

“After the price plunge, there have been subsequent exchange inflows by whales for two reasons. First, in the bull market: To sell it at the local high. They sell when the retail investors are active on exchanges. Second, in the bear market: To sell it if the unusual fear-sell happens. I would say we’re in the number 1 case. We still have a room till when retail investors are active on exchanges.”

Large dips to be expected during new record-high bull runs

Analysts and traders are generally echoing a similar stance in that large dips during Bitcoin bull trends are normal. Thies explained that he expects Bitcoin to achieve a new all-time high at $20,000 in January 2021 or February 2021. Still, Thies emphasized that large dips have always occurred during previous bull cycles. Even during the 2017 rally, when BTC neared $20,000, BTC saw several short-term 20%–30% drops.

If Bitcoin continues to consolidate with decent momentum, Thies said buyers are safe from a major drop. Unless BTC sees a lower low formation, which occurs when BTC drops below the most recent bottom, the technical analyst said BTC could avoid a deep correction:

“At this point, I see BTC hitting $20K in January or February, which will mark the actual start of the new ‘crypto bull run’, BUT, expect a dip to as low as $12.8K at some point prior. Bulls will benefit from any consolidation or periods like this, as it keeps the market from over buying too early. Bulls are technically ok until we see a lower low, which at this point would be near even $11.5K but that’s a low probability of happening it seems.”

The bull case for Bitcoin

Various on-chain data metrics show that both miners and whales have been selling BTC. The Miners’ Position Index on CryptoQuant hit a yearly high on Nov. 5, indicating rising selling pressure from miners. Yet, the price of Bitcoin has stayed relatively stable above $15,000 throughout the past week, apart from several days.

This trend shows that new buyer demand is offsetting the selling pressure coming from whales and miners. According to analysts at Santiment, around $365 million worth of Tether (USDT) has moved to exchanges daily in the last seven days. Since most of the sidelined capital within the crypto market is stored in stablecoins, it suggests that new buyers are entering the market.

In the short term, however, one concerning metric that could cause Bitcoin to consolidate for longer is the relative unrealized profit/loss indicator. Philip Swift, the creator of educational platform Look Into Bitcoin, said BTC is hovering in the “greed” zone on the indicator, which, basically, measures how much unrealized profit investors currently hold.