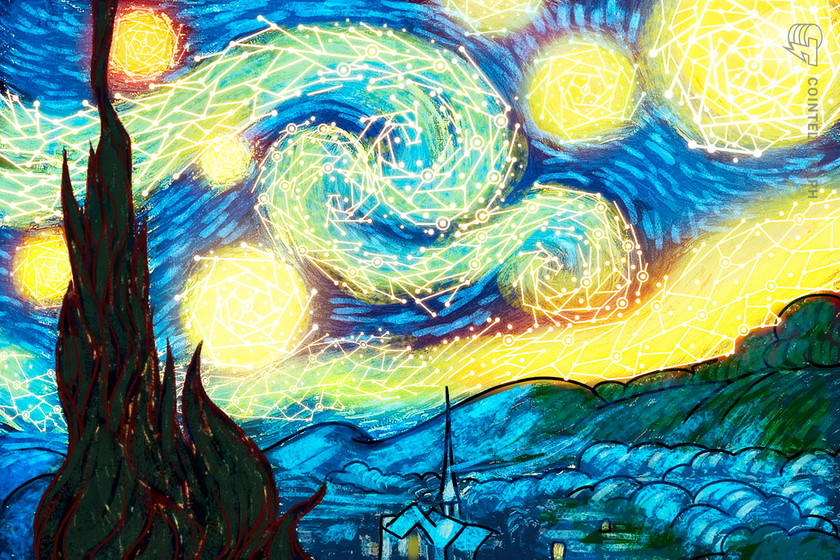 Crypto-artist Kevin Abosch on a recent ‘crime,’ the state of digital art, and a new generation of art collectors

On Friday, Kevin Abosch — an Irish conceptual artist who was among the first to use blockchain technology as a medium — reported that a dastardly heist had been committed in one of his on-chain installations, an Ethereum wallet-turned-artwork titled “Stealing The Contents of This Wallet Is a Crime” (2018).

In a Tweet the artist, whose work has been exhibited at The Hermitage, said that a Cryptokitty had been swiped from the freely-accessible address:

Hi @CryptoKitties/@dapperlabs – Someone tipped me that "IAMA Kitty" was sitting in the #crypto wallet of my artwork "Stealing The Contents of This Wallet is a Crime" (2018). I can confirm it has just been "stolen." #IAMA #IAMACOIN #IAMAKitty pic.twitter.com/vq1RmktSs0

“Stealing The Contents…” is one of what Abosch calls his “social experiments challenging value systems” — a conceptual framework especially fitting for the crypto world. Part of “Stealing The Contents…” included tokens deposited to the wallet from his “I Am A Coin” (2018) piece, in which Abosch tokenized himself in a process involving the artist’s own blood to distribute 10 million tokens with the ‘IAMA’ ticker.

He described “Stealing…” as a mutual playground for explorers, and participants largely responded with goodwill and good humor: Ethereum-savvy art fans played with the blood-tokens’ occult implications — for instance moving .666 of IAMA in and out of the “Stealing…” wallet, among other hijinks.

“I think people just wanted to interact with and therefore become part of the art in a sense,” said Abosch.

These ideals are precisely what made Friday’s theft seem so cruel. Even for a space rife with scammers, charlatans, and crooks, stealing a Cryptokitty — one named in honor of his work, no less — from a freely accessible wallet seemed unusually mean-spirited.

When asked in an interview if the theft upset him, however, Abosch began to laugh.

“Actually, I stole it,” he confessed.

The perversion of digital scarcity

Abosch explained to Cointelegraph that a friend told him the kitty had been deposited in the wallet, and given its name, “IAMA Kitty,” he assumed it was a gift intended for him from Dapper Labs.

Abosch made it clear, however, that this cat burglary would not be the start of a larger NFT collectibles or art collection. In fact, as the conversation turned to the state of blockchain-based art, he expressed dismay with a number of ongoing trends, starting with valuations of digital art being rooted primarily in their rarity.

“I find something perverse about engineering scarcity,” he said.

Bronze sculptures, he explained, are scarce because sculptors can only afford so much bronze — with real-world art, there are inherent resource-related limitations. Digital scarcity, on the other hand, is entirely artificial.

Likewise, the current wave of artists releasing their work as non-fungible tokens (NFTs) doesn’t impress him.

“Many so-called crypto-artists are minting NFT’s but are only using blockchain technology as a tool to engineer scarcity and as a platform to sell their work,” he said. “I’m not making a qualitative assessment of the work — only challenging the nomenclature. Of course, there are artists whose work deals thematically with cryptocurrency, blockchain technology […] which seems better suited to the term crypto-art.”

He went on to explain that pieces that use the technology in more innovative ways are what really excites him.

“What interests me more are pieces where blockchain is the method, where the soul or meat of the piece is integrally woven into the blockchain,” he said. “The NFT only speaks to the platform that facilitated the mint and the sale.”

The wave of speculators and collectors moving into NFT-backed art also seemed to leave him uncomfortable.

“I find that people buy art for one or more of three reasons: because they genuinely want to experience the work, as a form of social proof, or as an investment opportunity.”

Far too few, he implied, purchase art for the experience.

He bemoaned that between the medium, the artists, and the buyers, the current cryptoart landscape has effectively recreated the foulest qualities of the legacy art world — what he called “one of the most corrupt industries on the planet” — both fueled by avarice, ego, and hype.

A new generation of collectors

While Abosch’s complaints might strike some as the archetypal grumblings of an old head poo-poohing the new generation, he does see a bright spot among the NFT art madness: a forthcoming community of art lovers focused on on-chain work.

“I wonder when crypto-bros discuss the immaterial nature of their art, if they delve into the philosophical implications of materiality and ownership” he waxed. “There’s a whole younger generation of people who don’t seem hung up on the physical, though they still seem to crave the rare.”

Slipping back into a more sardonic tone, he went on to say the collectors better enjoy it, too, because at current prices they might be stuck with their purchases for a while.

Too many are buying as an investment, he said, hoping to resell at a later date among even more frenzied NFT-mania.

“I just don’t think there’s that much money floating around,” he cautioned. “There’s a perception that this is a gold-rush, but I’m not sure there’s gold in them thar hills.”

Regardless of his suspicions, he’ll allow himself at least one cute NFT collectible.

“My kids said they wanted a kitten. Let’s see how they react.”