October has barely started and the price action in the crypto markets has been both exciting and worrisome. Bitcoin (BTC) has seen a strong $10.9K rejection and a quick $10.2K bottom over the past week.

The whipsaw price action has been the norm over the past three weeks and is quite gruesome for the bulls and bears. Regardless of the reason behind these moves, the recent newsflow of negative crypto events has clearly spooked investors.

In the last two weeks KuCoin was hacked for $150 million, BitMEX was charged with multiple legal violations, John McAfee’s was arrested, and the UK’s  top financial watchdog decided to issue a ban on crypto derivatives exchanges. This was enough to break the ongoing 30-day correlation with the S&P 500 and also signals that market sentiment may have shifted.

The above chart shows how strong the S&P 500 correlation has been with Bitcoin throughout the year.

There were hardly any weeks where the price action diverged between both markets. The few exceptions that do exist were in the first week of September and over the course of the past six days.

To further understand if this divergence is caused by the growing interest in cryptocurrency or the lack of it, traders should check traded volume. 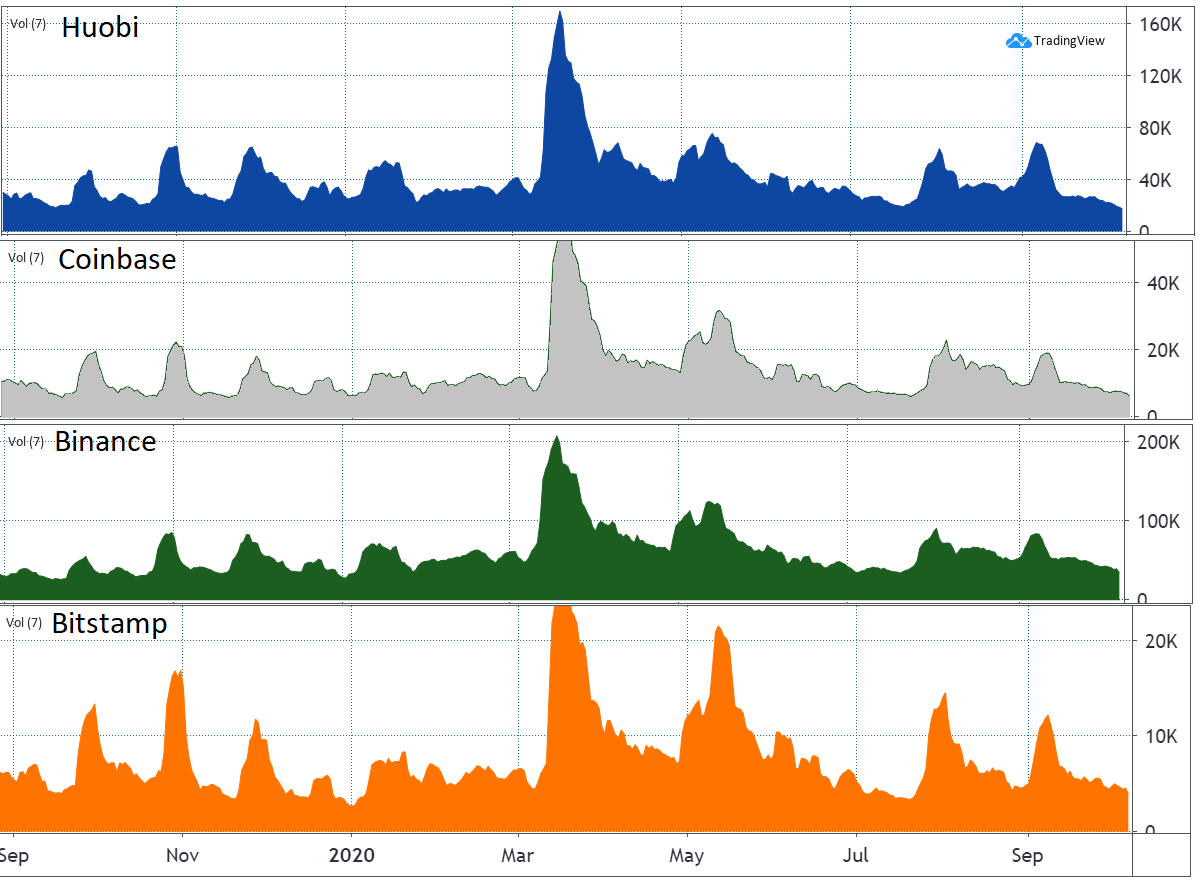 Volume has been dwindling on major exchanges, which is difficult to frame as a positive. This is clear evidence of investors’ interest, at least at the current levels.

One should not automatically conclude that traders are bearish exclusively due to volume metrics. For this situation to occur, both buyers and sellers must be unwilling to trade at the current price range.

Excessive leverage from either side will be reflected in the funding rate. This happens due to each perpetual futures contract having embedded margin usage fees.

Funding rates are usually changed every 8 hours to ensure there are no exchange risk imbalance and even though the open interest from both buyers and sellers are matched at all times, leverage can vary.

If buyers are using more leverage than sellers, the funding rate will be positive, and buyers will pay. The opposite occurs when future contracts sellers are the ones demanding more margin. 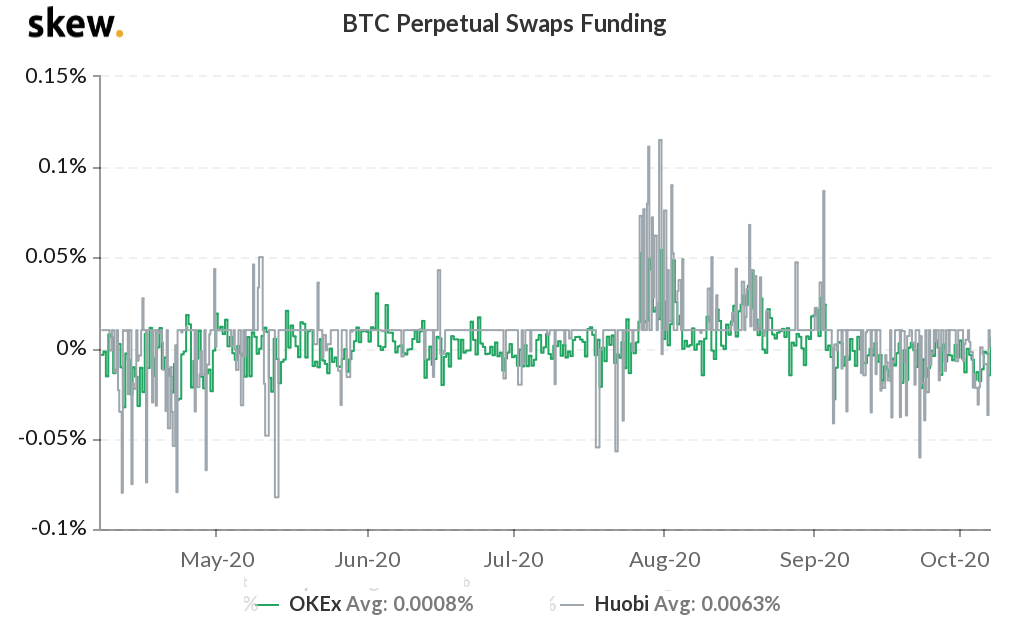 After a brief spike early-September, the funding rate has been either flat or slightly negative. A negative 0.05% 8-hour rate equals to 1% per week and although reasonably high, not enough to pressure traders to close their positions.

This doesn’t necessarily translate to bearish investors, but it does signal that futures contracts sellers are the ones using more leverage.

Top traders are neutral to short

Exchange-provided data highlights traders’ long-to-short net positioning. By analyzing every client’s position on the spot, perpetual and futures contracts, one can obtain a clearer view on whether professional traders are leaning bullish or bearish.

With this said, there are occasional discrepancies in the methodologies between different exchanges so viewers should monitor changes instead of absolute figures.

As the above chart depicts, OKEx traders have been net short since September 14. This happened while BTC was trying to break the $10,500 resistance. Assuming those traders entered short positions near that level, the maximum loss faced so far was 7%.

To assess whether this was an isolated or exchange-related movement, we have to compare data from other exchanges.

Although top traders at Binance haven’t entered a net short position, they were 10% net long on Sept.13 and have kept a similar level ever since.

As previously mentioned, exchanges have different methodologies for the longs-to-short index, and clients might hold more extensive (or smaller) BTC deposits there for various reasons.

Both lackluster volumes and a slightly negative funding rate indicate a lack of interest among buyers at the current levels. Meanwhile, top traders and net position data show the lowest long-to-short ratio in 10 weeks.

Even though this neutral to bearish stance has been kept since mid-September, the recent price action was not enough to produce bullish bets.

The current scenario is likely to resolve with either a short squeeze once BTC breaks $11,500, or it could amplify a downturn if bears manage to wrest control of Bitcoin’s price and momentum.