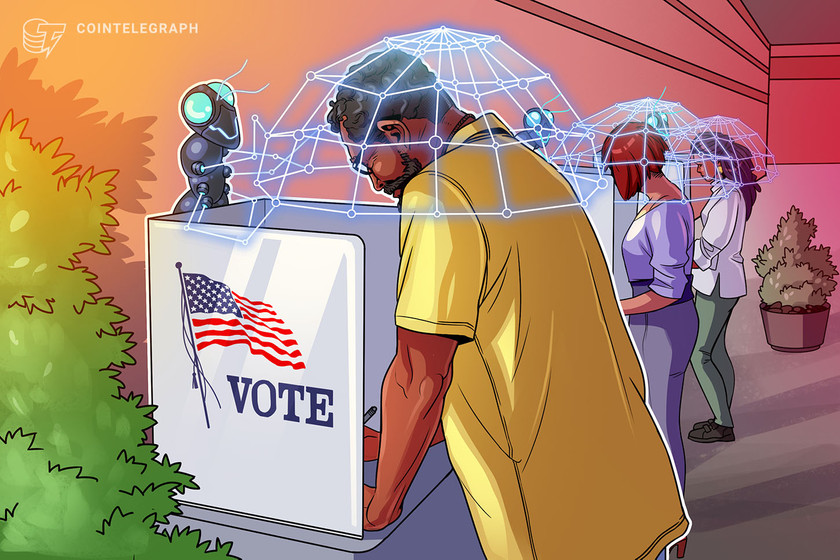 There is a way to give the voting system greater legitimacy and veracity: backing it with blockchain technology.

The COVID-19 pandemic has impacted people’s lives, the relationship between governments and citizens, and the entire world economy, and of course, it has had a major impact on the United States presidential election.

Due to social isolation, a large number of American voters opted to vote by mail, which increased vote counting time, led candidate and acting President Donald Trump to judicialize the electoral process with actions in several states, and triggered intense debates about the veracity and legitimacy of the current American electoral system.

Related: Blockchain voting systems could be the future, but current flaws persist

The current voting system in the digital age

Currently, many have proposed “mobile” voting as an alternative more compatible with current times, allowing people to vote without leaving their homes.

We are able to shop online, there are professions that are performed 100% remotely — which has intensified with the current pandemic — but electoral participation still needs to be exercised in person and in a specific location.

Now, does this not go against the digital age where information and technology serve as facilitators of communication, data transfer and business transactions?

Related: Electronic voting with blockchain: An experience from Naples, Italy

The combination of sequential hashing and cryptography in a distributed structure allows for the protection of voters’ identity and the verification of absolutely all votes entered in the blockchain platform, which can enable secure and transparent voting mechanisms with electoral vote monitoring.

Imagine how good it would be to check if your vote was actually counted for the candidate chosen by you, with the absolute guarantee of the secrecy of your vote? All of this is possible with blockchain technology.

Related: The promise and reality of blockchain’s role in global elections

Electoral jurisdictions in several U.S. states have tested mobile-application-based blockchain voting for state, federal and municipal elections — primarily to enable remote voting by military and civilian residents abroad via smartphones and tablets, rather than the traditional and mail, fax and paper methods.

West Virginia, for example, enabled mobile voting via blockchain for its state and federal elections back in 2018. Denver, Colorado; Utah County, Utah; and two counties in the state of Oregon also tested pilot projects for their 2019 municipal elections. In total, 29 counties in five states tested Voatz’s mobile voting app in official elections.

In all of the examples mentioned above, to the surprise of many and according to the authorities responsible for voting via blockchain, the electoral process proved to be easier and more accessible.

For that reason, there are already advocates of the use of blockchain in American elections.

The positions of American political personalities on mobile voting

As a result of the good performance mentioned in the previous paragraphs, there are already notable figures in American politics raising the banner of blockchain mobile voting, such as Bradley Tusk — an American businessman, philanthropist, political strategist and founder of Tusk Philanthropies; Mike Queen — deputy chief of staff to the West Virginia Secretary of State; and Jocelyn Bucaro — director of elections in Denver.

But because we are living in the age of polarization, there are also people strongly against mobile voting, including voting via blockchain. In that sense, we can refer to Jeremy Epstein, a member of the Association for Computing Machinery’s US Technology Policy Committee. Here, it is important to note that Epstein — who was a vice chair of the committee at the time — co-authored an electoral security report titled “Email and Internet Voting: The Overlooked Threat to Election Security,” which was developed in conjunction with Common Cause, the National Election Defense Coalition and the R Street Institute.

The report points to blockchain and internet voting as a target for online attacks by foreign intelligence, saying the transmission of ballots over the internet — including by email, fax and blockchain systems — makes them vulnerable.

A blockchain solution that can enable a virtual election in the U.S.

The Voatz application, for example, looks for vulnerabilities and signs of commitment or vulnerability from the start. If the app finds that a smartphone has been compromised, it does not allow the user to vote. If the application passes security tests and third-party tools linked to it, the voter is authenticated on their mobile phone by a fingerprint or facial recognition.

The voter then provides their government identification, usually a driver’s license or passport, and takes a selfie for further authentication. Finally, the voter touches the fingerprint reader of their cell phone to verify that the smartphone is actually in the voter’s hands. In this step, the Voatz application combines the selfie taken by the voter with the image of the identity document and, after rechecking all the registration information given, confirms that the voter can vote.

Cybersecurity in a blockchain vote

Regarding cybersecurity, as “all” software has vulnerabilities, it cannot be ignored that denial-of-service and distributed denial-of-service attacks are legitimate risks in a mobile vote. Therefore, it is important to look for backup methods for possible infrastructure failure in the case of a DoS attack on the mobile voting system.

The blockchain part of the process is the least worrying in terms of security. It is just one component of the voting process, which also includes the steps of identity security, verification and validation.

Blockchain, in the case of Voatz, is for the specific application for which it was built: to distribute voting records so that it is more difficult to attack remotely. It also has cryptographic audit evidence of each transaction.

The main security risk in voting via blockchain is in the interface with the electoral jurisdiction, where the ballot is also printed with a hash or encrypted key on top. After it is stored, it is finally digitized in the election systems and software ballot-reading systems. At this stage, the electoral process “is out of reach” for Voatz.

In addition to cybersecurity issues, another point in a blockchain vote that has been questioned is: How would the voting book be processed and the ballots verified in a blockchain solution?

Taking the Voatz app as an example again, it uses a 32-node blockchain infrastructure on Amazon Web Services and Microsoft Azure, each hosting 16 nodes in the United States. Cloudflare is among several companies that provide DDoS-protection services, and Voatz has said that the system employs end-to-end encryption and multi-factor authentication for infrastructure nodes.

Another blockchain voting solution was used in Colombia in 2016. “Blockchain Voting for Peace” is a case study by the Organisation for Economic Cooperation and Development of a referendum held in Colombia back then. In it, the nonprofit organization Democracy Earth Foundation creates a blockchain platform to allow Colombians living abroad to symbolically participate in the plebiscite on the peace treaty between the government and the Revolutionary Armed Forces of Colombia, commonly known as FARC. The interesting thing here is the possibility of democratic coverage provided by the blockchain.

From what we have seen so far, it is not an exaggeration to imagine that in the near future, many countries will see blockchain technology as an ideal voting method for a society that is increasingly digitized faster than ever.

However, even if the maturity of the technology is reached and it effectively brings greater legitimacy to the electoral process and veracity to the voting system, will we be able to overcome the cultural barriers and digital illiteracy that still exist in today’s world?

Tatiana Revoredo is a founding member of the Oxford Blockchain Foundation and is a strategist in blockchain at Saïd Business School at the University of Oxford. Additionally, she is an expert in blockchain business applications at MIT and is the chief strategy officer of The Global Strategy. Tatiana has been invited by the European Parliament to the Intercontinental Blockchain Conference and was invited by the Brazilian parliament to the public hearing on Bill 2303/2015. She is the author of two books: Blockchain: Tudo O Que Você Precisa Saber and Cryptocurrencies in the International Scenario: What Is the Position of Central Banks, Governments and Authorities About Cryptocurrencies?